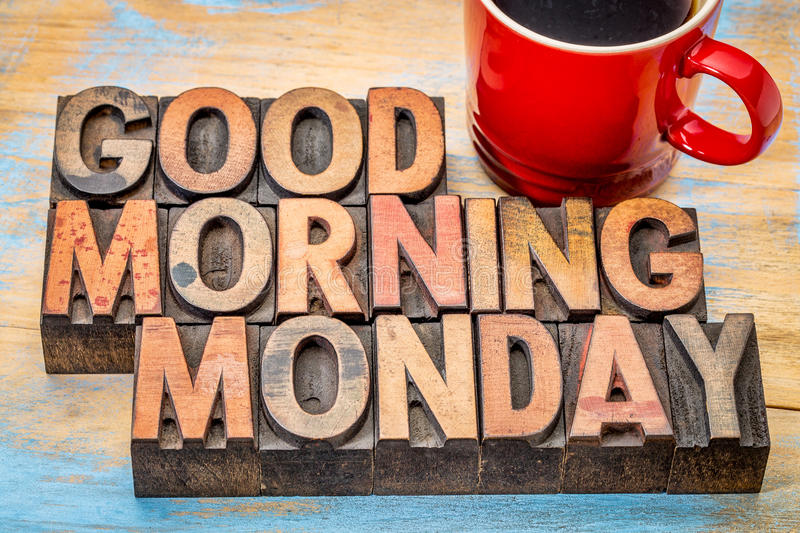 WTF? Or: A Comedy of (not-so-funny) Errors

I should have known the morning would have challenges when I left for my appointment with the Global Entry people at the Memphis International Airport. It’s only a 16-minute drive from our house in Harbor Town to the airport . . . usually. But nothing was “usual” about this morning. Even though I left 45 minutes before the appointment, in order to have plenty of time to park and find the office inside the airport.

First sign was my near-empty gas tank. We had driven to Franklin, Tennessee, over the weekend, in my husband’s car, and I hadn’t driven mine since we got home, and I didn’t realize I only had enough gas to get me TO the airport and not home after, or the other errands I had planned. So I pulled up to the gas station near our house, which sounds like it would be an okay place to get gas, but just over the bridge from Harbor Town into downtown Memphis, the Shell station is on a “sketchy” corner where lots of random guys hang out 24/7. It’s right across the street from the bus station. With all the violent events we see in the local news every night (sigh), many incidents are at gas stations, so I never gas up at night, or at “sketchy” locations. But I couldn’t chance running out of gas on the way to my appointment.

I pulled up to a pump just as another car pulled away, leaving me the lone customer. I got out of my car and right away a very large man started walking towards me, waving his hands (that’s weird, right?). Now, when I’m at a busy intersection in midtown Memphis where various homeless people are often begging alms, I don’t hesitate to roll down my window and hand them a couple of dollars. I’m big on giving alms. But this situation didn’t look safe, so I hopped back in my car and started the engine. Fortunately the guy walked away, so I got back out and filled my tank safely and headed to the airport, only 5 minutes later than I had planned.

As I approached the exit off I-240 North towards the airport, I saw a car almost completely demolished right at the exit ramp. Blue lights everywhere, and a sign showing that the exit was closed, so I kept driving south. I couldn’t remember the name of the next exit that would take me to the airport, but thankfully my GPS got me there, again, only about five more minutes late. That left me with 30 minutes to get to my appointment at the Global Entry office. No problem, right? Wrong. 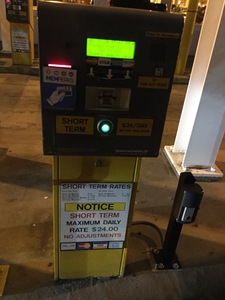 I can’t remember when I’ve parked in Short Term Parking at the Memphis International Airport. There are two lanes. I took the left lane. As I pulled up to the automated machine, I followed the directions and put my credit card into the machine. Then it said to push the GREEN BUTTON for a ticket, so I did. Nothing happened. What I didn’t notice was that the gate had already opened, and I could have driven through. But I was all about the GREEN BUTTON and NO TICKET. So I tried again. I inserted my credit card again, and again pushed the GREEN BUTTON. This time, the machine ate my credit card. So I pushed the button which indicated it would call someone for help. It did. She explained that my credit card IS the TICKET, and I should NOT have inserted it again. She asked me to pull my car up beyond where the gate was open, get out, and walk back to the machine. I did. She asked if my credit card had been ejected from the machine. It had not. She said, “I’m on my way.”

So I stood beside the machine watching car after car pull up to the machine in the other lane, evidently inserting their credit cards and moving forward when the gate lifted. Did their machine not say, “Push GREEN BUTTON for ticket?” Or did they know something I did not?

Finally the woman came and opened the machine and returned my credit card to me, saying that IT WAS MY TICKET. That when I exit I would simply insert it again and it would record my payment and let me out. Okay. I could do that. Now I was only delayed about 15 minutes, leaving me just enough time to park and get inside to my 10:45 appointment. 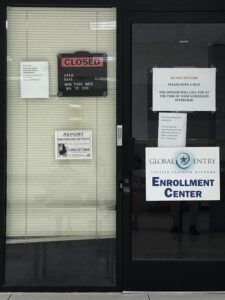 I’ve had TSA Pre-Check before, but my husband says Global Entry is better (he flies overseas a lot, or at least he used to before Covid, and we hope to fly to Italy next spring). And we are flying to Arizona to spend Christmas with one of our kids and his family. So I did all the on-line requirements a few weeks ago (including the payment) and I was here for the final step: in-person meeting to be finger-printed (yes!) and photographed. When I arrived at the door to the Global Entry office, there was a sign saying, “CLOSED.” I looked at a group of people sitting in chairs outside the door. One of them said, “The computer has been down all morning. Some of us have been waiting since 9:00 a.m.”

So I sat down and waited. Fortunately the computers came back up, and by 11:50 a.m. I was done, having only waited an hour for my appointment. Really, not much longer than a typical doctor’s office appointment, right? So I was on my way to my next adventure. 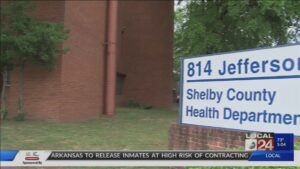 Over the weekend the CDC approved the Moderna booster shots, and the Shelby County Covid 19 website said that shots were available today for the Pfizer AND MODERNA booster at the Shelby County Health Department on Jefferson Avenue, just a few minutes from our home. The site says, “Third Doses of mRNA vaccines (Pfizer and Moderna) are now available at all Shelby County community vaccination sites.” No appointment needed. Easy, right ?

I parked right across the street and walked in, finding myself only the third person in line. An employee asked me what I was there for, and I told him, and he said he would look into it. I waited while the person at the desk dealt with the two people in front of me, and while people came in behind me needing death certificates and other such things, and were waved away to other areas. Finally it was my turn at the desk.

“I’m here for my Moderna booster,” I said, smiling at the woman behind the desk. She looked over her shoulder at another employee, who shook her head, and then said to me, “We don’t have Moderna here.”

“But, it was on the Shelby County website today saying you have it.”

“I’m sorry, but I don’t have anything to do with the website. I just know we don’t have it.” 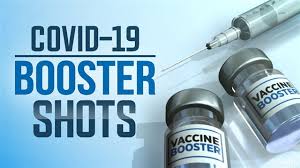 I have an appointment for Wednesday afternoon at a Walgreen’s store for the Moderna booster. AN APPOINTMENT. Although a friend told me last week that she and her husband waited two hours for their appointment for a Pfizer booster at Walgreen’s and finally left. They went to CVS, where my husband got his Pfizer booster with no waiting, and indeed, got theirs with no waiting.

Sadly, CVS does not have Moderna. A pharmacist at our regular CVS store told me that. Although this article says they do have it. (sigh) Hoping/praying my experience at Walgreen’s on Wednesday will be different, but not holding my breath.

So here’s my question:

With so many people REFUSING THE VACCINE, why is it so difficult for those of us who want it to get it?