>Today is my oldest son Jonathan’s 30th birthday. I wrote a little about dancing with my daughter, Beth, at a wedding last Sunday, but I’ve tried to leave my kids out of this blog, so as not to embarrass them. But how can I leave them out when they are so much a part of me? So today is going to be about my boys (with a nod to my daughter, who will probably end up front and center in a future post.) 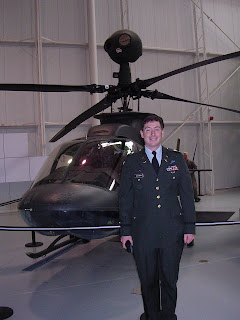 Jon flies helicopters for the Army. He did a year in Iraq (in 2003-4) as a door gunner on a blackhawk, then went to Warrant Officer School and became a pilot last November. Now he flies kiowas. (That’s one in the picture behind him.) We can’t celebrate his 30th with him because he’s finishing up some more training this week and can’t get away. Last night I got out old photo albums from 1977 (yes, he was born two weeks after Elvis died, for what that’s worth) and was brought to tears by what I saw on the first few pages from August of 1977. Pictures of nine different family members holding Jon as a baby … nine people who are no longer with us. During my oldest son’s 30 years I’ve lost both grandmothers, my father’s brother, my father, my husbands’ parents, my last remaining aunt and uncle, and my brother. Seven of those dear people died in the past 9 years, so Jon was able to know them. (I was blessed to be with three of them as they died, thanks to Hospice… but that’s a story for another day.) This day is about sons. And angels. And beaches.
Angels? Absolutely. Both of my boys (we’ll get to Jason shortly) are on a list of soldiers’ names that circulates amongst dozens of Orthodox churches. They are prayed for by name at the end of the Liturgy in many of these churches, in a special prayer written by one of our bishops. This was started in March of 2003, when the Iraq invasion began in earnest, and Jon was driving a humvee into Baghdad from Kuwait. There are stories he can tell, of a bomb crashing through the wall of the building he was sleeping in in Mosul, for example, and countless other times he was protected from harm. By these prayers? Absolutely. And angels? For real. At baptism, each Orthodox Christian is given a guardian angel to be with him throughout life. An abbess once told me that monastics get two angels. I think soldiers might get three, but I can’t verify this.
Some of those fam 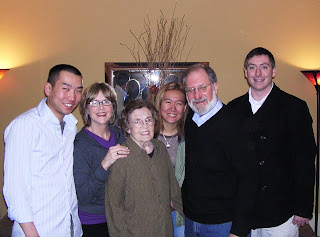 ily deaths I mentioned earlier have been times the Army has let Jon come home… once from Iraq, actually, for his grandmother’s funeral. This past February both boys and our daughter were able to be here for my brother’s funeral, (photo of all of us with my mom after the burial) as they were again in May for their grandfather’s burial at a military cemetery in Chattanooga. One of their cousins was pregnant at this last one and I thought, how appropriate–life goes on. 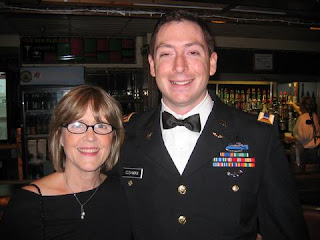 I love to celebrate things, so this past November we went to Jon’s graduation from flight school at Fort Rucker and then took him and four of his friends to the beach at Seagrove for a few days. Amazing place… I’ve been back twice since then (see photos of sunsets at Seagrove in left column of blog.) A few pix of our celeb 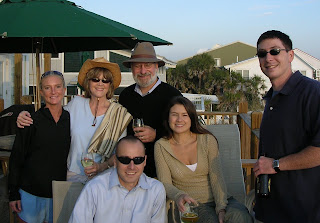 t that brings to mind another day at the beach … August 28, 2005– I had taken my mother and my daughter to Biloxi to visit my other son, Jason, at Keesler Air Force Base. We took him and his best friend, Ben, out to dinner at an amazing restaurant in an antebellum home… that was destroyed two days later. My mother watched us from the balcony of our hotel (also no lon