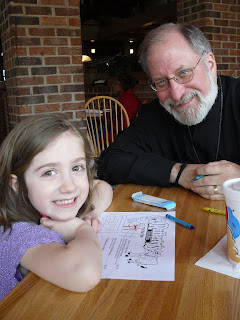 Today is our Goddaughter, Sophie’s 5th birthday. We marked the day with a big event in Sophie’s young life. Well, actually we did it yesterday. First we took Sophie to lunch at the restaurant of her choice. She chose Rafferty’s, for baby back ribs. The ribs were yummy, but the service was slow, which didn’t really matter since we were spending time with our Goddaughter. While we waited she and Father Basil played tic-tac-toe and we talked about important stuff. (Stuff too important for a blog post.)

And then we said goodbye to Father B and headed to Claire’s at Oak Court Mall. Sophie’s mom had told her she could get her ears pierced when she turned five. The big day was here. I had agreed to have mine (re)pierced with her, since I hadn’t worn earrings in about twenty five years and the holes had grown back. Here’s a cute video by two little girls who got theirs done at Claire’s. And here’s a video about how to take care of them afterwards. (Makes me glad I’m not the mother of the five-year-old at this point….)

When we got to Claire’s, we watched a little girl and her European grandmother getting their ears pierced first. Well, the grandmother was getting one of hers re-pierced, as it had grown back. She was an elegant woman. Beautifully dressed. Her American granddaughter, about eight years old, was in blue jeans and a ponytail. There was a brief discussion between the woman doing the piercing and the grandmother about legal guardianship and “rights” to have her minor granddaughter’s ears pierced, and then they proceeded without a hitch.

When they were finished, I told Sophie I’d go first and we giggled and held hands and talked about being scared. We picked out our piercing studs (the initial earrings they would place in our ears that we would wear for 10 days or until the ears healed). Sophie chose diamonds, of

course. (She’s already the Queen of Bling.) I chose white gold balls. The lady marked my ears and placed the “gun” on my left ear and pow! It was over. Only a slight twinge of pain. Sophie watched with big eyes. After finishing my other ear, it was Sophie’s turn. Suddenly she got cold feet, so I picked her up and held her in my lap as the lady pinned her hair back and marked her ears with a purple marker. But when she started crying, I said, “Sophie, this is your choice. If you don’t want to do this, you don’t have to.”
“Can we come back tomorrow?” she asked.
“No, if you don’t want to do this today, you’ll have to wait until you’re older.”
“Can we go shopping for clothes instead?”
This was tricky. I knew my answer would be pivotal. So I took a deep breath and said, “No. If you go home without your new earrings, you’ll be sad. It doesn’t hurt. Let’s just do it!”
A beautiful black woman and her teenage daughter were watching, and the mother said to Sophie, “how old are you?”
Sophie held up five fingers.
“Oh. You don’t want to be six years old and be at school and not have your ears pierced, do you?” 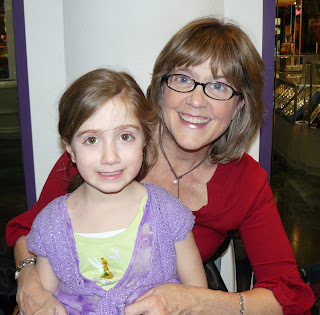 She shook her head no and then told the lady to go ahead. She proceeded with one ear. Sophie

looked surprised that it didn’t hurt. Then the other ear. Suddenly she looked up at me and a smile came across her face. She looked at the lady and said, “thank you!”

We both picked out some earrings to change into once the ten-day healing period was over. While we were waiting to pay, we watched a Hispanic family bring a baby in for her piercing. It looked like the mother, father, aunts, uncles, and older siblings were all there. Kinda’ reminded me of a baptism. The baby girl, who couldn’t have been over six months old, was held in her mother’s arms for the procedure, and let out a big cry when each ear was pierced. The family cheered and took pictures. Sophie looked at me and said, “the baby wasn’t brave, was she? Did she really want to have her ears pierced?”

I tried to explain that in some cultures this was something that was just decided by the parents. Sophie’s parents are from Syria and Iraq, and I don’t really know how young they pierce ears in those countries. But in the course of less than an hour’s time, we watched as Europeans, blacks, Hispanics, whites and middle-easterners crowded the small space at Claire’s Boutique in Memphis, Tennessee for this universal ritual. And Sophie and I left together, hand-in-hand, with big smiles on our faces. Feeling quite beautiful. 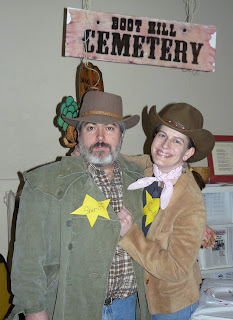 All that happened on Sunday afternoon. Now let’s back up to Friday night for a photo essay. A group of talented folks at my church, St. John Orthodox in Memphis, put on an original musical, “Orthodoxy Goes West,” for our annual dinner theater. It was a fund-raiser. We decorated the fellowship hall and tables, cooked homemade chili, donated long-necks and homemade desserts for a dessert auction at the end of the night, and everyone dressed in Western attire. 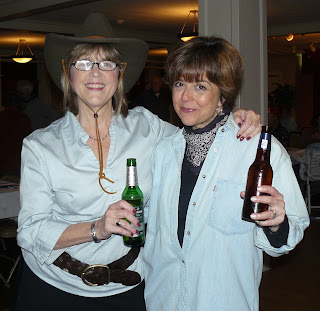 The play was based on the musical “Oklahoma.” It was about a young mouse named Barsanuphius, but his nickname was Bubba. His brother back in the old country had been the star in last year’s dinner theater production, “Don’t It Make Ya Feel Small, Y’all?” 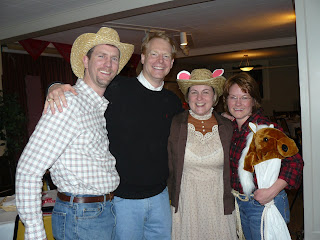 Anyway, Bubba comes into town looking for his lost faith… for a religion he could embrace. He’s introduced to Orthodoxy by the cast of characters who sing and dance their way into our hearts, and Bubba’s. The play included appearances by “cradle” Orthodox from Greek and Arab ancestry, as well as “converts” from Protestant beginnings. 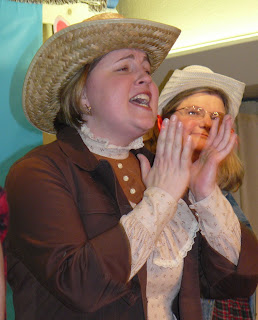 A good time was had by all, as you can see from these photos. It’s hard to tell the cast from the audience, and I’ll be adding some of these to my permanent photo collection of “hats” on the left side of my blog. 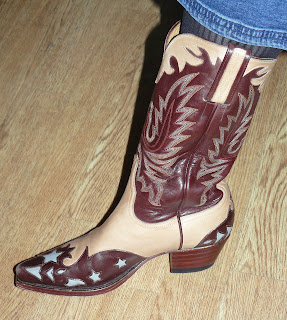 And here’s my favorite boots of the night. I could only wear one cowboy boot, since I still have my boot-cast on my (healing) left foot. But it was a start.
So… just scroll down to keep looking at pictures. And 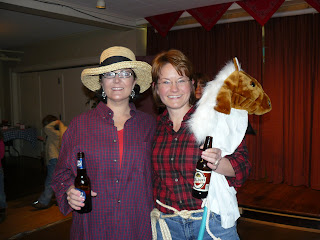 come back in a few days for a report on the Yoknapatawpha Writing Group’s monthly critique meeting… this time at Doug’s lake house just outside of Tupelo, Mississippi…. And hopefully another book review. Thanks for reading! 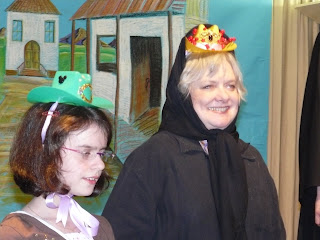 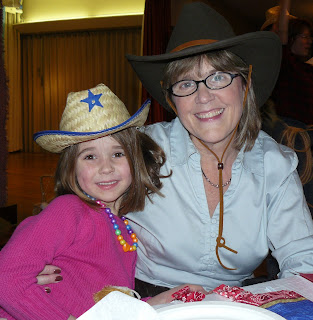 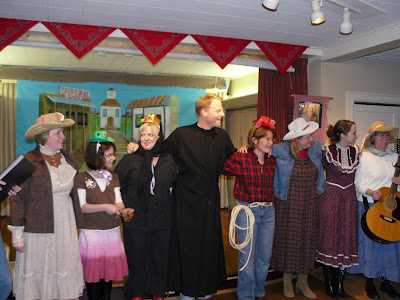 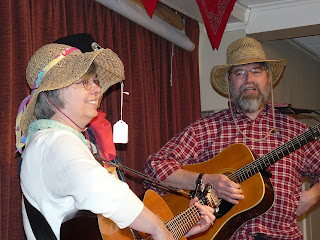 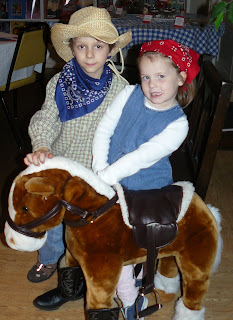 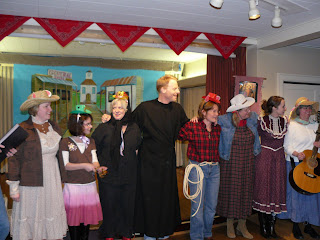 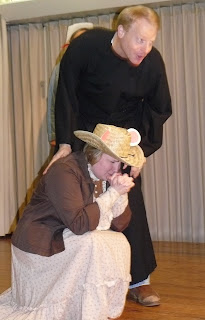 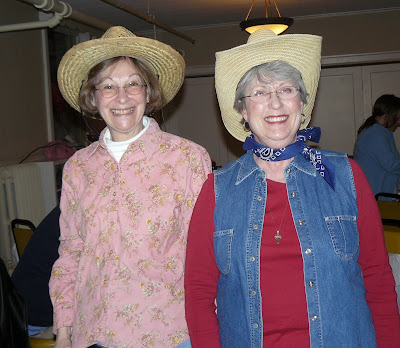