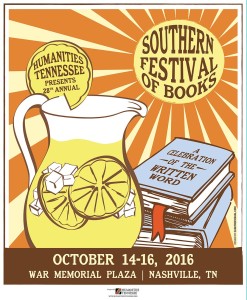 This year’s Southern Festival of Books is this weekend in Nashville, Tennessee. I have several friends serving on panels or giving readings, including J. T. Ellison, Karen Harrington, Lee Martin, Jolina Petersheim, Sally Palmer Thomason, and Shellie Tomlinson. I’m also excited that my friends Joe Formichella and Suzanne Hudson, who will also be guest presenters at a literary salon I’m hosting tomorrow night in our home here in Memphis, will be presenters there this year. 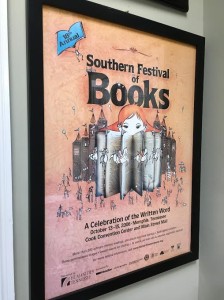 But today I’m remembering festivals past—especially the first one I ever attended, the last year the festival venue was here in Memphis, October 13-15, 2006. Ten years ago tomorrow, my life was changed forever, as I met a number of authors who would become friends and mentors, including Lee Smith, Cassandra King, Jennifer Horne, Wendy Reed, and Beth Ann Fennelly. I wrote about this event in my essay, “Chiaroscuro: Shimmer and Shadow,” which was published in Circling Faith: Southern Women on Spirituality (University of Alabama Press 2012) edited by Jennifer Horne and Wendy Reed. Here’s an excerpt:

In October of 2006 I attended the Southern Festival of Books at the Cook Convention Center, just a few minutes from my home in midtown Memphis. The program boasted a few of my favorite authors, especially Cassandra King, whose book, The Sunday Wife, had begun to soften the hard layers with which I had adorned my public persona. Meeting Cassandra, sharing my story with her, and having her write in my copy of her book, “To Susan, who knows what a Sunday wife is,” were defining moments for me. I loved her even more after I read her essay, “The Making of a Preacher’s Wife,” in the first volume of All Out of Faith: Southern Women on Spirituality. She described her struggle—“balancing a Southern Belle, good-little-girl persona with that of an artsy wannabe who smoked cigarettes and dreamed of being a writer.” And she wrote candidly about her years as a minister’s wife, during which she “wrote devotionals and religious poems and church pageants, not out of devotion or true piety, but to please and impress others.” Finally she “went underground” and wrote a novel about a preacher’s wife who questions her life on many levels, stating that “the writing of it was my salvation.”

As I listened to Cassandra and the other women on the panel for All Out of Faith, my heart was beating so loudly in my chest that I was afraid everyone in the room could hear it. On the inside flap of the book’s cover, I read these words: “The South is often considered patriarchal, but as these writers show, Southern culture has always reserved a special place for strong women of passion.” That’s me, I thought. And in the Afterword the book’s editors, Jennifer Horne and Wendy Reed, wrote about how “spirituality is not removed from ordinary life but infuses it,” and about the need to “go inside myself, below the roles I’d taken on as layers.” Yes.

During the festival I also met Lee Smith, who was reading from her latest work, On Agate Hill, and the poet Beth Ann Fennelly, who paints a vivid picture of her own take on womanhood and spirituality in her poetry. She was reading from her latest book of poems, Tender Hooks. My favorite poem in that book is “Waiting For the Heart to Moderate,” in which she describes what it feels like to be “all edges, on tender hooks” at every stage of a woman’s life, and to still feel the music “booming in her breastbone.” I’m much older than Beth Ann, but I still hear that music, and like her, in my own efforts “to free it,” I also worry that I “might do something stupid.” But maybe my middle-aged heart is finally learning to moderate.

As the festival ended, I found myself thinking, where have these women been all my life? I hurried home with my autographed treasures and poured myself into the strong but tender female wisdom between the pages of their works. I rediscovered Sue Monk Kidd’s writing, especially The Dance of the Dissident Daughter. And while my Orthodox embrace of the Mother of God differs from Kidd’s approach to the “feminine imagery of the Divine,” I benefited greatly from her wisdom concerning Favored Daughters who “carry the wound of feminine inferiority,” trying to make up for it by setting “perfectionist standards . . . a thin body, happy children, an impressive speech, and a perfectly written article.”

Or maybe a perfectly crafted book. Three short months after my encounter with these strong women of faith, I completed a novel…. My current novel-in-progress features three strong women of passion as its protagonists. I don’t know if the writing of it will be my salvation, but it is, at a minimum, an effort towards wholeness.

As the late Madeleine L’Engle said: “Until we have been healed, we do not know what wholeness is: the discipline of creation, be it to paint, compose or write, is an effort towards wholeness. . . . The important thing is to remember that our gift, no matter what the size, is indeed something given us and which we must humbly serve, and in serving, learn more wholeness, be offered wondrous newness.”

Learning to serve the gift through writing and painting is bringing wondrous newness into my life every day. Once it surfaced in an essay about how anger blocked me from painting icons, and how the beach, a dream, and a soft-rock song helped me get unblocked. At other times that newness has shown up to cheer me on as I embrace the darker aspects of my Mississippi childhood by laying down difficult chapters of my novel-in-progress. Sometimes I feel its presence during the sacrament of confession, when I’ve been up all night facing down my demons as I write, often chasing them with vodka or wine. Maybe my brokenness, like the egg yolks that I use to make tempera paint for my icons—themselves a form of life interrupted—is part of my offering to God. 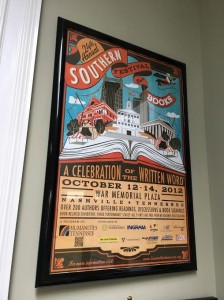 As I read those words and remember that festival from ten years ago this week, I am so thankful for the amazing friends I have found in my writing life. And for the folks who work hard to put on these literary festivals like the Southern Festival of Books. I returned to the festival in 2012 (when it was back in Nashville) to serve on a panel for Circling Faith. These event posters adorn a wall in my office, reminding me of the importance of gathering with fellow writers and readers to celebrate the written word. I’m hoping to participate in several of these in 2017 as I give birth to my first books. Stay tuned as the journey continues.