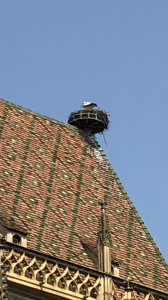 On the 6th day of our Viking River Cruise we crossed the Rhine and spent a morning in France, touring the beautiful town of Strasbourg. There are many things to love about this historic town, but my mind was on babies when we visited. Or really, just one baby. We have friends who are in the process of adopting a little girl, and while we were in Strasbourg we learned about the storks that come there and build nests every year—like this one on top of the Strasbourg Cathedral de Notre Dame. Inside the Cathedral, I prayed for this child and the family she would become part of. And I loved all the stork-related art all over town. 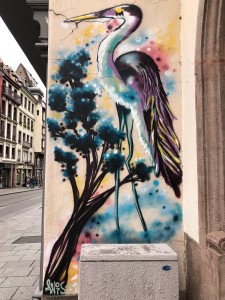 So WHY do the storks come to this area of Alsace every year? The geography of Alsace—in the plain of the Rhine with abundant marshland (at least before the canalisation of the Rhine after the second world war) made it a good feeding ground for storks. The area was also within reach of their winter migration areas in North Africa. North Africa! Can you imagine that they fly that far every year? 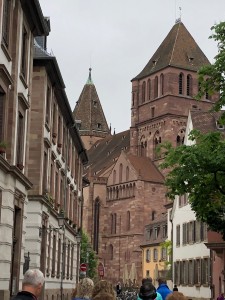 But back to the cathedral. The first version of the church was begun in 1015, but fire destroyed most of the original Romanesque building. By the time that cathedral was being renovated (at the end of the 12th century, this time with red stones carried from the nearby mountains of Vosges), the gothic architectural style has reached Alsace and the future cathedral was starting to develop all characteristics of gothic aesthetics.

There is much to admire inside. I love these reflections by Victor Hugo:

“The church portals are beautiful, particularly the Roman portal; there are truly superb figures on horseback, the rose-window is noble and well-cut, the entire front of the church is a clever poem. But the true triumph of this Cathedral is the spire. It is a veritable tiara of stone with its crown and its cross. It is a gigantic and delicate marvel.” 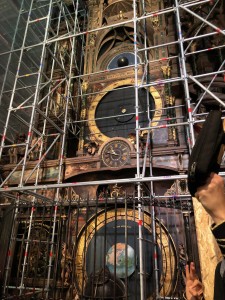 One of the most fascinating features of the church is the astronomical clock. A principal work of the Renaissance, this mechanical astronomical clock is an invention put together by various artists, mathematicians and technicians. Swiss watchmakers, sculptors, painters and creators of automatons all worked together to build this amazing automate. The present mechanism dates from 1842 and is especially attractive for the work of its automatons, which, every day at 12.30 pm, all start their show. We were fortunate to be there for one of its movements. It was too tall to capture in a video, but I got a few stills. 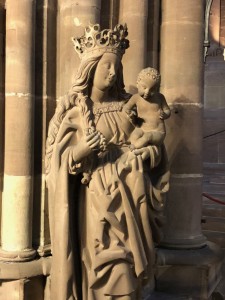 The astronomical clock offers you a view of the different stages of life, which are personified by a child, a teenager, an adult and an old man, who pass before Death. Above this are the apostles who walk before Christ. Their passage is punctuated by the beatings of wings and the song of a large rooster. In front of the clock is the marvelous Pillar of Angels, which, in a very original manner, represents the Last Judgment. 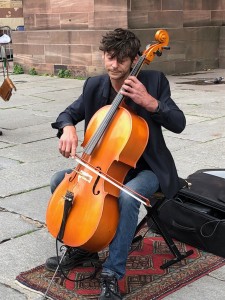 After touring the cathedral and walking around the cobblestone streets window-shopping (we didn’t really have time for real shopping) we enjoyed gelato at an outdoor café right in front of the cathedral. And an impromptu cello concert. Another magical day. 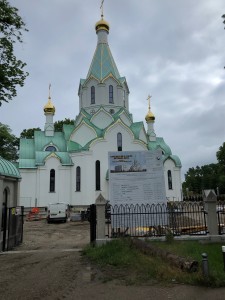 Oh, and I had read that All Saints Russian Orthodox Church was being built in Strasbourg, and we drove past it on our tour bus but it wasn’t close enough for us to walk back to see it close up later. Here’s the shot I snapped through the bus window. Stay tuned for our next day’s excursion to the medieval village of Colmar, our final destination before arriving in Basel to fly home. Thanks for joining me!

(I’ll close with a few more photos in Strasbourg.) 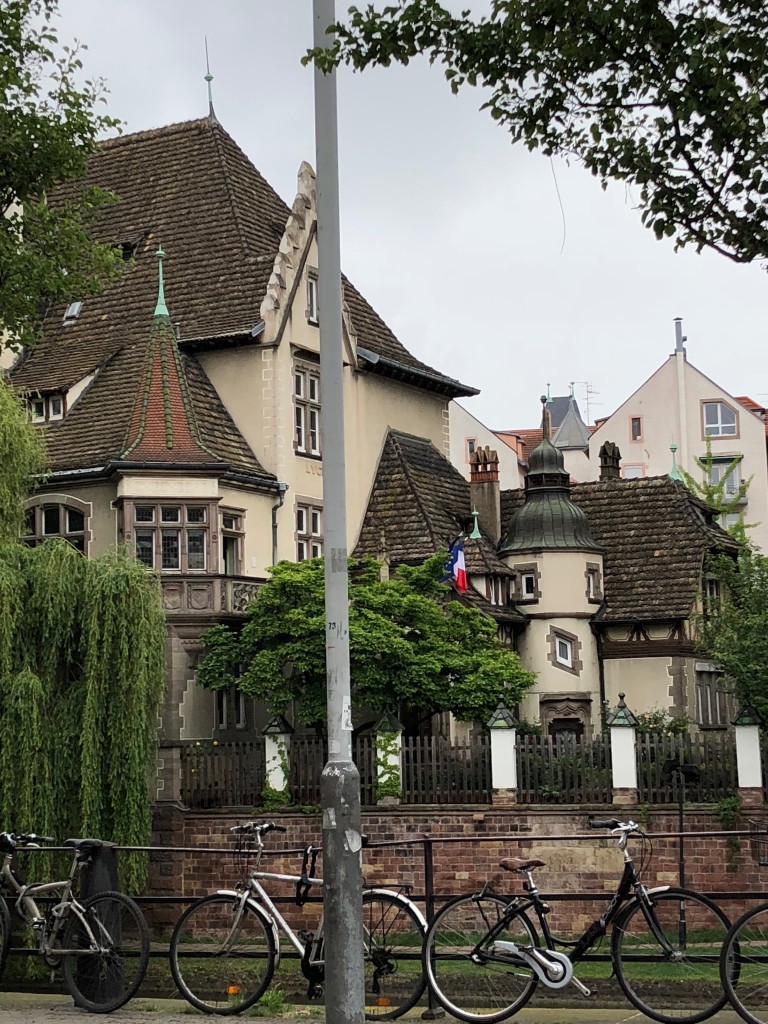 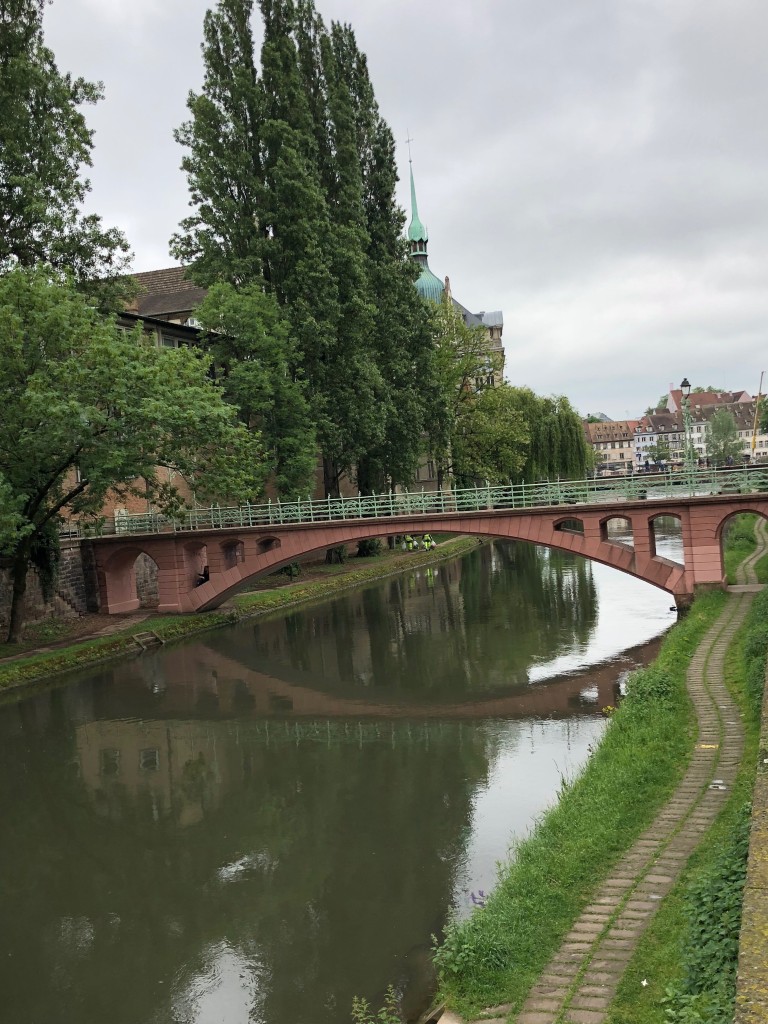 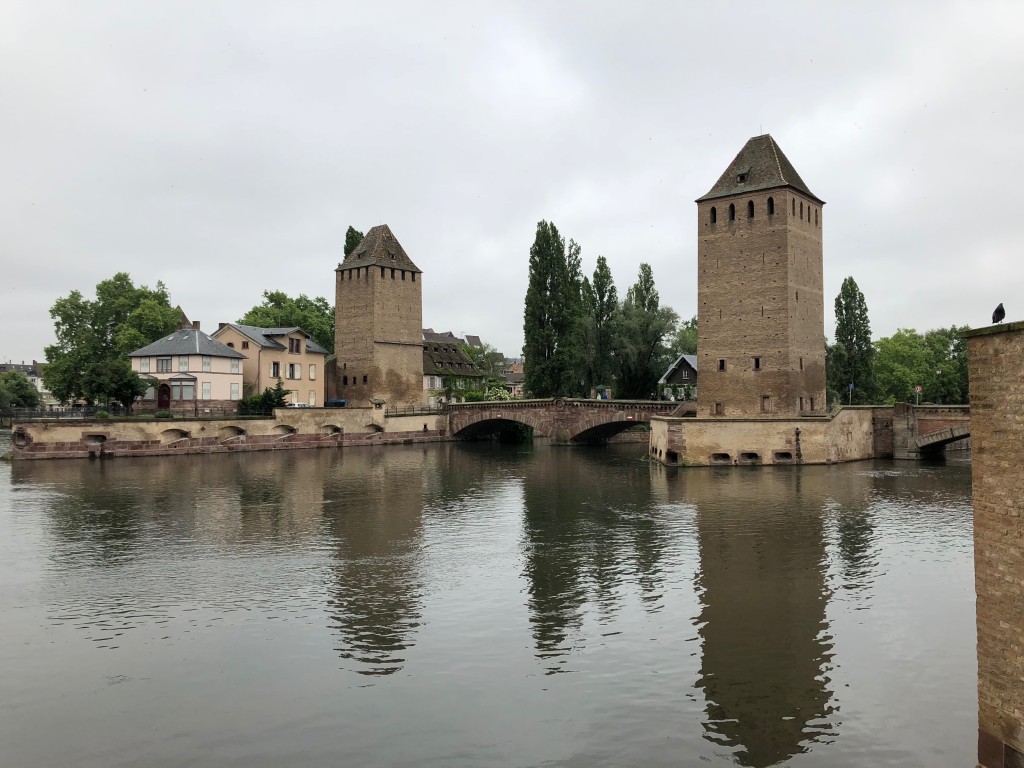 1 thought on “Storks and Clocks in Strasbourg”