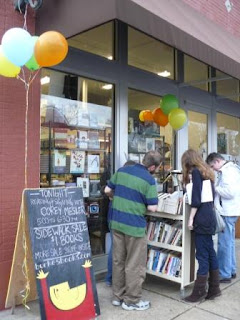 Memphis. Over $200 worth of books for Christmas gifts. And yes, I could have saved some money by ordering on Amazon or other online sites, but then I thought, “what have they done for me lately?” Or rather, for the writers who enhance our lives with their art?

It was delightful to stop in at Burke’s and visit with owner, Cheryl Mesler and remember delightful evenings with writers reading and signing their books at Burke’s. I think the first reading I attended at Burke’s was John Grisham signing The Firm back when Burke’s was on Poplar and under different ownership. I actually did an interview with Grisham following the signing, for a literary magazine in Oxford. But more recent memories are of Beth Ann Fennelly’s reading from her poetry book, Unmentionables, this past summer. But I also remember how Cheryl, her husband 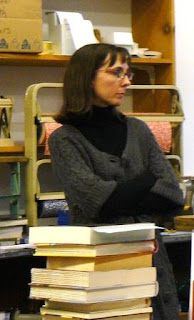 and co-owner Cory, and the other staff always help you find what you need. Last year I walked into Burke’s and just described one of my children’s tastes in books and she led me to authors I didn’t know and books that he would love. It reminded me of that scene in “You’ve Got Mail” where Meg Ryan’s character, the small bookstore owner, walks into the big mega-store and overhears a customer asking one of the clerks about a certain well-known author and he had never heard of her.

So, yesterday I asked Cheryl (left) how business was going this Christmas season and she shrugged her shoulders and said, “oh, it’s slow, but it’s slow everywhere.” I was thinking about how everyone has to decide where to cut back. And again how important art is to our culture. I’m doing my part as a consumer, buying hardbacks whenever I can. A friend and fellow writer once told me that she always tries to buy hardbacks from living authors because they need the money. For dead writers, she goes to the library. Not a bad plan.

There’s a short little piece by Roy Blount, Jr. at Square Book’s website called “Buy From Your Local Bookstore Now,” that says it better than I can.

So, today I’d like to encourage everyone to stop by their local independent bookstore and browse and visit with staff members and buy gifts for family and friends. Even for folks who aren’t big readers—they need it most! I know lots of my readers live all over the country, but I’m just going to list the booksellers I know personally in the Southeast: (click on the names to link to their websites for directions to each store)

Burke’s Books in Memphis, Tennessee.
Square Books in Oxford, Mississippi. I’ve got lots of posts that involve Square Books, but here’s one about Camp Square Books, this past July. 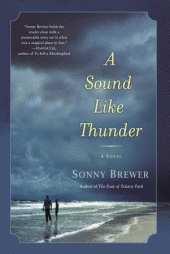 for a writer, and one of my recent feasts has been A Sound Like Thunder by Sonny Brewer. Having met Sonny at Southern Writers Reading in Fairhope in November, I was anxious to get into his books, and I started with this one. It’s a jewel… literary writing that doesn’t bog you down with too many pages of descriptions of trees (I’ve got a touch of ADD) and keeps you turning the pages, wanting more. But also pausing and re-reading a sentence, or even a paragraph, every now and then, just for the sheer beauty of how the words sound. Sometimes I read them aloud, like this sentence, describing an extraordinary sunset:

“I knew better now than then that not even a magician with words or paints or music could handle the picture in the sky when God is feeling frisky, showing off, baking for his mortal children the daily bread of the eye.”

And this section, where Sonny is describing, through the eyes of the teenage protagonist, Rove McNee, the process of healing the loss of his complicated father:

“My hope of relief lay at the eye of this thing, and seeking work among men who had known him would put me in the middle of the hurt. And the hurt had surprised me, springing unexpected from my psyche like a determined tendril from a scuppernong vine, curling towards the light, a brightness issuing from forgiveness. It’s easier to reconcile a bad story if you know the sense behind its first line.” 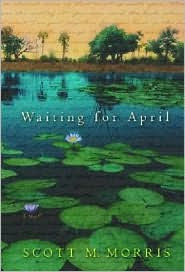 A young writer, Scott Morris, captured my senses with his first, and also very literary, novel, Waiting for April. Here are a few amazing metaphors and phrases:

“My little experiences with her when I was growing up, the sort that most people would discount as mere child’s play or fancy, were for me the wet clay of my slowly setting world.”

And since I love sunsets, I’m always taken with the endless ways gifted authors have of describing them:

“The sunsets, especially in the warmer months, were thick as fruitcake, dripping like caramel, a swarming canvas of buzzing colors. An expert would point to the great humidity visited upon that part of the country, how the light refracts again and again through pale planets of water that catch flame and turn into a billion tiny palpable prisms, but I say it is nothing less than the exalted exhalations of angels.”

And here’s one more paragraph, describing young Roy Collier’s search for the truth about his father:

“The convolutions and confrontations. The constant zigging and zagging between peace and paranoia. The relentless reverberations from missing facts and well-kept secrets. The ghosts, goblins and lore. The endless stories and the endless stories within those endless stories. With a mere flick of my wrist I could set that glowing globe spinning in Mother’s darkened library and the entire world repeated itself to me over and over again.”

I read these brilliant writers not only to feed my art-hungry soul, but also hopefully to learn 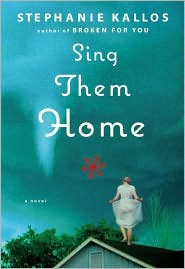 from their finely tuned craft. To be a better writer. When I was picking up my Christmas gifts at Burke’s yesterday, I also picked up a book for myself, so if my blog had a “Susan’s Bookshelf” section, this would be on top. I started reading it last night. It’s Sing Them Home by Stephanie Kallos. I loved Kallos’ book, Broken For You, so I was eager for her latest work.

So, whether you’re a writer or a reader or both, or even if you only have a slight sense of the importance of literary art to our lives, give the gift of literary to someone this Christmas. Or to yourself. And buy it from your local independent bookseller. Can’t find one? Look here.