>Day 1 in San Francisco (Wednesday, May 6)… I awoke to fog (imagine that) and then I 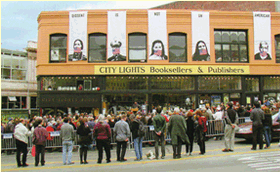 read my friend Doug’s latest short story, “Fog,” (which he wrote for Barry Hannah’s fiction class at Ole Miss) and that really got me in the mood…. so I headed out on foot for City Lights Bookstore, a 30-minute walk from our hotel, since it’s goes straight through Chinatown and I couldn’t resist a couple of bargains on the way. See, I bought this awesome silk/wool blend scarf-wrap thing in the Minneapolis airport yesterday, but then I left it on the plane when we landed in San Francisco (long story about trying to retrieve it, but I won’t bore you) so I needed another one, for my short-sleeved dresses for these chilly SF nights. 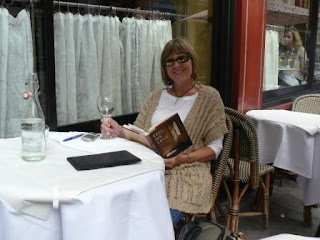 Before I hit City Lights, I read one of the craft articles on the latest Brevity Magazine online, “Balancing Music and Meaning” about short nonfiction. Here’s my favorite thing that Kim Barnes said in the interview:

At City Lights I bought this amazing book, Tell Me True: Memoir, History, and Writing a Life, edited by Patricia Hampl and Elaine Tyler May.

Later I found this wonderful little French café on the edge of Chinatown as I was walking back to the hotel and I sat outside having delicious French wine—Savignon Blanc, Domaine du Tremblay, Quincy, doire Valley France, 2007, and I started reading the first essay in the book. But in the introduction, the editors blew me away. On the one hand, Patricia Hampl, a published memoirist herself, says:

The memoir has been, on the one hand, a startling success story in American publishing in the past quarter century. But, it has also been literature’s changeling, the bad apple, ever suspect, slightly illegitimate brassy parvenue talking too much about itself.

She calls the memoir “literature’s changeling” at one point, but later she says that “memoir has become the signature literary genre of the age.” Her co-editor, Elaine Tyler May, has authored several books on twentieth-century American history. So, it’s to the intersection of history and memoir that these two writers have brought us—and the fourteen contributing memoirists in the book—in order to teach us about the essential work of interpretation and imagination—which is done in that uncomfortable grey area where memoir intersects with history.

I sat and read the first essay in the book, “The Lion and the Lamb or The Facts and the Truth: Memoir as Bridge,” by Fenton Johnson (author of Geography of the Heart) and his words reminded me of the Q&A with Kim Barnes from earlier:

The cultivation of memory—most frequently through music and orally recited poetry—was an essential component of these preliterate cultures…. and later, A successful memoir is not a product of the self-obsession of a selfish, me-first generation; it is evidence of literate people’s recognition that the written word has replaced the story told by the winter fire as our means of establishing and preserving cultural memory.

Yes, memoirists, at their best, are story-tellers, but they tell their stories “true” rather than imagining the characters and plot. Cheri Register, another contributor to the memoir anthology, says:

“In the 1990s, as memoirs like Mary Karr’s The Liar’s Club and Frank McCourt’s Angela’s Ashes began to compete with novels in popularity, a few literary critics grew alarmed. James Wolcott warned in Vanity Fair that literature might devolve into ‘a big earnest blob of me-first sensibility.’”

So, how do those of us writing memoir prevent that from happening? Register offers at least one precaution:

Ah, there’s the rub… if you write your stories true, and place them in recognizable 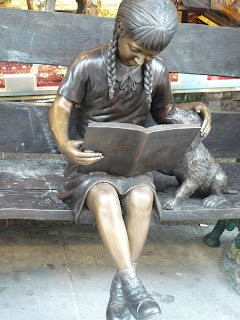 places, everything will be on the table. There are many personal and ethical privacy issues to sort out before taking this step. But once those are resolved, the real work begins—the work of writing personal truth with passion and literary style while holding onto that all important sense of place. I’ll get back to it soon…. but not today. 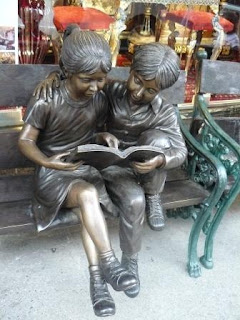 Today (Day 2 in San Francisco) I’m writing this blog post from the Starbucks inside the Marriott where we are staying, and then going to the Museum of Modern Art, and maybe down to Fisherman’s Wharf while the sun is shining! Oh, I almost forgot to share these two photos of these wonderful stautes of “readers” that I found along Chinatown. I would love to have them in my back yard! 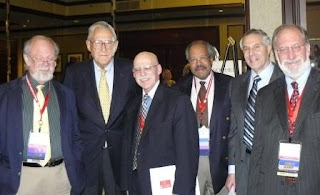 time friend of my husband. Marvin was founder and Editor-in-Chief of the Journal of Clinical Hypertension for the past eight years, and is now retiring. Here’s an interview with Marvin, along with Billie Jean King, that I found on You-Tube. Not something you might find in the official ASH literature, but a fun way to see Marvin in action. (It’s my job to inject some color into my reportage of these scientific doings, you know!)
That’s Marvin, second from left, surrounded by a group of admiring ASH members just before the reception last night. (My husband, Dr.William C.Cushman, is on the right.)

So today while these scientists are doing their work, I’ll be enjoying more of this beautiful city. Check back tomorrow… or maybe Saturday… for more photos and musings. I’m going to the Contemporary Jewish Museum tomorrow to see a Marc Chagall exhiit. We’re getting together with a couple of my husband’s first cousins (he has six!) who live in the Bay area on Saturday afternoon and evening, so that should be fun. Until then, read a good memoir! (Oh, remember the books “on my shelf” from my last post? I ended up reading Bound South on the plane here and it’s really a good read.)