>Happy Valentine’s Day! Whether you’re a sucker for Hallmark or a critic of the day’s cheesy-ness, let’s meet in the middle and just have fun with it.

Like these make-your-own-candy-e-hearts that I just discovered. I’m sure there’s a way to order the real thing (like the personalized

M&M’s I discovered last Easter) but it’s too late for that, so here are a few I would have made and sent to family and friends if I had thought of it earlier. (I’m sure my daughter is thinking, “But Mom, I can’t eat the e-Puffs!” and I’m thinking “It’s the thought that counts, right?”)

The black one for Oreo (my black and white cat) is supposed to look like a Necro wafer. Yum, can’t you just taste it? (Lots of imagination is called for here.) 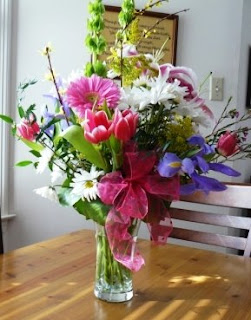 And what about my man? He went to Rachel’s! (In these depressed economic times, it’s a bargain over Jared’s, and I love flowers, and these are gorgeous!) 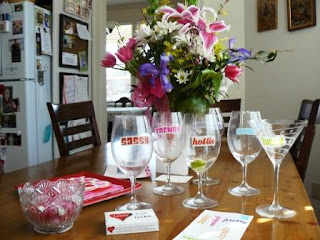 Last night a few girlfriends joined me for a little Valentine’s Eve get together, and how cool are these wine glass labels that one of the girls brought? 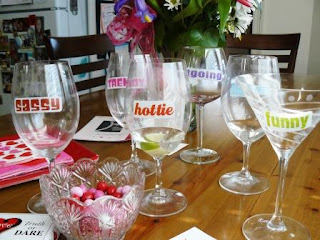 this morning when I’m loading the dishwasher and the glasses have the remains of Cosmos and Salty Dogs in them, but hey—you get the picture. And the cream puffs dipped in hot fudge sauce would have made a pretty picture, but, well, too late now. (oink oink!) 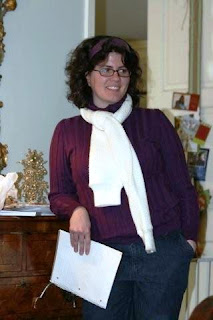 My Valentine’s Day gifts to you, my readers, are two pieces of prose—one published and one that didn’t make the cut. And the winner is….my writing buddy (and Ole Miss journalism student) Michelle Bright, (left) columnist for The Daily Mississippian, with her point-on review of the movie, “He’s Just Not That Into You.” You can read Michelle’s column here. Way to go, Michelle! And I’m dying for some of your grandma’s fried chicken!

And now for your free essay. Along with 650 others from around the world I entered Writer’s Digest’s Valentine’s Day contest (“Red Heart: Black Heart”) and didn’t win. Didn’t even make it to the finals. The category I entered was “Essay: Love at First Sight.” 750 word maximum. The winner wasn’t posted as of 11 a.m. today, and the voting is over, but by the time you click on the link, maybe the winner will be announced. But if not, you can enjoy reading the finalists.

But now, I hope you enjoy my essay… with your chocolate. Or flowers. Or Puffs.

It felt like I had been waiting my whole life for this moment, although I was only twenty-six years old. Oh, sure, I had several cases of puppy love when I was young, and quite a few serious adolescent crushes, including one my junior year in high school which actually resulted in marriage two years later. But I wouldn’t say that any of those relationships had begun with love at first sight.

My first crush took some time to evolve. I had known Buster for several years before my interest in his motorized go-cart morphed into curiosity about kissing. And when the first kiss finally arrived—in fifth grade—it couldn’t hold up to the rush of speeding down Hillview Drive with the wind blowing in my hair and the smell of gasoline feeding my ten-year-old thrill-seeking hunger.

Gary came closer to winning my heart in eighth grade, with his disarming good looks and mysterious past. Gary’s family had moved to my hometown in Mississippi, so his status as an outsider added to his mystique. But again, it was never a case of instant infatuation.

My tenth grade romance almost fit the cliché. I met Allen on a bus ride to my first high school football game. Stolen glances turned into introductions and awkward smiles, and when he sat by me on the ride back to school after the game, there were definitely new awakenings in parts of my body that were struggling to make that life-changing transition from girl to woman.

When I met Bill half way through my junior year of high school, he was a sophomore in college. He slayed me with his baby blue eyes, cleft chin and sexy baritone voice. His precursors had all been boys. This was a (nearly)grown man, sweeping me off my feet on our first date—on a sailboat—serenading me with Herb Alpert’s latest hit, “This Guy’s in Love.” But could I know true love when I was only seventeen?

Fast forward nine years to 1977. I was twenty-six years old and in mourning over Elvis’ death in August when the long-awaited phone call came. “Can you be here tomorrow afternoon at 3 p.m.?”

“Tomorrow?—oh, of course!” I stayed up all night, preparing to meet the man of my dreams. After changing clothes three times and fussing over my hair and makeup ’til the last minute, I was finally as ready as I would ever be.

It was only a ten-minute drive, and my heart was pounding as I walked through the front door and into the parlor where Jonathan was waiting for me. I approached him slowly, holding back the rush to embrace. Finally our eyes met, and I completely lost myself in that first look. And then I held him. So this is what love at first sight feels like—like nothing else matters but the connection of two hearts beating as one. When we kissed, it was as if no one else was in the room, or anywhere on Earth, for that matter. But after a few minutes, our pas de deux was interrupted by my husband’s voice: “Can I hold him?”

I reluctantly handed the two-week-old baby boy to my husband of seven years, and turned to exchange a hug with our social worker. She had worked with us for five long years, and now the formal adoption placement was complete. After a little more paperwork, we would be taking our son home with us.

It’s been thirty-one years since the day I fell in love with Jon. My husband and I eventually

adopted two more children, but with each of them, we received photographs from orphanages in Korea and had time to bond gradually with their images during the months of waiting for them to arrive. With Jonathan, there was no photograph, no prelude to our first embrace. Love at first sight? Absolutely. But I think it was the kiss that closed the deal.