>It’s Friday. Like Casual Friday. Or Open Line Friday. Or I Don’t Want To Spend All My Creative Juices Writing A Blog Post Friday. (I’m saving them for real work today… crafting an essay to submit to a writing conference.) But let not your hearts be troubled, ‘cause I’ve got some treats for you. (Just a little of this and a little of that, so don’t bother watching for a thread here.)

First of all, do you know about TinyURL? It’s amazing…. in two seconds it turns a long URL into a tiny one that doesn’t take up so much space on your Twitter blips or anywhere else. Just go to the website and do what they say. Seriously, only takes two seconds.

Second goodie: (well two-in-one!) Check out Michael Hyatt’s video/demo of the new Kindle 2. I tweeted Michael (on Twitter) to ask if the font on the Kindle 2 was large enough to see while working out on an elliptical machine, and in my tweet I wanted to show my hesitancy to do the whole e-book thing, so I said, “I’m interested, but I really like real books, made out of paper.” His reply? “And I still like candles.” Touche’, Michael! Also check out his blog post today about Gmail.

Third goodie: Watch a preview for my favorite show, the new “Saving Grace” episode, which airs at 9 pm. Monday night, March 2, on TNT.
Fourth goodie: Two new “friends” through blogging: I had coffee with Sandi Hughes this morning. We had never met, but Sandi had been following my blog for a while and finally decided to email me. Turns out the IT and Medical Staffing business she and her husband own is right here in midtown, a few blocks from where I live. And from High Pointe Coffee. We had a blast getting acquainted. She and some of her friends are going down to Jackson (Mississippi) for the Sweet Potato Queens festival during the St. Paddy’s Day weekend. Oh, my. And you know, in person Sandi doesn’t seem like the type to be dressed up in tights and green boas prancing down Capital street during a parade. But hey, I only met her today. Check out Sandi’s blog. (I have to say I’m teasing Sandi here… she’s totally NOT the type to dress up and dance in the parade!) And I’m sending a shout out to Tim Elhajj, a writer in the Pacific Northwest who found me through a post on Brevity’s blog. Tim is also working on a memoir, but has been published in the New York Times, Brevity and other places. He has a great blog himself, Present Tense.

Fifth goodie: a friend put me onto Pandora internet radio . So I’m putting this post together

listening to Gillian Welch singing “Elvis Presley Blues.” Nice. Oh, and “When the Angels Call My Name.” Love that one. Peaceful. And “Throw Me a Rope” by KT Tunstall. And “Peace of Mind” by Mindy Smith. And “Jackson” (about Jackson, Missisippi!) by Lucinda Williams. Good stuff.

BREAKING NEWS: As I was about to post, around 6:45 pm., I heard sirens and 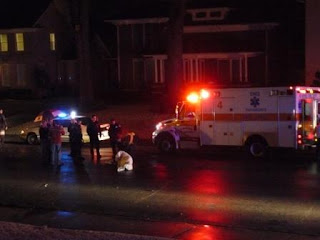 looked out my front windows and there was a man lying in the street with people standing around him. I saw a shopping cart, broken in pieces, and also sheets of glass lying around. I called out to the people surrounding the man, “Does he need a blanket or anything?”
A A man standing near the victim answered, “No thanks, by the time you get out here with a blanket the ambulence will be here.” 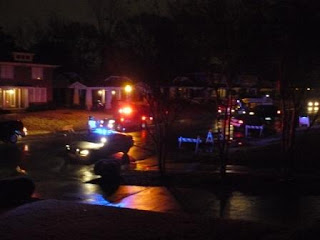 I went back inside and waited. 5 minutes later I looked and the ambulence still wasn’t there, so I ran outside with a blanket and pillow. I covered the man with a blanket, and he thanked me, and lifted his head for me to put a pillow under it on the cold, wet pavement. He was lying on his side, not moving. It was raining, and the temperature was dropping. I asked if he needed anything else, but before he could answer, one of the men standing nearby said, “here comes the ambulence now.” So I went back up on my porch and watched as the EMT guys assessed the situation and loaded him onto the ambulence.
I went back down my driveway into the street and picked up the blanket and pillow and came back inside to watch from my front windows. A tow truck arrived, but I didn’t see a car that needed towing. 3-4 police cars were on the scene, with cops hopping out of cars and talking to eachother and the 5-6 people standing around the place the man had been lying. He must not be critical, because the ambulence sat there for about 20 minutes before leaving the scene. Two police cars with blue lights flashing stayed on the scene for a few more minutes, and by 7:30, everyone was gone. And the broken shopping cart has been taken away. I can’t help but wonder if he was homeless. I stood in my dining room, where my icons are, saying prayers for this man who was struck down by a car in front of my house on this Friday night. Lord have mercy.

And finally, I decided to go through the 253 posts I’ve put on Pen and Palette since it’s inception in August of 2007 and choose my favorites. Later I’ll put links to them on my blog site permanently… over there… on the left. But that might take a while (I’m really really not a techy) so for now you can just click on any of them that interest you, right here. (Below) I’ve put some of them in groups, by topics. Others are random. Have a great weekend, everyone!

Dashing Our Thoughts Against the Presence of God February 2009
The Lenten Triodion and Prelude to Spring February 2009
The Angels Vs. the Shadow Government January 2009
Shepherds are Playing December 2008
Fashion and the Inner Life October 2008
Windows to Heaven: St John VBS July 2008
Keeping the Reader Safe June 2008
The Holy Spirit Day June 2008
Wet Jesus and a Strange Mix of Art and Iconography June 2008
The End of Art? May 2008
Triple Threat or Hat Trick? May 2008
Behold Your Mother May 2008
Christ is Risen! April 2008
Holy Saturday April 2008
Holy Friday April 2008
Dying Eggs on Holy Thursday April 2008
Angels of the Lord, Finished! March 2008
Gabriel’s Day March 2008
Forgiveness Sunday and Kites on Clean Monday March 2008
More Windows to Heaven February 2008
Holy Water January 2008
Icons Will Save the World December 2007
What is this Great and Strange Wonder? December 2007
The Books of the Illiterate December 2007
Beginning to Pray November 2007
Feasts, Four-Year-Olds and Forefathers November 2007
Patmos, Island of the Apostle of Love October 2007
Farewell to Athens, Discovoring Leros October 2007
More Random Acts of Filoxenia October 2007
Dwarfs on the Shoulders of Giants September 2007
Beauty Will Save the World August 2007