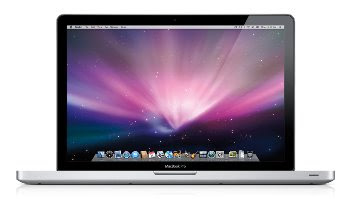 switch for lots of folks. Not such a big deal for others. But it’s also our 39th wedding anniversary, which is a big deal any way you look at it! So, what am I doing to celebrate? Well, today I’m going shopping for a Mac Book Pro, so I’ll be making a big switch of my own. This will, hopefully, be my last blog post on a PC. 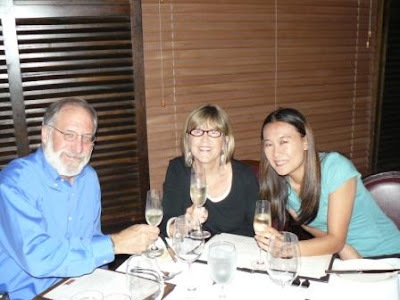 Now that may not sound very romantic to some folks, but I’ve been wanting a Mac for years. Our daughter is home from grad school this summer, and she uses a Mac, so she’s going with me to the Apple Store. Last night we took her with us to Ruth Chris Steak House for our anniversary eve dinner. Oh, and you can read about last year’s anniversary celebration and see photos here, including old photos from our wedding and honeymoon!. 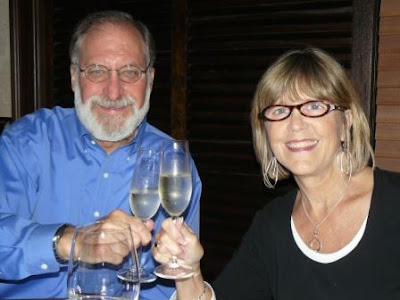 We toasted with champagne before our delicoius steaks and sides arrived. And yes, we finished off with creme brulee, ice cream, and for me, a frozen Brandy Alexander. Cushmans know how to celebrate! 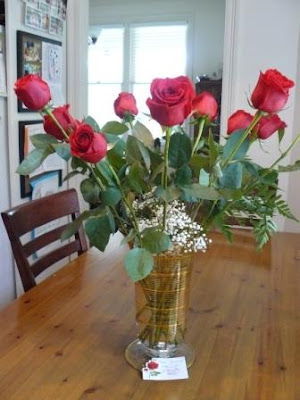 Earlier in the day I arrived home from errands to find these gorgeous red roses on the kitchen table from my husband. They’re in the vase that was given to us by Urania Allisandratos before she died a couple of years ago. She said that her husband, Andy, had given her the vase on their first wedding anniversary (and they had 59 anniversaries) and had brought her flowers for it every year after. She pretty much told my husband that he had big shoes to fill. Aren’t they beautiful? 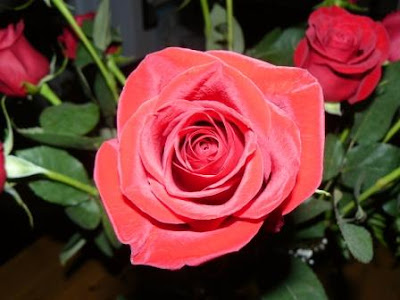 It was fun to play around with close-ups of the blooms. 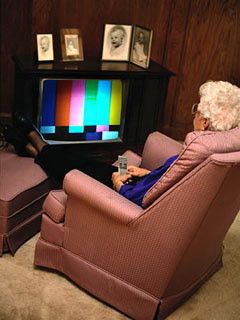 Hope it will be as much fun to play around with my new Mac Book Pro. I was reading an article in AARP the Magazine, which was trying to help seniors get ready for the Big Switch to digital television. It reminded me how much harder it is for my brain to adjust to new things as I get older. Suddenly I worried about whether or not my mother’s television at her nursing home was “ready,” and then I remembered she’s got cable. 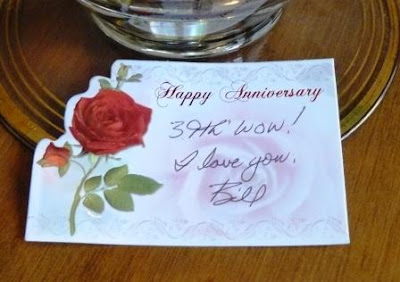 So, I’m off to the Apple Store! Hope I’ll be functioning on my new Mac Book Pro in time for another post by Monday. In the meanwhile, I’m going to try to bask in the joy of today, my 39th wedding anniversary. Wow. And another countdown begins: 6 weeks until my 40th high school reunion at Murrah High School in Jackson, Mississippi, just a week or so after my first grandchild is due! A summer of big celebrations. 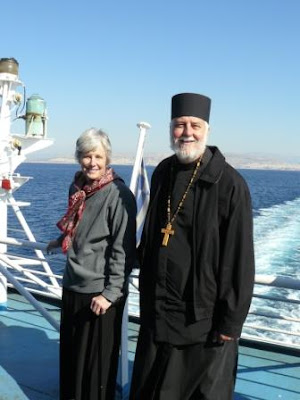 Oh, and I would be remiss not to send a shout out to our dear friends, Father Paul and Sissy Yerger, who are also celebrating their (38th) wedding anniversary today! We didn’t know the Yergers when we got married, but our friendship has blossomed over the years, and we shared a wonderful 12 day trip to Greece with them in October of 2007. Here they are on a boat ride to the island of Aegina. Many years, dear friends!