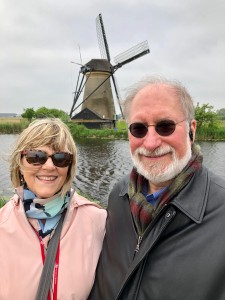 Another excursion that I was surprised by on our Rhine River cruise was also in the small town of Kinderdijk, where we visited the cheese-making farm. Again, I’m a city girl, and I rarely find joy in rural settings, but the history and culture and charm of these historic windmills was something I didn’t expect. 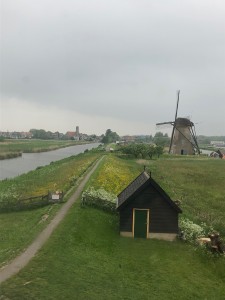 The windmills in Kinderdijk—the largest concentration of windmills in the Netherlands—are a UNESCO World Heritage Site. These 19 windmills are a feast for the eyes, and their story is fascinating.

The families who lived—and continue to live—in them keep them working, and they are called “millers.” When I first heard our tour guide use the term, I thought she was talking about people who mill grain. But no, they are people who keep the windmills working. 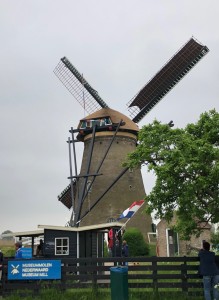 The windmills were erected in the 1600s to drain the Alblasserwaard polders, which had suffered floods since the 13th century. One such flood, the Saint Elizabeth Flood of 1421, is both the source of the name Kinderdijk and of the associated fairy tale, “The Cat and the Cradle”: after the storm, a wooden cradle was spotted on the flood waters, in which a cat jumped to and fro to keep the cradle afloat.

When the cradle approached the dry land of the dyke, the locals discovered a baby inside—hence the name Kinderdijk, Dutch for “children’s dyke. “ 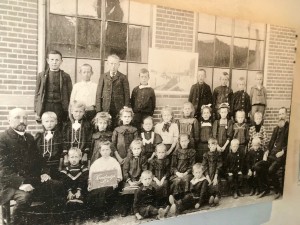 The one windmill that we were allowed to go inside had pictures of the family who lived there years ago, with their 15 children! The sad story is that one of the toddlers was running towards the blades of the windmill and the mother rushed to stop her, saving her child, but losing her own life. 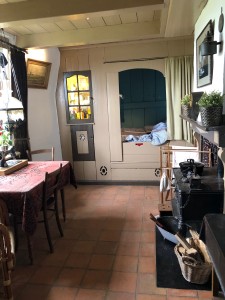 When I put pictures of the inside of the windmill on Facebook, my Goddaughter Katherine, who has three teenagers, commented that her kids wanted to live in a windmill! (They love adventure.) The quarters were so small that I can’t imagine where everyone slept. The beds were tiny, and I heard that the adults slept sitting up. It would take a hardy bunch to want to live there and keep the windmill working!

Stay tuned as I move into the city of Cologne, Germany, in my next post.