The other day a friend and I visited over coffee and talked about our lives. We both turned 60 this year, and we agreed that the first fifty years went by fairly slowly, but the last decade seemed to pass quickly. We talked about our goals, our desires for the final third (if God wills) of our lives, and shared a bit of our anxiety about how fast these days/years might progress. It was a sobering conversation.

And then the November/December issue of Poets & Writers Magazine arrived in my mailbox and I devoured Kevin Nance’s profile of Joan Didion, “The Light at Dusk.” 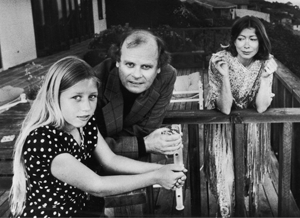 Joan’s memoir, The Year of Magical Thinking (Knopf, 2005) was about the death of her husband, the writer John Dunne. Six years later she’s publishing another memoir, Blue Nights, about the death of her adopted daughter, Quintana. (Blue Nights will be released on November 1…. I’ve pre-ordered it to be downloaded on my Kindle next Tuesday.) That’s Quintana, with her parents.

I’ve always been attracted to dark writing, especially brilliant, dark writing, like Didion’s. She doesn’t write for therapy, although she says that writing can be therapeutic. She speaks of writing about her daughter’s death and other difficult things:

“I’ve always had the sense that if there was ever any doubt about whether I should deal with something, then I have to deal with it…. The image that always come to my mind is that if you keep your eye on the rattlesnake,t he rattlesnake can’t get you.”

“Didion’s great stylistic achievement is a seeming emotional detachment that can’t quite suppress the passion lying just beneath…. The tone of the writing does not call attention to itself, and yet it’s distinctively hers. And that is what I think is the great power of her writing.”

The title of this memoir, Blue Lights, comes from the quality of the light at dusk, which she misses since leaving her native California for New York City. She explains in the prologue of the new memoir how that twilight is replaced by “the blue of the glass on a clear day at Chartres, or that of the Cerenkov radiation thrown off by the fuel rods in the pools of nuclear reactors.”

That captures how I’m feeling as I enter the seventh decade of life. So, why am I drawn to the blue night, to all this darkness and talk of illness and death? I’m not sure, but somehow I find comfort in it. Check back in with me after I read and review the book… hopefully in a few weeks.

I’m off to Seagrove Beach, Florida, tomorrow for another month of writing by the sea. Last year I wrote ten chapters, and this year I hope to finish this novel. But more than that, I hope to make peace with the blue nights.

4 thoughts on “>The Dying of the Brightness”