>As one of the co-directors of the 2010 Creative Nonfiction Conference, I thought I was prepared for everything that might come up during the conference. The little bumps and gliches that happen no matter how well you prepare for a gathering of over 100 emerging writers and faculty from all over the country. But it’s not the unforseen blips that have shaken me this weekend. No, the thing I didn’t see coming was tonight’s reading at Off Square Books by one of our faculty, the memoir and fiction writer, Robert Goolrick.

I had never heard of Robert Goolrick before this weekend, but when I learned that he had written both a memoir and a novel, I was interested. I introduced Robert and the others who were on the panel at our 4:15 session this afternoon, and when he spoke, something in his voice resonated with me.

Tonight at Off Square Books, he read from his memoir, The End of the World As We Know It, and I wept during much of the reading. Goolrick was molested by his father at a young age, and his memoir describes in the most powerful, dark, poetic prose I’ve ever read on the subject, the ongoing affects on the souls of those whose persons are violated in this way:

“If you don’t receive love from the ones who are meant to love you, you will never stop looking for it, like an amputee who never stops missing his leg, like the ex-smoker who wants a cigarette after lunch fifteen years later. It sounds trite. It’s true.

At this point I was making loud enough noises with my weeping that a few people around me reached out with tissues and hugs, and my friend, Kathy, asked, “Are you all right?’

Of course I’m not all right.

And then Goolrick reads the part about why he wrote and published the memoir:

“I tell it for the fathers The priests. The football coaches…. I tell it because there is an ache in my heart for the imagined beauty of a life I haven’t had, from which I have been locked out, and it never goes away.”

At the end of the reading, Goolrick asked the packed house if there were any questions. You could have heard a pin drop. We just applauded, and filed out, quietly. 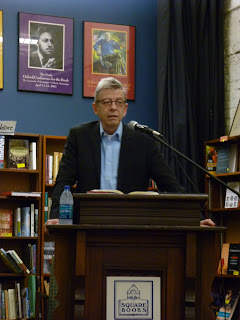 Down the street at the reception, we shared drinks and delicious food in the beautiful surroundings of an art gallery. I spoke with Robert Goolrick about my own experience and about the way his words resonated with me. He signed his books that I had purchased at the book store, including his novel, the New York Times best seller, A Reliable Wife. He looked me in the face, and then gave me a hug.

I can barely feel my legs beneath me.