Orthodox Christians don’t use rosaries for our prayers as Catholics do. We use prayer ropes. But I think the idea is similar. As our fingers slip between the knots and move prayerfully from one to the next, our hearts find the rhythm: Lord Jesus Christ, Son of God, have mercy on me, the sinner…. or simply: Lord have mercy, Lord have mercy, Lord have mercy. The Jesus Prayer, which has power to bring peace, courage, clarity, calm… all those things we need as we move about in this world so often full of unrest, fear, confusion, and storms.

I have a dear friend, Sue, who is a fine artist and a budding poet (and one of my early readers for my novel and short stories). She and I often explore the connections between our spiritual lives and art. Tuesday we 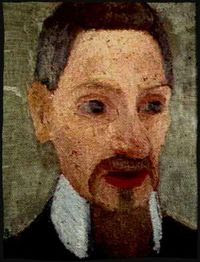 met for coffee and tea and she brought me some quotes from the Austrian poet, Rainer Maria Rilke (1875-1926). Why Rilke? In addition to his poetry, he wrote letters to his wife, letters to a young poet, letters about the artist Cezanne, and more. He raises the bar for all of us who aspire to embrace life fully, not only its joys, but also its sorrows. My friend knew that I was struggling with embracing sorrows, and the loneliness that often camps out on the hearts of artists and writers. Her gift to me was timely. I’ve been writing poetry again, which is always a wakeup call to my soul that something’s stirring.

As an iconographer, I love that Rilke was touched by icons on his trips to Russia. He called them “milestones of God.” There’s a description by Clara Rilke that describes his encounter with icons: “A Ukrainian peasant was so touched by the inwardness of Rilke’s appearance that he gave him an icon which until then had been the protector of his cottage. Rilke’s attraction to these works was not primarily artistic; there was a presence in them of the artists’ nearness to God, and it was this that moved him.”

So today I’d like to share some of Rilke’s wisdom. I hope his words inspire and strengthen you. If they do, please leave a comment and share your thoughts with my readers … or leave a quote of your own choosing. As Madeleine L’Engle says, “we all feed the lake.”

And now, a Rilke sampler:

For one human being to love another: that is perhaps the most difficult of all our tasks, the ultimate, the last test and proof, the work for which all other work is but preparation.

What is required of us is that we love the difficult and learn to deal with it. In the difficult are the friendly forces, the hands that work on us. Right in the difficult we must have our joys, our happiness, our dreams: there against the depth of this background, they stand out, there for the first time we see how beautiful they are.

Surely all art is the result of one’s having been in danger, of having gone through an experience all the way to the end, where no one can go any further. The further one goes, the more private, the more personal, the more singular an experience becomes, and the thing one is making is, finally, the necessary, irrepressible, and, as nearly as possible, definitive utterance of this singularity…. Therein lies the enormous aid the work of art brings to the life of the one who must make it, that it is his epitome, the knot in the rosary at which his life says a prayer, the ever-returning proof to himself of his unity and genuineness, which presents itself only to him while appearing anonymous to the outside….