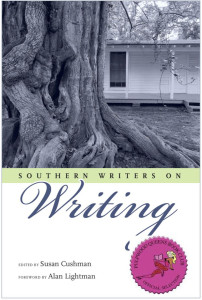 Kathy L. Murphy, founder of The Pulpwood Queens Book Clubs, has chosen the following books as the “books of the month” for 2019. She has also chosen “bonus books” for each month. Her 700+ book clubs internationally are encouraged to read the book of the month and discuss it at their monthly meetings. It was such a joy to meet and visit with many of these authors last weekend at the annual Pulpwood Queens Girlfriend Weekend in Jefferson, Texas, where I moderated a panel for Southern Writers on Writing. I’m honored that SOUTHERN WRITERS ON WRITING is the book Kathy chose for January! Looking for some great books to read in 2019?  Here is the Queen’s list:

Theologies of Terrain by Tim Conroy
In Pieces by Sally Field
Road Kill Art And Other Oddities by Niles Reddick
Reading the Coffee Grounds and Other Stories by Niles Reddick
The Draw of Broken Eyes & Whirling Metaphysics: Poems by Charles Clifford Brooks III

The Birds of Opulence by Crystal Wilkinson
Edge of the Wind by James E. Cherry
A Celebration of Words: Volume One: Essays from Michael Connelly, James Lee Burke, Horton Foote, and Jeanette Walls by Kacey Kowars, Introduction by Kathy L. Murphy

MARCH – Nothing Is Forgotten: A Novel by Peter Golden
Bonus Books:

Haufraus Honeymoon: Lov,: Language, and other Misadventures in Germany by Beth M. Howard
The Lost Family: A Novel by Jenna Blum
Stand Forever, Yielding Never: The Citadel in the 21st Century by John Warley

APRIL – Confessions of a Christian Mystic by River Jordan (I read an ARC and can’t wait for this to come out. It’s awesome!)
Bonus Books:

Mourning Dove by Claire Fullerton
Workin’ Our Way Home: The Incredible True Story of a Homeless Ex-Con and a Grieving Millionaire Thrown Together To Save Each Other by Ron Hall
The Fighter: A Novel by Michael Farris Smith

Ordinary Magic: Promises I Kept to My Mother Through Life, Illness, and a Very Long Walk On The Camino De Santiago by Cameron Powell
The Good Neighbor: The Life and Work of Fred Rogers by Maxwell King
The Unmade World by Steve Yarbrough

JUNE – The Glovemaker: A Novel by Ann Weisgarber
Bonus Books:

Beach Calling: A Devotional Journal of the Middle Years and Beyond by Missy Buchanan
How We Came to Be by Johnnie Bernhard
The Secrets of the Cormandel House by Jennifer Mueller

The Secret of Clouds by Alyson Richman
The Curiosities by Susan Gloss
Art Matters: Because Imagination Can Change the World by Neil Gaiman

The Way of Beauty by Camille Di Maio
The Promise Between Us by Barbara Claypole White
How To Be A Good Creature: A Memoir of Thirteen Animals by Sy Montgomery

Two Minus One: A Memoir by Kathryn Taylor
Shoe Burnin’ Season: A Womanifesto by R.P. Saffire a.k.a. Suzanne Hudson
Countenance by Joy Ross Davis
A Promise Given: A Henrietta and Inspector Howell Novel by Michelle Cox

OCTOBER – When The Men Were Gone: A Novel by Marjorie Herrera Lewis
Bonus Books:

NOVEMBER – The Widows: A Novel by Jess Montgomery
Bonus Books:

Uncommon Type: Some Stories by Tom Hanks
The Lost Words by Robert McFarland