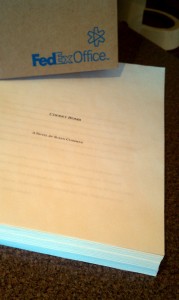 Three months ago today, I put my finished manuscript, Cherry Bomb: A Novel, in the mail to a freelance editor in Oxford, Mississippi. I was in Denver, awaiting the birth of my third granddaughter, Gabrielle Sophia, who would make her appearance one week later, on April 23. I’ve never given birth (my three children are adopted) so being with my daughter in labor and delivery was the closest I had come to this experience which my best friend describes as a “holy war.” Bloody. Messy. Painful. Joyful. Full of every extreme of emotion known to the human heart.

Giving birth to this novel is proving to contain some of those emotions. In my naiveté I had envisioned whipping through the final revision process in a matter of weeks. Just as an expectant mother might hope for a speedy delivery.

Especially since my “first completed draft” wasn’t really a first draft at all. Unlike most writers I know, I don’t write “shitty first drafts” and revise later. I revise as I go. I just can’t seem to help myself. So by the time I sent the competed manuscript to an editor, it had been through dozens of rewrites. Some sections had gone through the scrupulous process of critique sessions at writers workshops. Others had been under the knife of a writing critique group. And the first 50 pages had made the short list for Novel-in-Progress category of the 2011 Faulkner-Wisdom Creative Writing Competition hosted by the Faulkner Society’s Words & Music Literary Festival. I thought my work was almost finished. 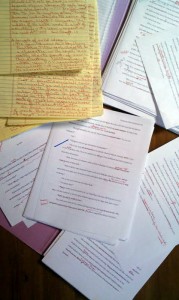 Three months later I am moving at a snail’s pace through the revision process. Of course I have also been traveling and involved in personal and family events, so my time hasn’t been guarded this summer. There has also been the joy of a few events surrounding the publishing of Circling Faith: Southern Women on Spirituality, which contains my essay, “Chiaroscuro: Shimmer and Shadow.” I am enjoying those events, but I also look forward to the month of August, which I am “bookmarking” as “finish the revisions” month!

In the midst of all t 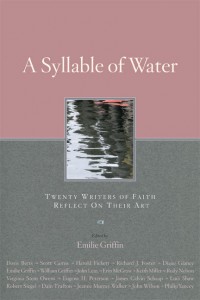 his bloody work, I stop to read a bit of what other authors say about this process of revision. This morning I read Diane Glancy’s essay, “After the Fire of Writing: On Revision,” in a wonderful anthology, A Syllable of Water: Twenty Writers of Faith Reflect on Their Art (2008, Paraclete Press). Glancy puts a spiritual spin on the revision process:

“In fact, when I write there usually emerges both a death and a resurrection. I begin a piece. I find it dies on the page. It isn’t what I had hoped. It falls short. It falls flat. It goes nowhere. Then I find a new beginning somewhere embedded in the piece and start writing into it again.”

She calls this rewriting “the snarl and gnarl” of the writing process, saying, “It is never clean. It is never under control.” Images of the labor and delivery suite at the hospital emerge as I read her words. But what all is involved in this painful and messy process? Glancy describes several elements, including SOUND, PERSPECTIVE, DEPTH, and VOICE:

“I also tinker with the sound of a piece, reading it out loud for the rhythm…. Taking out words here and there to tighten the momentum, until what I heard in the inner ear was there on the page when I read it.

“What is the piece about? Revision develops perspective. Just what is it I want to say? Just how am I going to say what I say?

“Revision develops layers and dimensions. It gives the necessary depth.

“Writing and rewriting are about finding voice. That term, voice, takes revision to define. Voice is when the imaginative being from your head is on the page when you read what you have rewritten. Your style of writing, the way you write, is tempered or revised by the voice of the piece.”

Whew. Hard work, this labor and delivery stuff. Maybe if I had gone through the physical process of bringing children into the world I would be better prepared for this holy war. Instead, I rely on the expertise and experience of a brilliant midwife (freelance editor). I can hear her voice as I work, whispering in my ear. I have written some of her dictums on sticky notes and placed them all around my computer monitor so I can be reminded as I continue to push this child through the birth canal:

“What is each character struggling against?”

“Consider using exposition instead of dialogue to share information about graffiti and iconography.”

“Use more SOUND… and SILENCE.” 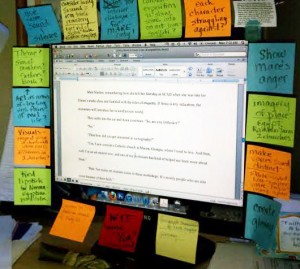 I remember standing beside my daughter as she gave birth. Her husband and I held her hands and chanted our mantra for hours. “Breathe. One, two, three, four, five….” And “good job!” Whatever we could think of to ease the process. But she had to do the work. And it was grueling. It was hard not to wish for a C-section during the pain of a complicated delivery. And I wonder if adoption might have presented as a pain-free option in the corners of her mind. But Gabrielle Sophia is the reward of her labors, and she is magnificent!

The metaphor breaks down, of course, when you try to compare a book to a person. A novel to a human being. A published work to a newborn baby. But for me, right now, this is my labor. And I’m trying to listen to my midwife, and to the wisdom of those who have been here before me. When I feel like my book is stuck in the birth canal, I’ll try to remember Glancy’s words:

“It is in the vital act of rewriting that I find and hopefully achieve the voice of my work. Revision, for me, is the act of passage through the nascent stages of writing.”

[P.S. I’m driving down to Jackson today, for a reading/signing of Circling Faith: Southern Women on Spirituality, at Lemuria Books at 5 p.m. Wendy Reed will also be there. So if you’re in the Jackson area, please join us!]