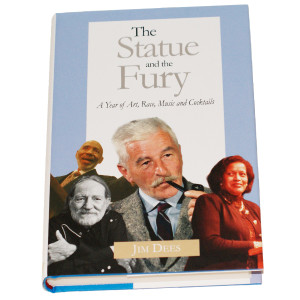 I just finished reading my fifth book of 2017—Jim Dees’ wonderful memoir The Statue and the Fury: A Year of Art, Race, Music and Cocktails (Nautilus Publishing, 2016).

Jim is perhaps best known as the MC for the radio show, “Thacker Mountain Radio Hour,” (since 2000) which is broadcast live on Thursday nights for about nine months of the year at Off Square Books in Oxford, Mississippi. The show features an author reading from a book, a featured musical performance, and the house band. I’ve been to several of these over the years, and I’ve always admired Dees’ humor and professionalism at the helm. So when I heard about his book, I had to have it. He inscribed it for me following the last show I attended, back on November 3 when Cassandra King was the author guest.

Four of the six blurbs on the back cover are from well-known authors who live in Oxford, including New York Times bestselling author Ace Atkins, who called the book “A truly unique reflection on a storied Southern town at a turning point.” And Jack Pendarvis says, “It’s funny, violent, serene and surprising—a living thing, like a tree.” Tom Franklin writes that it’s “a loving look at small-town life, journalism and politics… this is the book I’ve been waiting for.” And Beth Ann Fennelly says it “provides so much entertainment that we might not notice how much we’re learning. This is a thoroughly necessary book.”

I’ve spent enough time in Oxford to recognize many of the locals Dees writes about, and I came of age in the turbulent 1960s, so I’m right there with him as he delves into Oxford’s (and Mississippi and the country’s) history of racial unrest. Taking one year—1997—and one event—the controversy over the installation of a statue of William Faulkner outside Town Hall to commemorate his 100th birthday—Dees covers a multitude of famous (and infamous) people’s influence on the life of Oxford. The resulting saga reminds me of Forrest Gump, the way he tells a story within a larger story.

Drawing from his years as a reporter for the Oxford Eagle, Dees has a brilliant journalist’s eye for details, as well as an intuition about people that comes through in his interviews and reflections. I’m thrilled to have him among the 26 contributors to an anthology I’m editing right now—So Y’all Think You Can Write: Southern Writers on Writing (University Press of Mississippi, 2018). His essay, “Off the Deep End,” is a candid story of learning to overcome fear—first of the high dive, and later of “flinging himself at the universe as a writer.” His voice in the essay is unique and genuine, just as it is in The Statue and the Fury. BUY THIS BOOK AND READ IT!