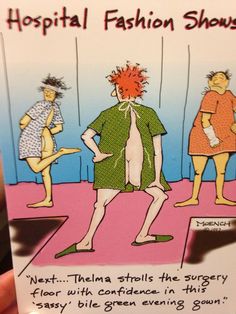 The waiting room at a cardiology imaging center is a microcosm of the medical world of Baby Boomers. This afternoon I spent three hours getting an echo cardiogram and a nuclear stress test. In between each phase of these tests, patients return to the “interior waiting room” (in our hospital gowns) to wait for the next part. Today the two men and four women in my group shared interesting stories and bonded in a way you wouldn’t expect strangers to bond in a three-hour period. Especially knowing that you’ll probably never see each other again. And although I was a bit anxious about having the tests done (because of an irregular EKG of unknown cause at my annual physical recently) my anxiety was lessened by the company of these men and women.

Most of us were in our sixties, although one woman must have been in her seventies since her grandchildren are in college or recent grads. But she looked so young. Sadly, her mother died of a heart attack at age 36, and she had her first one at age 40. She’s got stents in her heart, her legs, even her kidneys. Also a new-fangled pacemaker (dual chambers?) So she was used to having these tests and more (like cardiac caths). She had a beautiful smile (loved those dimples!) and was calm and cheerful all afternoon.

One of the men was nervous about whether or not he could do the treadmill test, since he had a hip replaced a couple of years ago. When he returned to the waiting room to tell us he aced it, we high-fived him like old friends.

The hot topic was the injection they give to stress your heart if you can’t do the treadmill test. My husband had this done about  ten years ago and felt like he was dying—I guess he had a strong reaction to it. He claims they have quit using that drug, but I was scared to try it and was determined to do the treadmill test, although I have screws in my right ankle and haven’t done anything more stressful than the elliptical (no impact) or walking 5-6 miles a day in Paris last May, so I wasn’t sure how I would do. NO PROBLEM. Sure, my blood pressure got up to 180/something, and my pulse hit 160 (which they wanted it to) but my ankle never hurt and I wasn’t huffing and puffing too badly. More high-fives when I returned to the waiting room.

A 62-year-old black woman who looked ten years older and was too impaired to do a treadmill test was also anxious about the injection. She also has a pacemaker. The last time she had it she got nauseated and threw up, feeling like her heart was leaping out of her chest. Today’s experience for her was much milder, thank God. They must have changed the chemical they use.

The other gentleman also has metal in his foot and leg (like me) from falling out of a hunting blind and wasn’t sure he could do the treadmill. Another ace. Another high-five.

The last woman in our group was a bit overweight and unable to do the treadmill, but she weathered the injection fairly well, telling us that her blood pressure bottomed out and they had to deal with that, but otherwise, no problem.

I left three hours later greatly relieved (and feeling healthier than others in the group) although I won’t know what’s causing the irregular EKGs until some time next week. I’m always more anxious about the tests themselves than the results (I know that’s irrational but I’m a wimp) so for now I’m just glad this part is over. Next up? A colonoscopy this June. I’m three years overdue and finally getting my courage up. (I have done the FIT test every year for the past few years.) I’ve heard they’ve made the prep much easier (I threw up doing the prep last time, which was 13 years ago) so I’m getting ready to schedule this for early this summer. I don’t think the recovery room at the GI Center will be nearly as much fun….