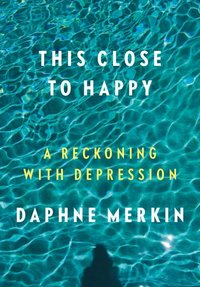 I just finished reading my 6th book of 2017—This Close to Happy: A Reckoning With Depression by Daphne Merkin. Looking at my list so far this year, I’ve read two novels and four nonfiction books. I’m getting in the mood for some southern fiction next, and have recently gotten interested (again) in Anne Rivers Siddons, probably because of Pat Conroy’s words about her in A Lowcountry Heart. I read a couple of her books many years ago, and now I’m thinking of reading one of her oldest books Heartbreak Hotel (1976), which is about growing up in the South in the 1950s. But I’ve also got a copy of The Girls of August. Maybe I’ll save that one for this summer. But for now, back to This Close to Happy.

Daphne Merkin is an accomplished writer, with regular contributions to The New Yorker, Elle, The New York Times and other publications. Her novel Enchantment won the Edward Lewis Wallant Award for best novel on a Jewish Theme, and one of her two collections of essays was a New York Times Notable Book of the Year.

Here’s an excellent review in the New York Times by Andrew Solomon.

And here’s an interview on NPR.

So I won’t write a review here, other than to say that I think this is an amazing book. I’ve read a fair amount of books about mental illness in general and depression in particular. This is one of the best. Merkin not only knows her stuff—from years of therapy and pharmaceutical treatment and detailed research—but she has also lived with this disease her whole life. Growing up in a home where she was abused by a nanny and never received even basic, minimal nurturing from her parents, she suffered clinical depression even as a child, through post-partum times, into young adulthood and middle age. And yet, she is still here. (She writes about suicide a lot in the book.)

One of my favorite quotes:

The opposite of depression is not a state of unimaginable happiness, but a state of relative all-right-ness.

There’s so much wisdom in that one sentence. When I’m depressed, I imagine a “high” I’m missing from life, not just a calm “normal,” whatever that might be. And being a writer, I’ve always assumed that I come by my depression honestly, as did Virginia Woolf, Sylvia Plath and a plethora of others. As Merkin says:

It is by now well documented that nonlinear creative types, artists and writers in particular, often suffer form depression; whole books have been devoted to exploring the high incidence of both unipolar depression and bipolar depression in this group. Anywhere you look, there they are, the unhappy poets and painters, drinking or drugging themselves into a stupor….

I can relate. When I’m actively (and successfully) working on a creative project, I experience a bit of a high. But as soon as the project is finished or I’m floundering with what to do next, depression creeps in. What does Merkin say life has to offer at these times?

But perhaps I’ve all along underrated the pull of life itself, slyly offering up its enticements. I tend to give short shrift to these enticements when I’m sinking, but they are very real. They would include but are not limited to the supreme diversion of reading and the gratifications of friendship, the enveloping bond of motherhood and the solace to be found in small pleasures, such as an achy Neil Young son or finding the perfect oversized but not voluminous white shirt.

The things in life that entice me might not be all the same things that pull Merkin back from the edge, although some are similar. She’s not a spiritual person (not even a religious Jew, and doesn’t believe in an after life) like I am, so there’s that. Even at my darkest moments, I would never consider suicide. Instead I cower emotionally at home with bags of potato chips and excessive amounts of vodka or wine. Reading Merkin’s book doesn’t fill me with hope (not her intention, she says) but gives me a feeling of community with others who suffer depression. Mine is extremely mild compared to hers, but she would be the first to tell me that it’s mine, and not to diminish it.

So I give this book five stars. And I hope that Daphne Merkin has found a prolonged state of relative all-rightness. Actually, I’d love to picture her even closer to happy.

2 thoughts on “This Close to Happy”