>After such an “up” day on Friday, Saturday was really a downer. Although I woke up with NO PAIN in my foot at all (this was the good part), I decided to quit taking Percocet. But then it hit me. The cumulative affect of the Percocet all week… and I spent most of the day dealing with really unpleasant side affects. Not blogworthy. Just saying.

By evening I was “up” again, thanks in part to my friend (and nurse) Margaret, who gave good advice, to my sweet hubby who ran to the drug store for me and put up with me all day, a sweet visit from another Goddaughter, Julie, who brought chicken soup and visited… even while I was still nauseated. And then the surprise of the day: Dan and Lori O’Brien’s Greek Chicken and Orzo and wine (yes) … suddenly tasted good and made everything better.

More artwork on my cast (no photo right now) and just more tangible reminders of how loved I am. These dear friends from my church are just angels. 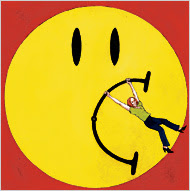 ing I did what I do every Sunday morning if I don’t go to church. I drank coffee

and read the New York Times. I really enjoy the NYT Magazine and Book Review, but today in the “Sunday Styles” section, there was this great article, “Take Me as I am, Whoever I Am,” by Terri Cheney. She’s got a book coming out in February, Manic: A Memoir. Terri is bipolar. And she writes about it with candor and humor and clarity. Can’t wait to read the book.

Terri’s “ups and downs” were the inspiration for this blog post… and also got me to working on notes for an essay about some of my own struggles. Or maybe a book of essays. I spent some time editing a piece I’m considering sending in for Dinty Moore’s critique session at the Creative Nonfiction Conference at Ole Miss in February… but then again I think I’ll wait ‘til closer to deadline and see if I come up with something that’s more in the memoir genre. We’ll see.

I’m still going “up and down” about writing nonfiction vs. fiction… so I enjoyed part of the morning continuing to read K. L. Cook’s The Girl from Charnelle. Yes, it’s fiction. But literary. And he makes you believe it could be true. It’s what good fiction can do. Here’s an excerpt… the protagonist, Laura, has gone with her family to visit “Aunt Velma” on Easter weekend, April, 1958. Backstory: Aunt Velma’s husband committed suicide.

Aunt Velma claimed that the church had saved her after Uncle Unser died, literally saved both her physical and spiritual lives, and she had devoted herself to volunteer work and to intensive study sessions with other members of the congregation, particularly those who’d lost spouses, parents, children, brothers, or sisters…. Laura was fascinated and often moved by Aunt Velma’s fervor. Regardless of whether or not you believed what she believed, it was clear, to Laura at least, that it had changed Aunt Velma for the better….It made her generous and forgiving, and sustained her as she grew old, lit her from within rather than turning her cynical and ossified, as Laura could easily see happening to someone else in Aunt Velma’s shoes. When your husband kills himself… well, no telling what could happen to you.

And here’s one more teaser… at the end of an eventful weekend, Cook frames the days’ events (through Laura’s voice) in prose that is almost lyrical:

It seemed as if the fall from the horse had shaken whatever was bad or festering out of her, that those few minutes of deadness had made way for this sense of pleasure she now felt. She smiled to think of what Aunt Velma would make of this….maybe that’s how people like Aunt Velma find themselves, through these odd connected moments, ripened with mystery, like beads on a string─leaving town, falling off a horse, brooding over the dead, eating until you’re stuffed─and poof! ─through some magical alchemy, you’re crazy for Jesus.

I’ll be curious to see how Cook has Laura (who is 16 when the book begins) deal with the affair she’s having with a married man… a friend of her father’s, actually. How he “frames” her actions in light of her mother’s desertion and the other events in the small Texas town in the 1950 and 60s. I’ll get back to you… won’t give the book a thumps up or down ‘til the end.

Meanwhile out in the den, (watching football with hubby this afternoon) one of our homeboys made good… Eli and the Giants just won their playoff against the Cowboys… but earlier we watched Peyton and the Colts lose… we were in school with Archie and Olivia, so it’s hard not to pull for his boys. I’m not really a football fan, but hubby did something to connect us to the Manning boys forever. November 17, 1969… the night Ole Miss beat the Big Orange… he proposed to me. And I said yes. Little did we imagine, that night, that two of our kids would one day to go the University of Tennessee.. and watch Peyton play. God, we’re old. And poof!… we’re crazy for Jesus. Just like Aunt Velma. We all have our ups and downs.