>Susan May Warren , award-winning author of more than twenty books, and Rachel Hauck, multi-published author of romance and chick lit, have a blog called Book Therapy. It’s a place where writers can submit parts of their works-in-progress and get “therapy” for their writing… from Susan and Rachel, and from other members. I’ve been dabbling in it for a few weeks, and not long ago they ran a “contest.” They asked members to write a short piece telling who our voice of REASON and our voice of PASSION are in our work-in-progress.

So, today they announced that I was one of three winners, and they published my comments here: (scroll down a few paragraphs to the one that begins Susan C had a great point to accompany her example… ) 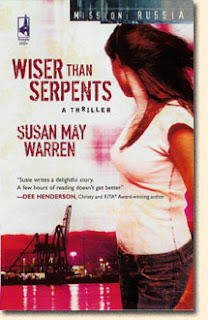 I’ll even get a free copy of Susan’s upcoming book, Wiser Than Serpants . I love the way the internet connects complete strangers through common threads of interest…. Susan’s Mission: Russia series deals with issues like human trafficking in Russia. Her web site has a link to the International Justice Mission. The IJM was the beneficiary of the Art and Justice Show 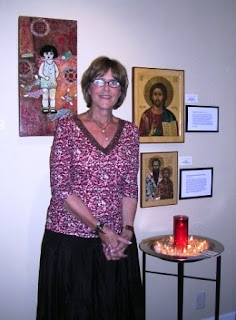 I was asked to participate in last spring. There were about six artists displaying their works, and I had several icons in the exhibit. The organizer, Terry Carter, suggested I have a place where visitors could light a candle in front of the icons and say a prayer for the victims of human slavery. I miss Terry and her husband, Mike, (that’s Mike and Terry on the right end of the group picture) who taught art at Westminster Academy here in Memphis for many years. They moved away last summer to pursue their art work full time.

Back to voices of passion and reason. I love this story that a friend sent me via email today. It’s a great example of the voice of passion winning out over the voice of reason in the main “character,” an elderly gentleman. (I don’t know if it’s a true story or not. It’s through the voice of a nurse.)

It was a busy morning, about 8:30, when an elderly gentleman in his 80’sarrived to have stitches removed from his thumb. He said he was in a hurry as he had an appointment at 9:00 am.

I took his vital signs and had him take a seat, knowing it would be overan hour before someone would be able to see him. I saw him looking athis watch and decided, since I was not busy with another patient, Iwould evaluate his wound. On exam, it was well healed, so I talked toone of the doctors, and got the needed supplies to remove his suturesand redress the wound.
While taking care of him, I asked him if he had another doctor’s appointment this morning, as he was in such a hurry. The gentleman told me no, that he needed to go to the nursing home toeat breakfast with his wife. I inquired as to her health. He told me that she had been there for a while and that she was a victim of Alzheimer’s Disease. As we talked, I asked if she would be upset ifhe was a bit late. He replied that she no longer knew who he was, that she had notrecognized him in five years now.
I was surprised, and asked him, “And you still go every morning, eventhough she doesn’t know who you are?”
He smiled as he patted my hand and said, “She doesn’t know me, but I still know who she is.”

Another (true) story about passion trumping reason is the story of the Holy Martyrs Raphael, 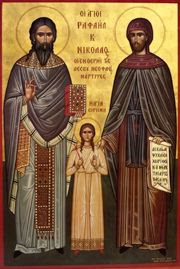 Nicholas and Irene, who are commemorated on Bright Tuesday in the Orthodox Church. (Today is Bright Tuesday.) All three were martyred by the Turks in 1453 on the Island of Lesbos. In June of 1960, the Saints started to appear both in dreams and in broad daylight and were seen by many pilgrims and they revealed who they were.

Miracles like this one, and of course the Resurrection and Ascension of Christ, remind me why we call it the Passion of Christ.

1 thought on “>Voices of Passion… and Reason”