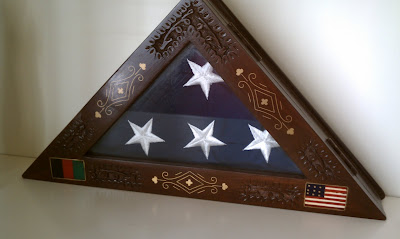 A couple of years ago our son, Jonathan, brought us this flag, which had flown on his helicopter in several missions in Afghanistan. Beautifully framed, with a certificate and photograph of the chopper included. I proudly displayed the flag on a wall upstairs in our house, near our daughter’s room.

Beth was home from grad school and was working at an architectural firm in the summer of 2009, and one day she said, “Mom, what’s that weird noise coming from that flag Jon brought home from Afghanistan?”

“What weird noise?” I was skeptical.

But sure enough, I discovered that at times the flag would start CREAKING so loudly you could hear it from downstairs!

I took the flag out of its wooden frame and examined it, and the frame, to see what the source of the noise might be. I showed it to Jon when he was home for Christmas last month, and he had no idea what might be causing it. He had given similar flags to a couple of close friends, and they haven’t mentioned hearing creaking sounds from their flags.

So, last night I began to unpack and organize my office in our new house, and I displayed the flag on a shelf, alongside a few other related items. I worked until around 2 a.m. in the office, and heard no creaking. whew.

But this morning around 9 a.m. I was down the hall from my office and heard what sounded like someone walking on creaky boards, so I went into the office and the flag was at it again… louder than ever. I took this video on my Droid. ALL OF THE NOISES ON THE VIDEO ARE COMING FROM THE FLAG. I was standing perfectly still.

3 thoughts on “>Weird But True”