>When the finalists were named back in July for the Memphis Business Journal’s 12 Annual “Health Care Heroes” awards, my husband, Dr. William Cushman, Chief of Preventative Medicine at the Memphis Veterans Affairs Medical Center, was surprised to be one of 4 nominees in the “Innovations” category. It was a nice honor, but he really didn’t think he had a chance to win because the other finalists were, well, sexier.

I mean, really, how could hypertension research compete with the other three nominees?

3. Medtronic’s 3DX Spinal System product reduces the amount of stress on back surgery patients during both surgery and recovery. Hooks, rods and screws—very sexy. 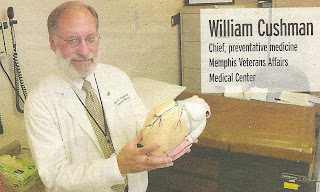 So, we got dressed up and went to the awards banquet on Thursday night, where we ended up sitting at a corner table in the very back of the room, with a nice view of the 250 or so guests at the event. There were two large screens in the front corners, so when the nominees were introduced, their pictures and a little bio were flashed up for everyone to see. Joe Birch (local TV news anchor) was the emcee, and he read the information as each finalist was introduced. But first he read the category description for each award, including the one my husband was nominated for, “Health Care Innovations”:

“This category honors a person or organization for breakthroughs in medical technology. Judging criteria for this category include: that the innovation is expansive in scope, affecting many people or holding the potential to do so; that the innovator was someone who was dedicated to creating innovations in health care.”

Expansive in scope. Dedicated innovater. Suddenly I realized that those words described my husband’s nearly four-decade career in the field of clinical trials, including landmark research that could change the way doctors treat hypertension (high blood pressure) and diabetes.

As thankful as I am for the work done at St. Jude and Le Bonheur—and I’m sure I’ll be a candidate for the fancy biomedical engineering products for my knees or hips one day—none of these nominees represent the dedicated work of one man’s nearly 40-year career, or the opportunity to affect the health of over 100 million Americans. 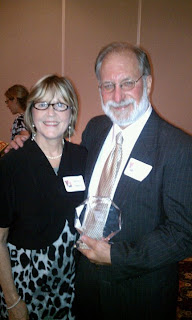 And so, when Joe Birch announced the winner, “William Cushman,” my husband just sat there in his chair, stunned. I stood up and started clapping, along with the other 200+ people in the room, as the words finally registered and he began making his way through the crowd to the stage. Tears filled my eyes as I watched him shaking hands with the dignitaries on stage and posing for a photo op with his award. He hadn’t planned an acceptance speech—seriously not thinking he would win—so he was unusually brief in his remarks, commenting that probably half the people in the room had hypertension, so he was just glad to be of help. 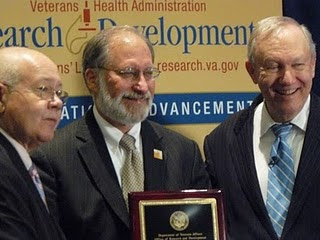 Back in April, Bill was awarded a national VA Research Award in Washington, D.C., which was exciting, but not surprising, in light of his work within the VA nationally. (It was a treat for me to accompany him on that trip to our nation’s capital, and to meet the other people involved in helping our veterans, and to hear him give a talk on the “Comparative Effectiveness of Research and Hypertension.”

If you’d like to read about the other 4 winners at the Health Care Heroes banquet, here’s a short article. 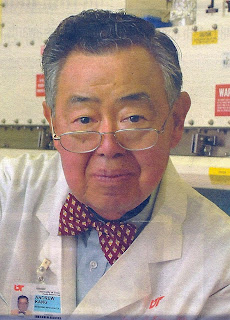 Congratulations to all the winners, and especially to our dear friend, Dr. Andy Kang, who received the Lifetime Achievement Award for his nearly 50-year career in medical research, especially in the field of connective tissue research, including rheumatology. It was humbling to both of us when Andy and his wife, Ellen, left their table to walk over and give us each a hug. I wish I had a picture of the four of us. The Kangs represent much that is good and honorable in the medical world—quiet, humble work dedicated to helping people. Kudos to Andy, and to my husband.