Last Wednesday I did a post about Joe Formichella, one of two authors I’ll be hosting for a literary salon in October. Today I’ll feature his wife, the author Suzanne Hudson, who will also speak at the salon. Like Joe, Suzanne has several books to offer at the salon, but I’d like to focus on her collection of short stories, All the Way to Memphis (2014 Rivers Edge Media). There are ten stories in the book, but I’ll only comment on a few of them here.

The first time I read Suzanne Hudson’s short story, “All the Way to Memphis,” I didn’t actually read it. I witnessed it performed as part of a musical and literary show performed by an amazingly talented group of writers and musicians, all contributors to the anthology, The Shoe Burnin’: Stories of Southern Soul. I was at the 2013 Louisiana Book Festival in Baton Rouge, there to sign copies of this stellar collection to which I was honored to be a contributor. 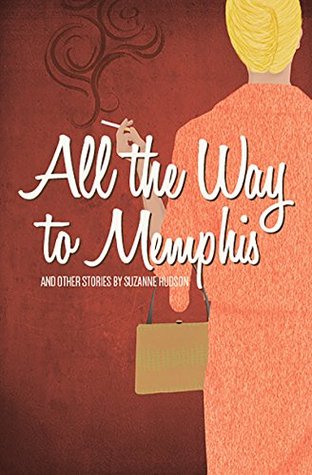 I already knew that Suzanne was a brilliant writer, having read some of her earlier work a few years ago. But this story explains a lot about why she has garnered comparisons to Flannery O’Connor and Eudora Welty. I was enthralled watching Nashville singer/songwriter/actress Lari White play “Savannah” to Suzanne’s “Clista” in the show:

She pulled to the shoulder of the road and watched in the rearview mirror as the girl gathered up hr things and bounded toward the waiting vehicle, then, catching her own eyes in the reflecting oval of silvered glass, saw a shadow of the emotion and primal fear that had captured Clista in the pre-dawn hours this morning, when she shot and killed her husband of forty-something years.

As Nashville musician and writer Marshall Chapman says, “Suzanne Hudson writes about what Southerners do when faced with dire circumstances. It ain’t always pretty, but sure as hell is readable.”

Hudson’s story, “Opposable Thumbs,” is filled with as many or more captivating turns of phrase, and her characters come to life on the page as she breathes her magic into them. Like Grandemona:

Grandemona’s deft white hands carved at a tomato, unwinding its skin into one languid serpentine strand.

Kansas’ kinship with Pinky grew out of penetrating black nights in the aftermath of her mother’s death, when Kansas crept from the big house to Pinky’s bed, nestling against the old woman’s flannel gown in a curled, soothing sleep.

‘You ingrown, child. Ingrown like a toenail, into me,’ Pinky would laugh, ‘because I tended your mama, all through her growing up, put my soul into her when she just a baby. Then her soul go into you….’

An equally colorful cast of characters peoples her story, “Yes, Ginny,” which circles around the disappearance of six-year-old Ginny’s stepfather:

Ginny’s relatives, a collective noun of arms and legs and faces, whose conversations writhed in and around one another’s like reptilian snarls in a pit of stranded snakes, offered theory after theory about where Johnny Lee Fowler had got off to….

“The Thing With Feathers” is a short (only seven pages) but powerful story—my favorite in the collection. There’s nothing unique about its theme. Sadly, childhood sexual abuse is all too common in many parts of the world, including 1950s rural Alabama, where Hudson sets this story. But it’s Hudson’s voice—and her amazing language itself—that holds the reader almost in a trance from the first line to the end. We are this little girl, age six, and now ten, and later twelve or thirteen, and we experience her most devastating assaults on her innocence over and over again, but each time always through her eyes. Nothing about the ending of the story surprises the reader, but it’s the darkly beautiful description of the journey that wows us. And in the end, “She would get him and reclaim herself, take herself by her little girl’s hand, dimpled and unscarred, to the place where her soul was hidden. And then, finally, the two of them would blend into each other, into the notes of the music, notes in chromatic half-steps and notes of modulation… where the thing with feathers could sit unabashed on its perch, and reach into its sweet, sweet depths, and sing.”

I hope I’ve teased your appetite for some seriously good Southern short stories. BUY THE BOOK to read them all!