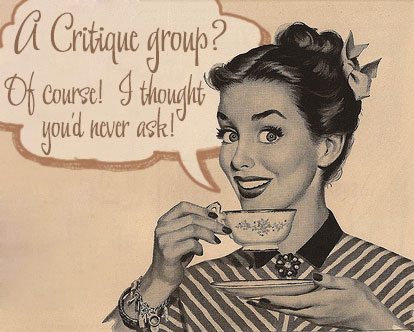 Our writing group had an interesting discussion last night. I had sent a link to the group in an email asking what they thought about this article in Writer’s Digest, “Tweaking Critiquing.” (Click on the link and scroll down to page 38 to read the article.) The main idea we discussed was the difference in giving “feedback” vs. “advice” to the person whose work was being critiqued. It turns out that as individuals we seem to respond differently to criticism, possibly because some of us have thicker skin than others, or just have a different expectation. We also talked a bit about the difference in the “job” of fellow writers vs. an editor. Helpful discussion in an environment in which I hope everyone feels “safe” to not only share their writing, but their opinions, and even emotions.

The article, written by Steven James offers lots of food for thought for writing groups. We really only discussed one aspect of his piece—Key #2—“Focus on giving feedback rather than advice.” Here’s a bit of what James says:

When I was in high school we had a basketball coach who would grab the ball from us if we were shooting poorly. “No, no, no,” he would say, “Do it like this.” And then he would demonstrate how to shoot.

Later when I played in college, the coach would watch us closely and then give us input. “Your shot looks flat. Keep an eye on the ball’s arch. Also watch that elbow. Try following through more—see how that works.”

I learned a lot more from that second coach than the first one.

And then James goes on to apply the example to writing:

Sometimes in their exuberance to help others, critique group members grab the ball and in essence say, “No, no, no. Do it like this.” But that’s never as effective as giving feedback to the writer so he can fix his own shot.

This isn’t a black and white issue, as I learned during our discussion last night, where we discussed specific examples of what some of us considered “feedback” and others might consider “advice.” An important bottom line, for me at least, is to be as positive as possible in the critique process. Otherwise the writer’s spirit can be crushed, and she might be discouraged in her efforts to move forward with revisions on the piece, or even in writing something new.

One more comment from James: (my quote-maker just quit working, but this should be indented)

I’m pretty sure after last night’s discussion the most of the folks in our group don’t prefer this approach, and are very comfortable having the members give their opinions. We have several published authors, some folks with MFAs, and in general a group of very polished writers. After our discussion, a new essay of mine was the first piece to be critiqued, and I was happy to see that the discussion didn’t seem to cause anyone to hold back on giving some very helpful feedback, and I left the meeting encouraged, rather than discouraged. I’m ready to revise the essay—using many of their comments—and get to work on the next one. (It’s a group of essays I’m penning for a memoir of sorts.)  I didn’t try to figure out which comments might be considered “advice,” and which ones were “feedback,” but instead just listened and took notes and responded to their questions. I’m so blessed to have these gifted writers in my life, and to also call them friends.

5 thoughts on “Writing on Wednesday: Feedback vs. Advice”