I’m hard at work on novel revisions this week (spent 4-5 hours on it yesterday and feel like it’s picking up momentum again) so I’m not going to spend much time on a blog post today. Instead I’ll share a few of my favorite quotes by writers on writing. These are taken from an article in the Writer’s Digest’s blog, “There Are No Rules,”(click the link to read all 72 quotes) and the post is by Zachary Petit. Thanks for doing the heavy lifting, Zac. Enjoy!

“The road to hell is paved with works-in-progress.”
—Philip Roth

“To gain your own voice, you have to forget about having it heard.”
—Allen Ginsberg

“Writing a book is a horrible, exhausting struggle, like a long bout of some painful illness. One would never undertake such a thing if one were not driven on by some demon whom one can neither resist nor understand.”
—George Orwell 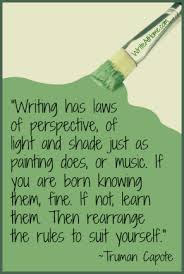 “Not a wasted word. This has been a main point to my literary thinking all my life.”
—Hunter S. Thompson

“When I sit down to write a book, I do not say to myself, ‘I am going to produce a work of art.’ I write it because there is some lie that I want to expose, some fact to which I want to draw attention, and my initial concern is to get a hearing.”
—George Orwell

“Making people believe the unbelievable is no trick; it’s work. … Belief and reader absorption come in the details: An overturned tricycle in the gutter of an abandoned neighborhood can stand for everything.”
—Stephen King

“If a nation loses its storytellers, it loses its childhood.”
—Peter Handke

“If I had not existed, someone else would have written me, Hemingway, Dostoyevsky, all of us.”
—William Faulkner

“Each writer is born with a repertory company in his head. Shakespeare has perhaps 20 players. … I have 10 or so, and that’s a lot. As you get older, you become more skillful at casting them.”
—Gore Vidal 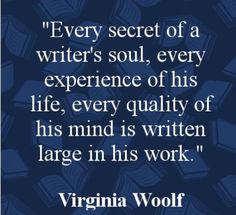 “If it sounds like writing, I rewrite it. Or, if proper usage gets in the way, it may have to go. I can’t allow what we learned in English composition to disrupt the sound and rhythm of the narrative.”
—Elmore Leonard

“There are no laws for the novel. There never have been, nor can there ever be.”
—Doris Lessing

“The writing of a novel is taking life as it already exists, not to report it but to make an object, toward the end that the finished work might contain this life inside it and offer it to the reader. The essence will not be, of course, the same thing as the raw material; it is not even of the same family of things. The novel is something that never was before and will not be again.”
—Eudora Welty

“Long patience and application saturated with your heart’s blood—you will either write or you will not—and the only way to find out whether you will or not is to try.”
—Jim Tully

“I think the deeper you go into questions, the deeper or more interesting the questions get. And I think that’s the job of art.”
—Andre Dubus III, WD

“Let the world burn through you. Throw the prism light, white hot, on paper.”
—Ray Bradbury

“Writers are always selling somebody out.”
—Joan Didion

“Write while the heat is in you. … The writer who postpones the recording of his thoughts uses an iron which has cooled to burn a hole with.”
—Henry David Thoreau