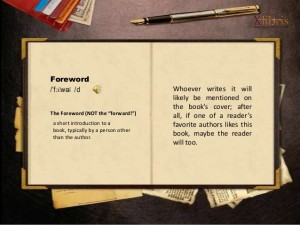 I’m putting together an anthology (watch for news about our publishing home soon!) with twenty-two contributing authors, and one of my tasks is to get in touch with the well-known woman I want to invite to write something for the front of the book. I say write “something” because I got called out in a group email with the contributors for misspelling this part of the book.

I spelled it “Forward.”

Embarrassing, since I’m the editor of the essay collection. But then it gets worse. Once I made the correction—changing the “a” to an “o”—I continued to err by leaving off the “e.”

This time I spelled it “Forword.”

Which I thought was one of the options for its spelling, but I’ve learned since that it’s really not an option. *hangs head*

Finally I spelled it correctly: “Foreword.”

In researching the correct spelling, I came across an article that does a great job of defining the parts of a book that come in the front and back of the main text.  The author, Pat McNees, explains first why these parts of the book should be in a certain order (which is interesting) and then clearly defines the difference between a preface, foreword, and introduction. Since I’m inviting someone else to write the Foreword, and as editor I’ll be writing the Introduction, I was hoping to get some clarity on these parts of the book. McNees quotes Words into Type:

A preface or foreword deals with the genesis, purpose, limitations, and scope of the book and may include acknowledgments of indebtedness; an introduction deals with the subject of the book, supplementing and introducing the text and indicating a point of view to be adopted by the reader. The introduction usually forms a part of the text; the preface does not.

So, here’s my dilemma: I was planning on doing some of what is defined here as the purpose of the preface or foreword within my introduction. I definitely plan to write about the genesis and purpose of the book, and then to go on from there to deal with the subject matter, mentioning the organization of the essays and so forth. Would this be wrong? Where could I go to see good examples?

I’ve had essays published in three anthologies—Circling Faith, The Shoe Burnin’, and Dumped—so I went to those books and read the introductions by the editors of each, and the foreword that was included in only one of them. I was relieved to learn that all three introductions—including the one in the book that also has a foreword—dealt with all the elements I plan to include in mine. Also of interest was the fact that two of the anthologies followed the above guideline that said that the introduction usually forms a part of the text. The page numbers prior to the introduction are small Roman numerals and the book’s pagination begins with the introduction. But in one of the three anthologies the introduction has small Roman numerals and the pagination for the text begins with the first chapter. But those are details my publisher will take care of. For me, the main thing is to understand clearly what my goals are when I write the introduction. I found these purposes from the Washington Biography Group helpful: (also in McNees’ article)

• To talk about how you came to write the book, especially if that will help draw the reader into the book.
• To sell the book to the potential reader/​buyer (lure them, hook them, make them want to read more).

• To answer the question: why this book? why now? why this person? why by this author?
• To talk about how you got the information — what your main sources were (and how they differ from other books on the subject, if this is book #189 on the Kennedys, for example)
• To provide a framework for what’s to follow — the hooks on which to hang the pegs of story details
• To provide, in brief, your main argument or point of view about the subject.

I’m going to consider each of these suggestions as I write the introduction. Meanwhile I’m having a great time reading and editing the essays as they arrive in my inbox, and I’m learning a lot about the publishing world as I continue to seek reprint permissions for the four essays that were previously published.  I really like the director of the press and will make an announcement once we finish working out the details of the contract. Stay tuned!