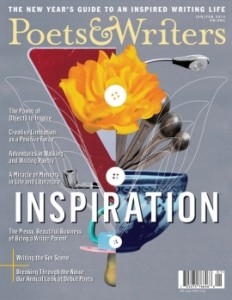 [Note: Wednesday’s post is a day late because I was enjoying New Year’s Day with my husband and friends, watching football, playing games at the kitchen table, and eating and drinking lots of yummy stuff. I hope you had a great day, too!]

I loved Beth Ann Fennelly’s article in the January/February issue of Poets & Writers: “Writing the Sex Scene: Nothing Throbbing, Nothing Turgid.” If you’ve ever met Beth Ann—or better yet, if you’ve ever heard her give a poetry reading—you would be on the edge of your seat to see what she has to say about writing a sex scene. Personally, she is the epitome of sexy, not only in her physical appearance, but also in her poetry and prose, on the page and when she’s giving a reading. But she never seems to be trying to be sexy. She just is. And I think that’s one key to her success in her writing.  (She’s also just gifted with words.)

In The Tilted World, the novel she co-wrote with her husband, Tom Franklin, she pulls off a love scene on a muddy levee in the middle of a historic flood. At that point in the book she and Tom have made us care so much about the characters that our hearts swell with their bodies as they consummate their love in the midst of life-threatening circumstances.  Sure the scene is lusty enough, but it rises above the carnal act just as the characters rise above the tragic situation in which they find themselves. And Beth Ann uses words that are appropriate to the historic setting, always keeping the reader safe. You can read my interview with Beth Ann here, including an excerpt from that love scene. 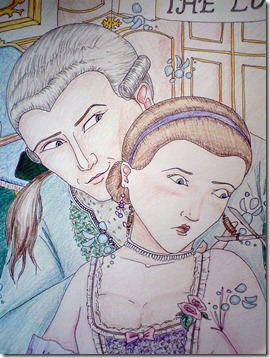 Beth Ann’s article made me think about the difference in writing a “love scene” and a scene where sex is involved, but not love. Like scenes of sexual abuse or rape. In writing those kinds of scenes in my novel, I spare no words that help the reader see and feel the pain and the significance of what the characters are experiencing.

It’s graphic, but not for the sake of being graphic. The words and the tone must fit the story line at that point in the book. Here’s a sample from Cherry Bomb. In this scene, twelve-year-old Neema is forced to have sex with her Uncle’s boss, a powerful magistrate, in fourth century Egypt.

Hasani removed Neema’s tunic. His eyes fell on the glistening emerald between her dark brown nipples. His mouth was drawn to her breasts even as his heart hungered for the jewel. Where could she go? She knew what to do when Uncle Imad was touching her. He was family, and she would tell herself he loved her. Hasani was a big man, much larger than her uncle. When he came inside her the pain was so great that she felt as if she were tearing apart.

I think it’s important that sex scenes involving rape or abuse do not easily cause arousal in the reader. If they do, either the writer has failed, or the reader is a pervert.  Pat Conroy writes a horrific (but well-written) scene of rape in one of my favorite books of all times, The Prince of Tides. Afterwards, he addresses his readers with these words:

Rape is a crime against sleep and memory; it’s after image imprints itself like an irreversible negative from the camera obscure of dreams. Though their bodies would heal, their souls had sustained a damage beyond compensation.

On the other hand, scenes of love-making between two people who truly love each other should bring forth positive sexual responses in those reading the scenes.

So, I admit to having spent too much time researching for this blog post, including reading all about Salon’s “Good Sex Awards,” in which their writers agree that there aren’t many in literature. Why? Because it seems that good fiction writers prefer to leave more to the reader’s imagination. But occasionally a good writer comes up with a scene—or maybe just a phrase—that does it well, in my opinion.

I brought her up to me. And then my body, like a cathedral, broke out into ringing. The hunchback in the belfry had jumped and was swinging madly on the rope. 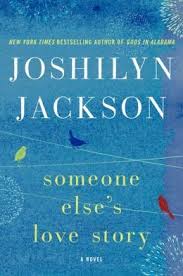 The last book I read in 2013, Joshilyn Jackson’s Someone Else’s Love Story, contains (at least) two kinds of sex scenes.  She doesn’t go overboard with description—again, leaving the reader to decide how to feel about each scene. I had planned to review Joshilyn’s book but then I found this review (from a bookseller who recently met Joshilyn), which says much of what I would say, so I’m going to share it instead. I hope you’ll read the book and discover those scenes for yourself!

Okay, that’s enough for my first post of 2014… who knew it would be about writing sex scenes? I’d love to hear from you on the subject: what are your favorite sex scenes in literature?

2 thoughts on “Writing on Wednesday: Getting Steamy on the Page with Beth Ann and Joshilyn”