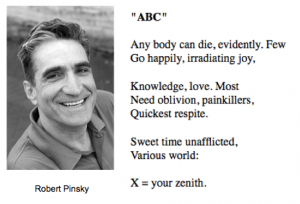 Lee Martin posted a fun writing exercise over at his blog on Monday. He calls it “Already Been Chewed: A Writing Exercise Using Facts.” I decided to give it a try for today’s post. As usual, I broke some of his “rules” but followed the general idea. Lots of fun and a good way to get your creative juices (and memory!) flowing. Lee got the idea from an essay by Dinty Moore, in which he followed an ancient form of poetry, the abecedarian, in which the first line or stanza begins with the first letter of the alphabet and is followed by the successive letter until the final letter is reached. (Check out Robert Pinsky’s famous abecedarian poem, “ABC,” above, right. Isn’t it amazing?) Here are Lee’s instructions (in italics) and my answers, followed by the beginning of my own (rough draft) abecedarian.

1. Who was one of your favorite childhood characters from TV, film, cartoons, comics, computer games, etc.? Angela Cartwright.

2.  Choose a famous person that you so associate with something about the personality of your favorite childhood character.  Barbara Hershey.

3.  Think of someone from your life, either present or past, who is contrary to the personality of your favorite childhood character. Well, I already did that with Barbara Hershey. But someone from my own life? (whose name starts with the letter C?) Carol. (Last name not disclosed, to protect the guilty.)

4.  Come up with an animal that you associate with the personality of your favorite childhood character. Dove. Angela was so graceful and pure in all the characters she played, which is why I think of a dove to represent her.

5.  Come up with an animal that you believe is contrary to the personality of your favorite childhood character. I chose the eel because they are so dark and slimy and shadowy. Nothing that I’d associate with Angela Cartwright or her characters.

6.  Recall at least one personal experience that’s suggested by your consideration of the previous items on your list. When I was in junior high school in Jackson, Mississippi, a new friend (she had come from a different elementary school) tried out for a part in a nearby high school’s production of “The Sound of Music,” and got it! I was soooo jealous. I remember sitting in the auditorium watching her on stage and thinking, “I could be on that stage.” And I was. Three years later I had a role in “Our Town,” on that very stage. No singing was involved.

7.  Write your title: Son/Daughter of (Your Favorite Childhood Character): A Meditation on (leave this blank for now)

8.  Begin with your favorite childhood character. Use a subject heading such as Atom Ant, or if you prefer, Ant, Atom. Write a few lines giving us some facts about that character. Feel free to do some research if you’d like.

9. Move on to each of the other items on your list, giving each a subject heading. Please note that the heading doesn’t have to be the name of the person or the animal you’re considering. Dinty has a section in his essay, for example, called Inheritance. Find more facts, whether from inside or outside your life. Go in whatever order your instinct tells you to go, knowing re-arrangement is always possible later.

10.  Now that you’ve gathered your facts, go back to your title and fill in the subtitle A Meditation on. . .

I didn’t do the entire alphabet, as Dinty did in his terrific essay. But here’s mine, as far as I got:

Daughter of Angela Cartwright: A Meditation on Shadows

Played Brigitta in “The Sound of Music” (47 years ago) and also Penny Robinson in the TV series, “Lost in Space.” But I fell in love with her originally in 1956 (I was 5 years old and she was only 4) when she played Linda in the Danny Thomas TV series, “Make Room for Daddy.” I thought Angela was an ANGEL, and I wanted to be her. I love this picture of her singing with her screen daddy. My daddy and I also sang together. And danced together. But not on the stage. I always wished we had.

Barbara came along just as I was beginning to outgrow Angela Cartwright. Her appearance in “Last Summer” in 1969 coincided with my graduation from high school, an emotional time in my life. I’m breaking the rules already, because unlike Angela, Barbara was feisty, irreverent., kind of dark. Watch these scenes from “Last Summer.” “Sweet Old Bird,” and “You’ve Traumatized Him.” Fast forward to 1988, when she co-starred with Bette Midler in “Beaches,” the same year I moved away from my hometown for the first time, leaving my best friend. (We watched “Beaches” together and argued about who got to be Barbara and who was Bette. We also cried a lot.) And then in 2010 Barbara traumatized her daughter, played by Natalie Portman, in the psychological thriller, “Black Swan.” I’m drawn to her darkness.  I like shadows.

Carol was my best friend in 6th grade. Unlike angelic ANGELA, Carol got me into trouble. More than once. One time involved boys. Another time involved shaving our legs for the first time. At her house. Without our mothers’ permission. But Carol was my partner in crime. She and I were the only girls in our sixth grade who had boyfriends. So, Peggy, who was the most popular girl in our grade, started the “Anti-Susan-and-Carol-Club.” For several weeks, none of the other girls would sit with us at lunch. But we didn’t mind too much ‘cause we had the boys.

In the Old Testament, after the flood, a dove returns to Noah with a freshly plucked olive leaf. The New Teastament compares the Spirit of God to a dove, saying that it “hovered over the face of the waters like a dove.” And it was a dove that descended on Jesus during his baptism. In the earliest Christian art, the dove represented the peace of the soul. The Doves are also an English indie rock band. Gotta love Google.

Most eels are predators. And they are nocturnal. Night creatures who bury in to the sand and mud. Eel blood is toxic to humans. But both cooking and the digestive process destroy the toxic protein. The toxin derived from eel blood serum was used by Charles Richet in his Nobel Prize-winning research which discovered anaphylaxis (by injecting it into dogs and observing the effect). Good things often come from the shadows.

Grovers Corners, New Hampshire, is the fictional hamlet which serves as the setting for Thornton Wilder’s Pulitzer-Prize-Winning play, “Our Town.” Wilder’s principal message in Our Town was that people should appreciate the details and interactions of everyday life while they live them. My favorite scene, which I shared with my brother, Mike, who played my on-stage older brother, George Gibbs in the play, happened atop a ladder, which served as the minimalist stage prop to show us looking out my bedroom window, at the stars one night. Rebecca ponders the position of Grover’s Corners within the vastness of the universe, which she believes is contained within “the Mind of God.” Night has fallen on Grover’s Corners, and the first act comes to an end. In 1946, the Soviet Union prevented a production of Our Town in the Russian sector of occupied Berlin “on the grounds that the drama is too depressing and could inspire a German suicide wave.”

“South Pacific” was my first favorite musical (before “The Sound of Music”). I memorized every song on the soundtrack. My favorite was “Happy Talk,” which was sung by Bloody Mary to the American lieutenant Joe Cable, about having a happy life, after he begins romancing her daughter Liat. Liat performs the song with hand gestures as Mary sings, because she can’t speak English. This type of communication was known as pidgin. As a ten-year-old, I did all those hand gestures while I sang the song, having no idea of the racial implications, either in the song, or in the relationship between the movie’s stars. “Happy Talk” is occasionally cut from productions of South Pacific on the grounds that the song is racist, citing the fake pidgin in which it is written. Ten years later (in the early 1970s) my brother (while in the Marines) would father a child in the Philippines and wouldn’t bring his Filipino lover and their child to the States, fearing that they wouldn’t be accepted in American society. The child died. Fifteen years later we adopted our first Asian child. We now have two adopted Korean children, and three beautiful bi-racial grandchildren. I wonder what they will think of South Pacific when they are old enough to watch it.

Remember how Peter lost his shadow and Wendy sewed it back on for him? Peter needed his shadow so he could continue to lead those Lost Boys on their adventures. Our youngest son, Jason, was one of those Lost Boys in the Playhouse on the Square (Memphis) production of Peter Pan in 1992. He was in fourth grade. I loved watching him do cartwheels across the stage and sing and dance with the other Lost Boys. It was midtown Memphis and so the cast was multi-cultural. Otherwise, I’m not sure a cute little Asian boy would have gotten the part. A couple of years earlier, he got a part as one of the children in the Broadway touring production of “The King and I” at the Orpheum Theater. He was the only kid who didn’t need makeup to look Oriental in that one. And yes, I lived vicariously as a stage mom during all of those shows. Stacy Keech was the King and Mary Beth Peil played Anna. There was a Korean woman who was a dancer and befriended Jason. We had drinks with her one night after the show. But I guess that has nothing to do with Peter Pan’s shadow.

I’m stopping with the letter “P” since this is just a writing exercise (first draft) and not something I plan to publish. But I must admit I’m intrigued with the abecedarian essay now. I might give it a more serious effort in the future.

Before I close today, I’d just like to share some fun news. My blog, Pen and Palette, was just named as one of the “Top 25 Reading and Writing Resources for English Buffs” by mastersinenglish.org. When you click on the link, scroll down to Number 8 in the list (it’s in categories, and my blog is in the “writing” category). I’m honored that Pen and Palette has been chosen as one of 13 blogs about writing. (Although my blog is also about mental health and faith.) Elizabeth, who works for the Masters in English organization, said this about why my blog was chosen:

“I know what gave your site my vote specifically was reading this post you wrote: https://susancushman.com/writing-on-wednesdays-blurring-the-lines-between-literary-and-commercial-fiction-and-nonfiction-entertainment-and-art/ How you discussed the blurred lines between genres and your goal of writing “kick-ass, artistic fiction” was incredibly insightful. I felt that any English student or aspiring writer should definitely know about a site with posts like that one….hence your spot on our list.” 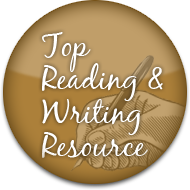 Thanks, Elizabeth! (I’m still trying to figure out how to post the badge on my site….)

Oh, and thanks, Lee, for the great writing exercise! Has anyone else ever written (or read) an abecedarian essay? I’d love to read more of these!