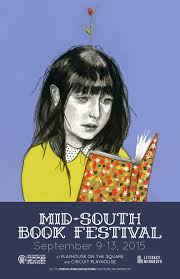 The second annual MidSouth Book Festival took place September 9-13 at Playhouse on the Square and Circuit Playhouse in midtown Memphis. There were also tents for vendors in the street, as well as food trucks and outdoor entertainment. I was able to get to four events, so here’s a quick review.

Friday Night’s “Well Read Reception” for presenters and festival-goers was sold out, with music by Memphis’s own Alexis Grace (and a terrific keyboard player), an open bar, and barbeque ribs, lamb sliders, and lobster mac and cheese. My husband and I especially enjoyed meeting Dennis Bryon of the Bee Gees, a delightfully personable, humble man.

Saturday morning I chose “Bill Clinton and the Bee Gees: Memoirs from the Spotlight,” moderated by Neil White, with Dennis Bryon and (Clinton diarist) Janis F. Kearney. What a great peek behind the scenes into these artists’ lives in the exciting  realms of politics and pop culture. I bought two of Kearney’s books and I’m already enjoying them. (And I bought Bryon’s book, You Should Be Dancing: My Life With the Bee Gees, as a birthday gift for my husband, but don’t tell him.)

Next up for me was “Challenging the Mythology of the Lady Writer,” with Beth Ann Fennelly, Sonja Livingston, and Kim McLarin. I’ve been friends with Beth Ann and Sonja for a while, and it was great to meet Kim, a former Memphian, writer for the New York Times, and now writer-in-residence at Emerson College in Boston. I can’t wait to read her book, Jump at the Sun. (I’ve already read most of Beth Ann and Sonja’s books!) This panel was rich with take-home wisdom for writers. A few snippets:

Marketing and book covers were discussed, and Beth Ann shared about their publisher wanting to put her husband’s name first on the cover of The Tilted World, a novel they wrote together, because his novel, Crooked Letter, Crooked Letter, was a New York Times bestseller. Although Beth Ann actually wrote more of the novel than Tom (and her last name comes first alphabetically) they agreed to the publisher’s choice. The cover of Kim’s hardback edition of Jump at the Sun features a white woman, although Kim and her characters are black. Again, a marketing move, since more book clubs would buy it with a white woman on the cover. Difficult decisions for these artists to make in order to get their books into the hands of more readers.

The final panel I attended on Saturday was “Family Ties: Writing About Loved Ones,” featuring Harrison Scott Key, Corey Mesler, and Dana Sachs, moderated by Ashley Bonds. Harrison is always entertaining, and Corey (owner of Burke’s Books, just down the street from the festival) is always riveting. I had not met Dana, but she did not disappoint.

So I give big kudos to all the presenters. My only complaint about the festival was the low attendance at the panels on Saturday. I didn’t take a head count, but my guess is that there were between twenty five and forty people at the panels I attended. And while the Friday night reception was sold out and well done, I pictured a much larger group. Just a few weeks ago 3,750 people attended the inaugural Mississippi Book Festival in Jackson. And the Southern Festival of Books in Nashville is always packed. I don’t know if Memphis just doesn’t consider itself a literary town or what, but I was disappointed in the turnout.

Thanks to the organizers and volunteers for their hard work. I had a terrific weekend and look forward to next year!