I love anthologies. Two of my dozen or so published essays appear in anthologies—“Chiaroscuro: Shimmer and Shadow,” in Circling Faith: Southern Women on Spirituality, and “Eat, Drink, Repeat,” in The Shoe Burnin’: Stories of Southern Soul. And I love it that both of these books have the word, “Southern,” in them. So, when I was asked to contribute an essay to a third Southern anthology, Southern Sin: True Stories of the Sultry South & Women Behaving Badly, (InFact Books, March, 2014) I was tempted. But I wasn’t ready to go public with my most colorful sins, so I passed on the offer. Turns out the editors received almost 600 entries for the anthology, so mine obviously wasn’t needed! Except for the fact that, as Dorothy Allison says in the Introduction,

I have to say, for a Southern anthology, this one is a little light on Gluttony.

I had already covered gluttony (and drunkenness) in spades in my essay for The Shoe Burnin’ anthology. And despite my husband’s protests that my blog posts are much too personal and confessional, I’m sure he’s grateful that I resisted the pull to submit a piece for this book.

Since I know both of the editors, three of the twenty-three contributors, and have met Allison, I’m going to share from these six introductions, notes, and essays, leaving twenty more entries untouched and waiting for you to explore on your own.

Dorothy Allison’s Introduction addresses the question many folks might be asking about the title of this book:

So what is specifically Southern about sin? Do we do it better, with greater abandon?

And Lee Gutkind (aka the Godfather of Creative Nonfiction) offers a few other considerations in his Editor’s Note:

But something about the South inspires a spontaneity that is contagious. Maybe it’s the heat and humidity, or the lilt with which Southerners speak or the alluring grit of Memphis and the moaning trombones of New Orleans, or the mist that rises at night above the Mississippi River Delta, or the sweet intoxication of Kentucky bourbon, or the topless beaches of Miami—or maybe it is all of these and much more that make the South so sultry.

Memphian Sonja Livingston puts her own personal spin on the historic tale of Alice Mitchell and Frederica Ward—two students at the Higbee School for Young Ladies in Memphis back in the 1800s. Their elicit relationship, attempt at marriage, and eventual murder (the suicide part was botched) of Fred by Alice was the talk of the town in 1890s Memphis. I don’t want to spoil the ending, so be sure and read Livingston’s essay, “Mad Love: The Ballad of Fred & Allie,” to learn what happened at Alice’s trial!

Sarah Einstein (Managing Editor at Brevity journal)’s essay, “Fat,” does a good job of addressing the sin of gluttony, describing an early relationship like this:

My friend, River Jordan, writes about four episodes of nakedness in her life, beginning with her first experience of skinny-dipping with her cousin in seventh grade and ending with a solo drive from Panama City to Taos, where she brazenly strips to her waist to feel the cool night air on the long, lonely journey. “Nude Study” is River’s nod to her Southern girl mores:

Taught from an early age to believe in Jesus, to take care of family, and to keep my clothes on. It was simple. There were two types of girls: good ones and whores. They were easy to distinguish because whores took their clothes off.

But it’s also her ode to innocence and shared humanity:

I swim, dive, flip, backstroke, and feel the sun on my chest, thinking, surely a feeling this good just can’t be bad…. Much to my surprise, I do not become a whore…. Being bad with a relative seems like less of a sin, as if we have taken naked and  divided it by two…. We become naturally human. 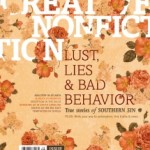 I can’t wait to read the other twenty essays. Such a great book to have by “my chair” in my office to pick up when I need a good story.