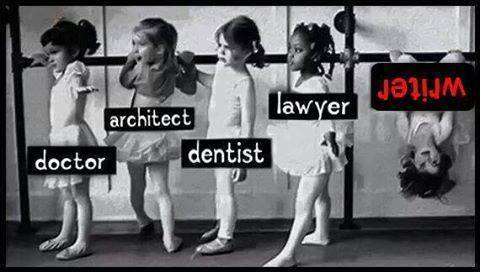 Last Wednesday I wrote about “Shaping the Chaos”—beginning (again) to work on my personal/spiritual memoir, Jesus Freaks, Belly Dancers and Nuns. As I said in my previous post, I’ve written a couple of versions of this memoir in the past—most recently in 2010.

Many of the treasures I shared last week from Why We Write About Ourselves were inspirational. Today I’m going to share something more practical. Something from the memoirist Meghan Daum in her essay in the book:

I see myself as a personal essayist more than a memoirist. I know that distinction may seem negligible, but it’s important to my work life and the way I go about conceiving projects.

To me, a personal essay is a piece in which I use my own experiences as a lens to look at larger, more universal issues and phenomena. It’s just an essay, not an entire book.

She had me with these words. Since my “failed” attempts at writing book-length memoir (although I completed two of them, but don’t believe they are publishable), I’ve published 8-10 essays and two poems that each contain a taste of what was in those book-length memoirs. Some of these essays are in anthologies, others in journals and magazines (online and print). There was something about the smaller form—the essay—that worked better for me, too. As Daum continues:

It’s just an essay, not an entire book. I guess it’s the journalist in me, but when working in the first person I like the idea of writing a set of discrete pieces rather than a whole book. It’s just more manageable for me.

Yes. Definitely more manageable. I’ve just put together a working outline for my memoir—which I now realize will be a collection of essays—and here’s what I’ve got to work with:

126 pages of material (a good start) including:

I’ll fill in the blanks with more new material and excerpts from blog posts from 2007-2016.  It feels great to be organizing the materials in this way instead of writing a book with one continuous narrative arc. Daum felt the same way:

My last collection of essays, The Unspeakable, was composed entirely of essays that hadn’t been published elsewhere before. The pieces were written for that book and meant to be in the company of one another. Some people asked me why I didn’t just write a straight-through book addressing the ideas that run through the essays…. Ultimately it seemed right to do them as individual pieces. They each have their own unique arc and structure and tone, which is intended to take the focus away from Meghan, the narrator, and direct it toward something broader and more interesting.

Thank you, Meghan Daum. I was feeling this way about my memoir, but wondering if I was just being lazy. And maybe that’s part of it, but I resonate strongly with Ms. Daum’s reasoning here. And so I press on with this format.

One other contributor to Why We Write About Ourselves wrote about this same approach to memoir. Ayelet Waldman says:

I never decided to write a memoir…. Once I started working on it, I looked back at my previously published work and realized that not only was this all of a piece, but that the various pieces, along with the new material I was generating, constituted a memoir.

I hope that my materials also constitute a memoir. Stay tuned. And thanks, always, for reading. 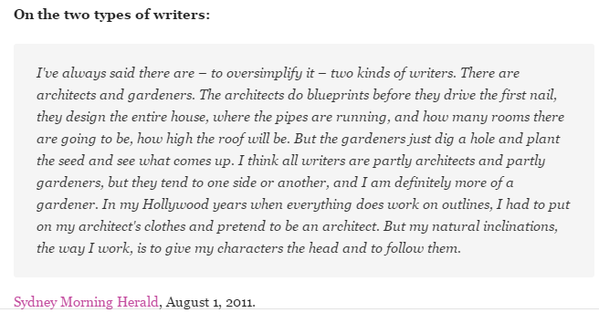 Oh and for those who follow the logic that there are two types of writers… I’m definitely an architect, not a gardener.