Two weeks ago I published my post in the authors’ blog hop, “The Next Big Thing.” Then I tagged four writers, who published their posts last Wednesday. Today I’m following their trails (which you can do from the links I posted last Wednesday) and it’s so much fun. I’ll just share one of the posts on the hop today.

NancyKay Wessman tagged Susan Marquez, who blogged about her work-in-progress, “You Can’t Stop This Dancer,” or “Every Step of the Way.” It’s about her daughter, Nicole, who fell six stories from her New York City apartment and is now walking and giving inspirational talks about it. I can’t wait for Susan to finish this book and get it published. 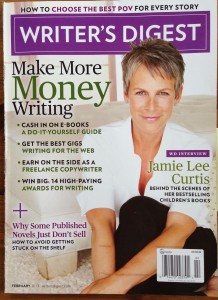 And speaking of getting published…. Here I am, having queried 41 agents and received rejections from 11 so far. I began the query process back in October, and was so hopeful of having an agent by now. I do have to keep reminding myself about Katherine Stockett’s story… how it took her 3 years to get an agent, and how she was rejected by 60 agents along the way. And so I keep at it, continuing to query 2-3 more agents each week, keeping a submissions record and following up in a timely manner when I haven’t heard anything.

Last month’s issue of Writer’s Digest has a column by literary agent, Barbara Poelle (with Irene Goodman—one of the agents who didn’t respond to my query back in October). Poelle’s column, “Funny You Should Ask,” has letters from readers asking questions about the publishing process, with answers from Poelle. One of the letters sounds like I could have written it:

When I started querying agents for my novel, I got several requests for full and partial manuscripts. The feedback I received was positive, though the novel was eventually rejected by all but three of them, who did not reply. After several months, I followed up with an email to those three (who had two full and one partial). One responded within a couple weeks with another rejection, but lots of praise. I’ve not heard from the other two.

My question is: How much prodding and/or follow-up should I do? Should I re-query these same agents, or just move on to the next group? My fear is that the manuscript went to an intern who is no longer at the company. Not only would the manuscript be buried in a slush pile, but the slush pile of a nonexistent person. What do you advise?

Congratulations: The fact that you’re getting requests for partials and fulls means, at the very least, that you have something in the foundation of your work (such as good timing or an intriguing plot) that appeals to your target agents, so that is half the battle. Following up by sending a nudge six to eight weeks later? Right again! You have absolutely done your part to get the manuscript in front of agents who could be a fit. So, if someone misses the banquet of brilliance you have served them, that is their fork to stab themselves in the face with. (You’ll notice my own tine scars here and there.)

In this case, send one more nudge to the silent folks, just to satisfy that itch, but then get your query out to another 15 agents—and then, drop and give me another 1,000 words on your work-in-progress. Just as today’s interns are tomorrow’s agents, today’s WIP could be tomorrow’s meal ticket (fork not included).

I’m already doing exactly what Poelle suggests—I started another novel in February and I’m continuing to work on it (while polishing an essay for an anthology) as I follow-up with silent agents and query new ones. What more can I do? Hmmmm….. maybe I’ll re-query the Goodman Agency, but this time, I’ll send my query to Barbara Poelle. (Irene Goodman’s interns just might have disappeared, right?) Here goes….

2 thoughts on “Writing on Wednesday: The Next Big Thing and Querying Agents, continued”