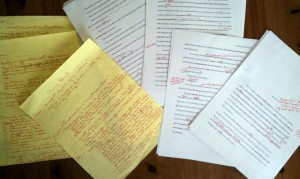 I’m working with a freelance editor to polish my novel before querying literary agents. She’s a terrific editor, and came highly recommended by several successful published authors. Every single page of the manuscript is filled with red marks and words. Many of her edits/suggestions are just “line editing,” and it’s not too difficult to work through that part—just labor-intensive, time-consuming and boring.

It’s the pages and pages of hand-written notes that are so difficult to handle. These notes (and our discussions when we’ve met in person, twice) suggest major changes in parts of the novel. It’s been three months since I began this process with her, and yesterday I think I hit the wall, like marathoners often do at about mile 23. For athletes, this “bonking” is caused by the depletion of glycogen stores in the liver and muscles. My father ran many marathons, including Boston and New York several times, and I remember him talking about fellow runners who hit the wall during races. 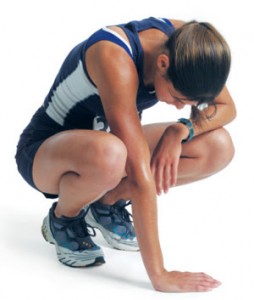 So how is bonking different for a writer than for a marathon runner? Writing a book is definitely a marathon. Metaphorically, I’m at about mile 23 (of 26.21875 miles.) Close to 90% finished. The drafting and early revisions took two years. (I know some writers who took ten years for this process. I don’t think I have their patience!) During those two years, several chapters of my novel were critiqued at writing workshops (by other students and also the faculty) and critique groups and partners. I thought I had learned how to hold onto myself during the process—to reject suggestions when they didn’t seem right to me. And to be sure that I didn’t lose myself—and my style, my voice—by making changes suggested by others when I wasn’t sure that’s where I wanted to go with the writing.

But today I felt my self-confidence waning. Exhaustion setting in. I just wanted to quit. And eat grape popsicles. And so I decided to see what some writers I admire have to say about working with editors. The first piece I found was so good, I decided to just share this one story, about an author I admire greatly, Haven Kimmel. I did an interview with Haven, which you can read here. And a post about meeting Haven at her reading at Square Books in Oxford, Mississippi, here.

This story is about Haven’s experience working with an editor, Amy Scheibe, on her first novel, The Solace of Leaving Early (after successfully publishing two memoirs.) Haven is talking about working with the editor at her publishing house, after she has the book deal, which is a somewhat different experience than working with a freelance editor pre-sale. But I think there are also some parallels I can learn from her. In this article by Matthew Gallaway in The AWL (December 13, 2010), Haven talks about how she responded to Amy’s suggestions after reading her manuscript:

“Her editorial letter was thirteen single-spaced pages, and each point was cross-referenced on the manuscript with a colored Post-it note. I was to revise two first-person alternating POVs into close-third, meaning that the interior voices (so necessary to the sweetly damaged, or the unreliable narrator!) would be gone, and all of that would have to be conveyed through prose alone. And the ending had to be the opposite of the way I’d written it. And one character had to be amplified, but she didn’t say how, and she had gone through paragraph by paragraph and marked those that had gone on a beat two long and those that needed one, two, or three beats more, which—HELLO—you tell me what that means. The beats: they were to my cranium. My response was to lie down on the sofa in my study and stare at the ceiling for nearly a month, until my husband called my dear friend Lawrence Naumoff, a southern writer of unmatched depth and overall talent who was about as sucker-punched by New York publishing as anyone I can name. He said, ‘Put her on the phone.’ During the month of my suffering I had become wispy and vague and tubercular. I tried to say hello but was too precious. Lawrence said, in his superfine accent, ‘Well, what you have to decide is if you’re a real writer or not, and if you’re a real writer you’ll stand up and get something to eat, then sit down at your desk and start at the first word and retype the entire thing—no cutting and pasting—and you will do every last thing your editor tells you to do, and you will not argue or protect your darlings, and in fact you will never again protect a darling, or think being edited is a violence. Okay?’ I blinked, said, ‘Gotcha.’ And that’s what I did. And Amy was right on every point.” 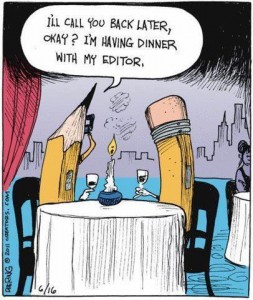 Wow. Now I’m wondering if working with a freelance editor is just a warm-up for working with a publisher’s editor later. Either way, the message is clear: I have to decide if I’m a real writer or not.

Marathon runners learn to refuel along the way, because for them, once you bonk, it’s too late. Hopefully the marathon of novel-writing is more forgiving. I might take a day or two off to re-fuel, but then, I’m definitely getting back in the saddle.

22 thoughts on “Writing on Wednesdays: Bonking”