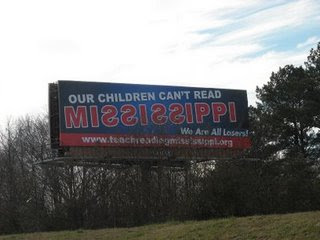 Every time I drive down I-55 from Memphis to Jackson to visit my mother, I am bothered by this billboard just north of Jackson that says, “Our Children Can’t Read—We Are All Losers.” I keep meaning to take a picture of it, but I’ve never taken the time to stop and get out of the car on the interstate to snap it. So, I Googled it today and found this photo on a blog written by folks who researched the source of the billboard and discovered that it was “the result of a citizen group from Tupelo, MS that is advocating use of the Orton-Gillingham method of instruction, a method of teaching reading to dyslexic students that has been in use in some form since the 1930s. So, this billboard is arguing that reading levels are so bad in MS, that a special-needs-student approach is warranted, generally.” Now I’m not an educator and I have no idea whether or not this method would be a helpful approach for students who are struggling with reading, but that’s not the point. The point is the billboard is offensive.

So, on Thursday when I was driving from Jackson (where I visited Mom) to Oxford for a writing class, I saw the billboard again—this time along Highway 6 from the interstate to the Ole Miss Campus. The image is just disturbing. I grew up in Mississippi, and whether or not the state is having education issues, it’s just wrong to advertise your problems on a billboard for all the world to see! Every time I see that billboard, I think about a really positive advertisement I saw for Mississippi a while back—at the first Mississippi Writers Guild Conference in Clinton in August of 2007. And yesterday I found the same ad in the June issue of Desoto Magazine—the issue that contains my friend, Herman King’s essay, “Southern Intrusions,” and another friend, Karen Mayer’s book review of In the Sanctuary of Outcasts, by Neil White. The ad campaign highlights many of Mississippi’s strengths, but the one I want to focus on here is this one:

“Yes, we can read. A few of us can even write.” And there are photos of 14 famous writers, all from Mississippi. (Click on the ad to read all the names in small print.) 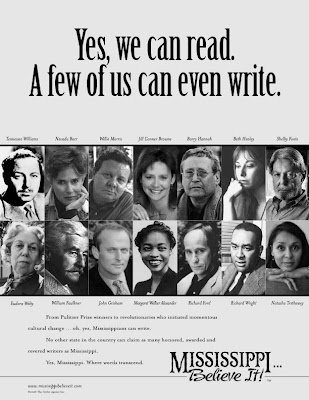 One of those writers is Barry Hannah, Pulitzer Prize nominee and long time Writer-in-Residence at Ole Miss. A couple of my writing group buddies took Barry’s creative writing class this past semester, and one of them let me know about a series of Thursday afternoon workshops he’s offering this summer. Although I don’t usually write fiction, I whipped off a short story, “Holy Water,” and made copies for the group to critique during the workshop yesterday, and it was well worth the time! It was a small group that included Barry, Jack Pendarvis (author and Oxford resident), Elizabeth Kaiser, who studies with Barry and teaches in the MFA program, and Doug McLain, Herman King and me, all three of us from the Yoknapatawpha Writers Group. We actually split our time between the Blind Pig and the upstairs bar at City Grocery, which doesn’t open until 4 and the workshop started at 3:30. (They’re still working out the logistics.)

Okay, my excuse for the poor quality of my workshop writing sample is that I stayed up until 2:30 a.m. the night before the workshop writing my story (‘cause I didn’t know I could go for just one class until that day—if you want to get in on any of the next 3 classes, let me know and I’ll put you in touch with Barry’s “people”) but truthfully, Barry’s comments pointed out flaws which I can see are patterns in much of my writing, like this one:

Be more concrete—like O’Connor and Hemingway.

I tend to be too vague, often because I’m writing memoir and I’m not clear yet how much I want to reveal about certain things. It’s interesting to me that Barry wrote across the top of my story, “This is a narrative essay.” It was really a fiction story, but evidently my essay style came through. When Barry added that it’s okay to be less concrete and more reflective when writing nonfiction, I was relieved. (And he said I can bring an essay rather than a fiction story for the next class! Yea!)

Both Barry and Jack felt my main character in “Holy Water” (a teenage girl who is looking for the heights of pleasure in religious experiences and sex) was too unrealistic in her expectations. Barry said, “Life is messy. You’ll never get what you need.”

Of course I argued with him: “But you can’t really expect women to accept that!”

He felt that my story was too melodramatic, too forced. I got his point, but let me just say there was a lot of testosterone in the room when the critiquing was going on!

Several of Barry and Jack’s comments were helpful to all three of us who submitted writing samples:

“Don’t use an adjective that’s not surgically precise.”

“Find the heart of the story and make sure everything drives towards it. Cut the rest and save it for another story.”

“Don’t force Southern culture in your writing or it will become cliche. Believing you have automatic charm because you’re a Southern writer is a huge mistake. As Flannery O’Connor said, ‘you can never be too regionalist, but you can be too local color.’”

There were lots of great specifics offered about each of our writing samples, and I’m sure we’ll all be back! I can’t go next Thursday, but plan to return on July 2… with an essay in hand next time! Remember, if you’d like to go, send me an email and I’ll get you in touch with Barry’s people! Meanwhile, have a great weekend!