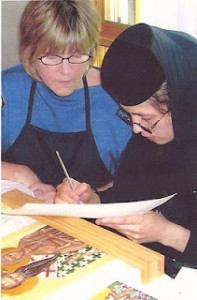 I’m putting together a collection of personal essays with the working title, Pilgrim Interrupted. Many of the essays have been previously published, and as I’ve been going through them again, I’ve pulled out a few representative quotes. I’ll share them here, as teasers for what I hope will become my next book. (I’m querying literary agents for this one.) The essays are grouped into six sections: “Icons, Orthodoxy, and Spirituality,” “Writing, Editing, and Publishing,” “Alzheimer’s, Caregiving, Death, and Dying,” “Family and Adoption,” “Place,” and “Mental Health, Addiction, and Sexual Abuse.”

Thirty essays. Four poems. Numerous icons and other pieces of original art. I hope there’s something here for everyone to reflect on, and that my readers will find some measure of joy or inspiration from the journeys I’ve shared. My pilgrimage—mostly in the “Christ-haunted South”—has definitely been interrupted over the decades of my life, but hopefully the prose, poetry, and art that litter the pathway are of some value.

Here are some samples:

“Maybe my brokenness, like the egg yolks that I use to make tempera paint for my icons—themselves a form of life interrupted—is part of my offering to God.”—Susan Cushman, from “Chiaroscuro: Shimmer and Shadow” (published in Circling Faith: Southern Women on Spirituality, University of Alabama Press, 2012)

“Sometimes I stop and look at the unfinished images with a melancholy longing. The other day I paused before the icon of Christ, fingering a soft sable brush and scanning the jars of pigments on the nearby shelves. There are eggs in the refrigerator, waiting to be broken for Him. Their yolks, themselves a type of life interrupted, are ready to bind the dry pigments and fill my palette with a range of ochres and siennas for the face of Christ. Everything I need is here, waiting for my touch.”—Susan Cushman, from “Blocked” (published in the Santa Fe Writers Project, literary awards finalist, July 2, 2008)

“Sobriety—it’s about more than not being drunk. It’s clear-eyed brush strokes and poetry that knocks your socks off and page-turning prose. It’s Iris Dement singing, “I choose to take my sorrow straight,” and Natalie Maines (of the Dixie Chicks) turning a personal affront into a hit song with, “I’m Not Ready to Make Nice.” It’s Mary Chapin Carpenter singing, “forgiveness doesn’t come with a debt.”  But it’s also allowing yourself to be human, and turning that broken humanity into something redemptive with every stroke of your pen or brush or keyboard.”—Susan Cushman, from “Blocked” (published in the Santa Fe Writers Project, literary awards finalist, July 2, 2008)

“The distinctive chug chug chug of the wine filling the glass. It’s not really a cork—it’s a rubber wine stopper (from Rabbit) and its phallic shape and texture is tempting. I place it in my mouth and suck the last drops of wine from its surface as I slowly pull it away and push it back into the bottle. The first swallow is always the best, bringing instant gratification, holding promises of relief, of edges softening, jaws relaxing, mind slowing down, dark clouds abating. And sometimes it makes good on those promises, but the relief is only temporary.”—Susan Cushman, from “Eat, Drink, Repeat: One Woman’s Three-Day- Search for Everything,” published in The Shoe Burnin’: Stories of Southern Soul (Rivers Edge Media, 2015)

“After binging all day on chips and grilled cheese and sausage biscuit and wine, the self-hatred drives me to my knees once again. But not in prayer. My reflection in the bottom of the toilet bowl—and a fetid memory long ago encoded in my frontal lobe—are enough to trigger my seasoned gag reflex. This ritual takes less than a minute. I puke up most of what I’ve eaten in the past couple of hours. It brings relief, but not without more self-loathing. I cannot, as James Baldwin urged, “vomit the anguish up.”—Susan Cushman, from “Eat, Drink, Repeat: One Woman’s Three-Day- Search for Everything,” published in The Shoe Burnin’: Stories of Southern Soul (Rivers Edge Media, 2015)

“It was surreal— like an invasion of the profane into the sacred— and it continued for about forty-five minutes. They would enter to the right of us, in their khaki shorts, fanny packs, and white Keds and cameras (which weren’t allowed inside the cave) and move slowly along the wall where Saint John had once sat, dictating to his scribe, Prochorus. The tour guide alternately pointed to the hole in the wall where the disciple pulled himself up after sitting for hours on end, and the crack in the ceiling where he heard the voice of God. Their mouths formed large, silent “O”s as they crept along, nodding at one another. Then the guide would wave the tourists through the tiny chapel, and they would walk in front of us as they exited.”—from “Pilgrim Interrupted” by Susan Cushman