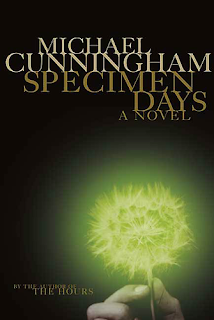 My recently completed novel manuscript, Cherry Bomb, was inspired somewhat by Michael Cunningham’s 1998 Pulitzer-Prize-Winning book, The Hours. I’m fascinated by the way he weaves the lives of three women—one historical and two fictional—from three time periods and geographic locations into a brilliant story line.
In 2005 Cunningham published Specimen Days, in which the main characters find themselves in three different sub-plots in the past, present and future. Here’s an interesting interview where Cunningham discusses his reasons for using this unique structure.
I picked up a copy of Specimen Days at The Tattered Coverbook store in downtown Denver a few weeks ago, and I was interested to see an Author’s Note in the front of the novel. Cunningham uses the note to explain a bit about the book’s structure and historical foundation to the reader, including these words:
“Biographers and historians may be required to account for all those missed trains, canceled engagements, and long periods of lassitude; the fiction writer is not necessarily so constrained. Novelists must usually decide what degree of slavish accuracy would make their stories more alive, and what degree would make them less.”
This is so helpful to me as I’m about to begin my final round of revisions of my novel. I’ve struggled with questions of historical accuracy as I’ve fictionalized the lives of several historic people and intertwined them with totally fictitious characters. I’ve done a good bit of research to make each scene believable—whether it’s about a 1980s MTV video of Blondie and Fab 5 Freddy, graffiti writers, or the life of a fourth century prostitute in Alexandria, Egypt.
As Cunningham continues in his Author’s Note for Specimen Days, “It’s semi-accurate. To the best of my ability, I’ve been true to historic particulars in the scenes I’ve set in the past. But it would be a mistake on the reader’s part to accept any of it as literal fact. I’ve taken especial liberty with chronology and have juxtaposed events, people, buildings, and monuments that may in fact have been separated by twenty years or more.”
I’m wondering why Cunningham found it necessary to write this Author’s Note for Specimen Days. He wrote no such note for The Hours. Shouldn’t our writing be clear enough without us having to explain it on the front end? Don’t get me wrong, I’m not criticizing him (he won the Pulitzer, remember?) but rather wondering whether my novel should also have an Author’s Note at the beginning….
Please share!