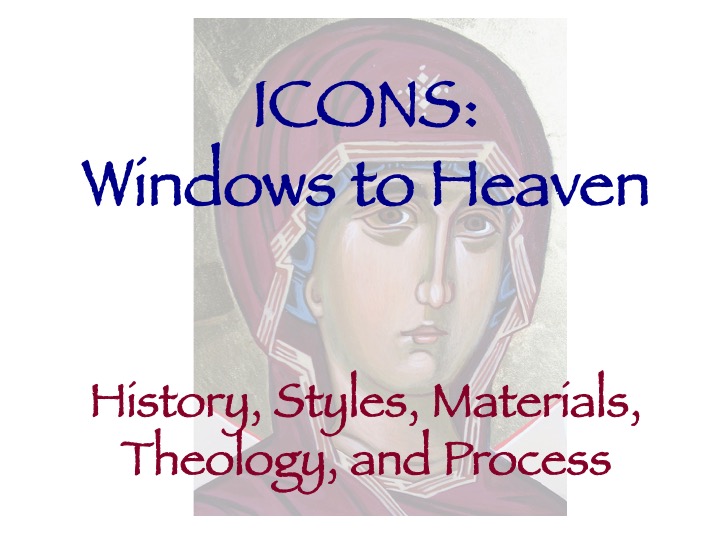 This past Wednesday I gave my slide show presentation, “Icons: Windows to Heaven,” at St. John Orthodox Church, my parish here in Memphis. The slide show is only partly about my book PILGRIM INTERRUPTED, and mostly about icons. This was my fourth time to give the presentation, but I was still nervous. For one thing, I was giving the presentation in person AND on Zoom at the same time, for the first time. And I knew there were lots of people in the audience who were very educated about our Orthodox faith and I was a little insecure. But the presentation seemed to go well. And then I got to the end and said those scary words: “Does anyone have any questions?”

There had been questions at each of the other presentations I had given, two in person and one on Zoom. And there was always at least one question I didn’t know the answer to. I wish I had written them all down, but now I’m going from memory and trying to share what I’ve learned by researching the questions. 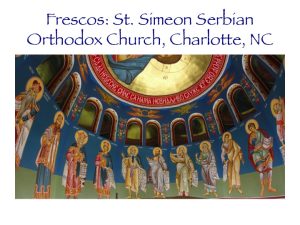 The first question during my talk at St. John came from my husband (of course): “What kind of paint is used in painting the frescoes?” I had explained about the egg tempera and acrylics that are used in icons painted on canvas or boards covered with linen cloth and gesso. But I had no idea what kind of paint was used when the icons are painted into wet plaster, directly on the walls. So I said I didn’t know. A little while later, my husband—who had Googled the question (of course) read us what he learned. Here’s a snippet:

In frescoes, water-based pigments (without egg yolk) are painted on fresh plaster while it is wet, usually on wall surfaces. The colors, which are made by grinding dry-powder pigments in pure water, dry and set with the plaster to become a permanent part of the wall. Plaster, sand, lime, and sometimes marble dust are used, which bind with the pigments.

The image is of some of the frescoes at St. Simeon Serbian Orthodox Church in Charlotte, North Carolina. 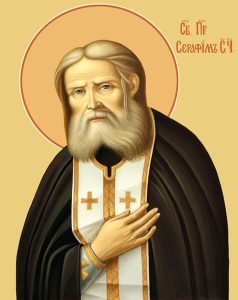 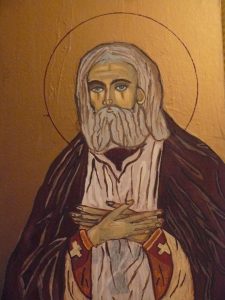 Here’s another question someone asked: “Why are the saints’ eyes always brown in icons?” And quickly another parishioner commented, “Except for St. Seraphim, whose eyes are always blue in icons.” Which is true. Our pastor, Fr. Phillip Rogers, suggested that the eye color (and I mentioned also hair color) is always the same because icons aren’t realistic paintings. We aren’t meant to recognize the saint in the icon because of his/her eye (or hair) color. But I became curious about why St. Seraphim alone has blue eyes, which I knew, because I had written an icon of him. And I had helped a young (14-year-old) parishioner paint an icon of St. Seraphim, which is shown at right. So I did a little research. Here’s something I found from an encounter someone had with Seraphim when he was asked if a portrait of him could be painted:

Who am I, a wretched man, that my portrait should be painted? It is good to depict the faces of God and the saints, but we are men, and sinful men,” the Elder said; and only giving in to the enthusiasm of those who held him in honor, did he permit several faithful depictions of himself to be made. Among these is the remarkable image of the saint here described, which portrays him full figure, as a stoop- shouldered elder in his declining years, clad in a leather half-mantle and cowl, girded about, as was his habit, with a white towel. The wonderful visage of the saint remained totally unaffected by time. On the pale face of the holy one, emaciated by his ascetic struggles, framed by graying hair and a similar beard, the blue, amazingly penetrating eyes of the elder look out at us. It is impossible to tear oneself away from this gaze.

One thing I thought as I read this is that this is a saint who was alive when his portrait was painted. And after he died, perhaps the iconographer had seen him in person, and was struck by his blue eyes, and wanted to remain true to his likeness. The icon above at left is a bit more realistic than most. 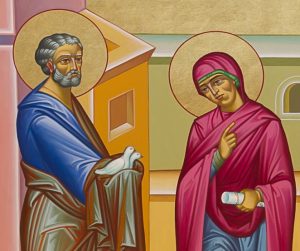 One question asked during a Zoom presentation was this: “Why are there no doves in icons?” My answer was that there ARE doves in icons! One example is in the icon of John the Baptist baptizing Christ in the River Jordan, (right)in which the dove represents the Holy Spirit. When He had been baptized, Jesus came up immediately from the water; and behold, the heavens were opened to Him, and He saw the Spirit of God descending like a dove and alighting upon Him. And suddenly a voice came from heaven, saying, “This is My beloved Son, in whom I am well pleased.” (Matthew 3:13-17)

Another example, less symbolic and more actual, is of St. Joseph offering two doves in the temple (above left) along with the prophetess Anna. My understanding is that these were actual doves. 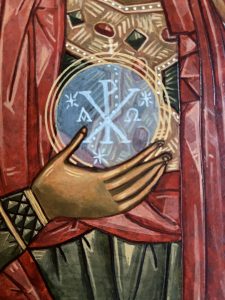 Icons of some angels, like this one of Archangel Gabriel at right (the first icon I wrote), show the angel holding an orb. Some icons of the Archangel Michael (or the Archangel Gabriel) show the angel holding an orb in one hand and a staff in the other. Inside the orb are often the superimposed Greek letters X P. The “Chi Rho” symbol for Jesus Christ. Thus the orb carried by the archangel belongs to Christ and represents the kingdom of the enthroned Divine King.

In icons of the Guardian Angel (like this one, at left) which is similar to the one I wrote for my Goddaughter, Sophie, but I can’t find a picture of it right now, the angel is holding an orb that represents the soul of the Godchild. 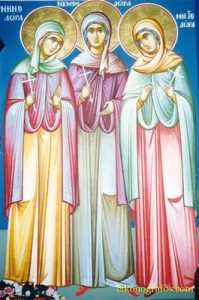 Saints that appear holding crosses in their hand are often martyrs, and the cross is the symbol of their martyrdom, as in this icon at left of the martyrs Menodora, Metrodora, and Nymphodora.

There are, of course, many other symbols used in iconography, but here I am mainly addressing items that were asked about in the Q & A following several of my presentations of “Icons: Windows to Heaven.” I’m so thankful for these questions which have encouraged me to do more research and learn more about icons!