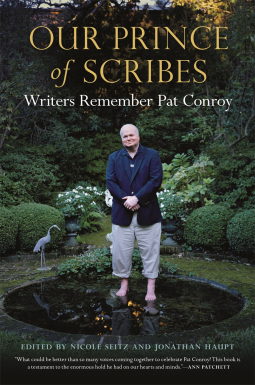 On Sunday I finished reading a wonderful new book, Our Prince of Scribes: Writers Remember Pat Conroy (University of Georgia Press, September 2018).  Edited by Nicole Seitz and Jonathan Haupt, it’s a beautiful collection of reflections on the life and work of my favorite author, who is obviously a favorite with many others. When I heard about the collection, it had already gone to press. And although I didn’t know Pat as well as many of those who contributed essays to this book, I wished I could have joined them. So I will share my own reflections here, at the end of this post. But first I’ll share a few of my favorite quotes from contributing authors. I tagged about 25 “favorites,” but I’ll only share a little over half of them here. I hope these quotes will tease you into buying the book and reading these wonderful essays!

“They connected with Pat through the love of words or food, or through the shared sufferings of childhood or existential questioning”—Nicole Seitz, Editor

“Because of the abuses of his childhood, Pat found it impossible to foster sustained joy in his own success, but he could experience tremendous vicarious bliss in the success of others. Serving as the sage tribal elder in the mentoring of other writers brought Pat a happiness that even international literary fame could not.”—Jonathan Haupt, Editor

“Pat didn’t just survive; he thrived. . . . Boys like us longed for a way to save our fathers from themselves and our families from our fathers. And because that was impossible, boys like us devoted our adult lives to expressing our failures as heroes in the world through aspiring to be heroic in art…. Our wound was not just geography, as Pat once wrote, it was the unique spark of our hearts’ engines, and therefore kept us alive.”—Michael O’Keefe

“The wound we shared was permanent, not something that ever healed completely. We knew we would never be good enough. We didn’t know what bad thing was lurking just ahead of us.”—Cynthia Graubart

“If you are willing to read great books and work your ass off to write down what you are thinking and find your voice, it’s possible to emerge as a writer. To Pat there was no more sacred and worthwhile calling.”—Tim Conroy

“One painful irony was his recognition that his books had liberated throngs of fellow sufferers—the depressed, the abused, the father haters—not to seek therapy or write books but to share their miseries with Conroy at book signings. This was unwelcome duty for a writer who wasn’t inclined to guide others through their elf-realization. Writing is not group therapy. But such was the price Conroy paid for exposing so much of himself and his family, book after book, as he sought to explain his tortured childhood to himself.”—Kathleen Parker

“He portrayed the South in full—all its contrasting mystery and ugliness, beauty and brine, laid bare—and did so in a way that made it feel accessible to outsiders and refreshing to those of us who live here.”—John Connor Cleveland

“I carried on about how the setting and themes of The Prince of Tides spoke directly to me. Pat smiled and listened as if he hadn’t heard the same thing a million times form other readers. And I found myself confessing hidden pieces of my life. The abuse in the novel was something I understood. ‘Most writers had shitty childhoods,’ he said.”—Michael Morris

“So many writers I know today don’t even address the question. They’re not even God-curious. I still think that’s the difference between a great writer and a merely good writer. Great writers—whether they’re believers or not—are God-haunted. Pat Conroy was God-haunted. Maybe you didn’t know.”—Margaret Evans

“The trauma of his childhood and adolescence could easily have sent him into the abyss. I know that writing about issues evoking his past trauma could be cathartic for Pat, but there was also peril in descending into that past. Blending memory and art was a dangerous dance too…. He took what might have destroyed him and made it beautiful and true…. His art will endure.”—Ron Rash

“’My wound is geography.’ The wound he referred to was tied to his difficult youth and his abusive father. But his themes about surviving a dysfunctional childhood gave me the confidence to write bout subjects I had shied away from in my own work, like my mother’s rape and other personal difficulties.”—Marjory Wentworth

“What I learned from his life and friendship was a kind of theology: Stories and Life are both marvelous and dreadful. I can’t, as a reader or a writer or a human being, shy away from the broken world…. It’s all there together—the noble, the cowardly, the awful, the shining. As it must be I both our writing and our lives.”—Patti Callahan Henry

“Reading Pat, and later knowing him, has been a life-class not on y in how to write but how to live…. To love the South while refusing to accept its failing and shortcomings. To pay forward what cannot possibly be paid back. To write about your family, to love your family. To look directly at all the world’s horror, to face it honestly, but never to turn mean. That’s what knowing Pat and reading Pat taught me, and is teaching me still.”—Mark Powell

And now, if I had been invited to contribute to the collection, what would I have written?

That’s what Pat Conroy gave me. And I’d also like to say here—since this essay isn’t published in the book about Pat—that his wife Cassandra King was also a big part of my inspiration to write. When I met Cassandra at the Southern Festival of Books in 2006—the last year it was held in Memphis—she was talking about her book The Sunday Wife. We talked in person after her panel, and she wrote in the front cover of my copy of her book, “To Susan, who knows what a Sunday wife is.” I could write more about Cassandra and her books and what her friendship means to me, but since this reflection is supposed to be about Pat, I’ll get back to him.

I don’t remember what year it was when I first read The Prince of Tides. It was published in 1986 and the movie came out in 1991. I think I actually saw the movie first, and loved it. But when I read the book, I was blown away by two things: Pat’s incredibly beautiful literary prose, and the power of using real life experiences—in his case the abuse from his father—to fuel a novel. To make art from pain.

I had tried to write about my own personal wounds—sexual abuse first from my grandfather when I was four or five, verbal and emotional abuse from my mother for all of my life, and abuse from two different Christian leaders in the 1970s—and so I wrote a memoir. Two, actually. But I finally realized that I wasn’t willing to go public with some of the names and situations involved, so I followed Pat’s example and wrote a novel. It took several years to finish Cherry Bomb, a couple more years dealing with a New York literary agent (with whom I eventually parted ways), finding a publishing home, more editing and finally publishing the novel in August of 2017. It was so satisfying and healing, and I will always be grateful to Pat for inspiring me to do this.

When Beach Music came out in 1995, I devoured it and realized what everyone else already knew: Pat wasn’t a one-hit wonder. So I went back and read The Water is Wide (1972) The Great Santini (1976), and The Lord of Discipline (1980). For some reason I never read The Boo (1970). But all of these books were also full of art borne from suffering, and they are powerfully beautiful. In 2009, I read Pat’s final novel, South of Broad, and it came alive for me on two visits to Charleston, the “Holy city” featured in the book. I think it may be my second favorite of Pat’s books, next to The Prince of Tides. Of course I also loved My Reading Life (2010) and I wept as I read his memoir The Death of Santini (2013), which revealed even more of his tremendously loving and forgiving heart, as he did everything he could to heal his relationship with his father.

When I finally got to meet him, in 2010, Pat was speaking at the annual Pulpwood Queens Girlfriend Weekend in Jefferson, Texas. He was so warm and genuine in person, and so humble and generous with his time. He even purchased books from some of the (lesser known) authors who were presenting during the weekend and stood in line to have them inscribe the books for him. He donned an apron and helped serve plates for the author dinner one evening. And when he spoke, his love for not only writing but also writers—at whatever stage we were in with our careers—was evident, and blessed me greatly.

In May of 2017 I visited Pat’s home in Beaufort, South Carolina, for the first time, just over a year after his death in March of 2016. I was giving a reading at Nevermore Books in Beaufort for an anthology I edited, A Second Blooming: Becoming the Women We Are Meant to Be. Cassandra had contributed an essay to the book and joined me at the bookstore along with two other contributors, and then invited all of us to her house for dinner afterwards. I remember feeling a little awkward as she encouraged me to sit down in the chair at Pat’s writing desk, saying, “Maybe you’ll soak up some of his inspiration.” But I did sit there, as I had sat at his other desk earlier that day—the one that’s part of an exhibit at the Pat Conroy Literary Center. I swiveled around to take in the view of Battery Creek, which runs behind their home, and imagined how it might have inspired the beautiful descriptions of his beloved Lowcountry. I had just read A Lowcountry Heart: Reflections on a Writing Life (2016) and relished his words that were salvaged from various places that had published them previously. I was putting together another anthology when Pat died—Southern Writers on Writing (University Press of Mississippi, May 2018)—and was sad not to have an essay by him in the collection. Cassandra contributed a wonderful essay—“The Ghost of Josiah King,” and I was thrilled to have essays by more writers with ties to Pat’s beloved Lowcountry, like Nicole Seitz and Patti Callahan Henry. I opened the Introduction with these words from A Lowcountry Heart:

“In his book A Lowcountry Heart: Reflections on a Writing Life (published posthumously), the author Pat Conroy says: ‘My mother, Southern to the bone, once told me, “All Southern literature can be summed up in these words: ‘On the night the hogs ate Willie, Mama died when she heard what Daddy did to Sister.’”’”

Only Pat Conroy could write about the culture of suffering in the South with humor and get away with it. (Okay, so Rick Bragg also did this, and more recently, Harrison Scott Key.) I don’t do humor well, although I did use it some in my memoir about my mother’s journey with Alzheimer’s, Tangles and Plaques: A Mother and Daughter Face Alzheimer’s. Because you have to have humor to survive the ravages of Alzheimer’s.

I believe that Pat has received all the messages of love penned by the authors who contributed to Our Prince of Scribes, and that he’s reading my words, even now. So I’ll send a shout out to him as I close this tribute: THANK YOU for giving me permission to write. If I could hear his response, I know he would be saying, “Great love.”