>As I write this I realize it’s my first blog post in 2009! It feels like it should be something really significant, you know? And maybe it will be…. we’ll see…. 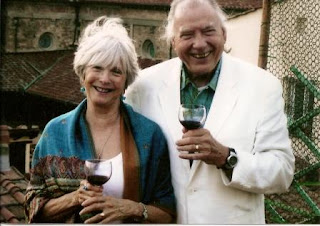 Starbucks for coffee. You’re probably thinking that I meant to say, “I met my friend Nancy at Starbucks,” but the syntax was intentional. You see, her real name is Nancy Mardis, but I have another good friend named Nancy, so I refer to this Nancy as “Nancy Starbucks” because we actually met at Starbucks about six years ago and have been getting together there regularly ever since. (When we met, we discovered that we are both artists and we both have adopted children from South Korea and we both love to read, and the friendship has grown from there.) This is Nancy and her husband Lloyd, who is battling cancer. He’s also an artist and a writer. Sweet, creative people.

Anyway, Nancy told me about Maryanne MacDonald’s column in the Home & Garden section of the Commercial Appeal, and yesterday’s article, “Ten Steps to Bring Order to Your Home in 2009.” She said that one of the tips was to “make appointments with yourself to work on organizing projects” and another was to “schedule two to four hours a week.”

“Because just yesterday I decided that’s what I’m going to do! I decided to set aside Monday mornings for organizing a space each week. I can’t believe that’s what the expert said. I feel very affirmed in my decision!”

Check out Maryanne’s web site. And especially her article, “Closet Control.” When I saw that article and the photos, I knew I would want to start with my closet. Well, actually, what started it all was my daughter’s amazing gift to me just before Christmas—she cleaned out and reorganized my attic! If you missed that post, it’s here. 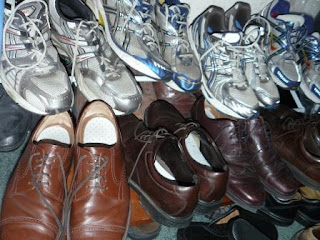 So… here are the “before” pictures. (I won’t show my husband’s side of the closet because, well, because it already looks pretty much like an “after” shot. Yeah. He’s like that. Well, okay, here’s a shot of his shoes. But you should see his desk!) 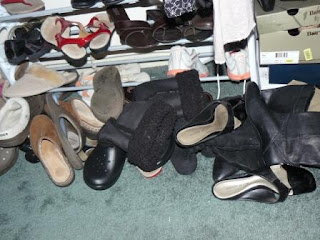 And here’s my side of the floor of the closet…. the shoes. 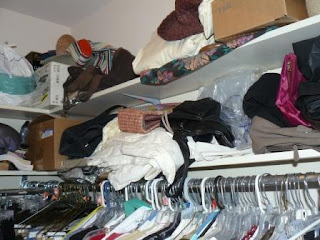 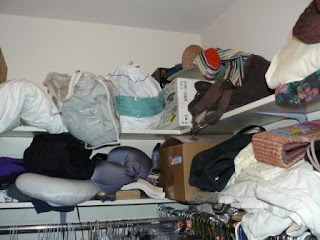 (I must say in my defense that it’s a very small closet for two people to share… especially two people who have been married for thirty-eight years and at one time had a much, much larger closet. This scaling down concept only works if you get rid of clothes, I think. I’m pretty sure that’s going to be part of the organization next week.)
I went on to tell Nancy that with the beginning of 2009 I was making plans to schedule in exercise (elliptical machine at the gym at first, and maybe add in some strength work later) three times a week, and also schedule in time for writing, but I haven’t decided how many hours or days yet.

Sounds good already! So… I started with exercise yesterday afternoon. I hadn’t worked those muscles in over a month, so I could only go for 20 minutes, but that covered a mile and a half, so it’s a start. The Cotton Bowl was on TV in the gym, which made the exercise go quicker. (Go Rebs!)

My daughter and I are going to Little Rock for the weekend to visit a friend, and not returning until Monday, so I won’t be able to get on track with the organize, exercise, write schedule until next Tuesday, but I’m actually getting excited about it. Stay tuned to see how I’m doing. This feels kinda’ like telling a friend you’re going on a diet and thereby making yourself accountable, you know? I know my blog readers will want pictures of each organized space and results of writing and exercise schedule (no before and after photos will be posted of the body!)… so stay tuned in 2009.

And in case any of my artist and writer friends are worried that all this order is going to quench my creative spirit, have no fear: even if I succeed in getting the entire house in order, I’ll always have my own very messy mind to go to for my creative energy! As Nietzsche said, “One must still have chaos in oneself to give birth to a dancing star.”