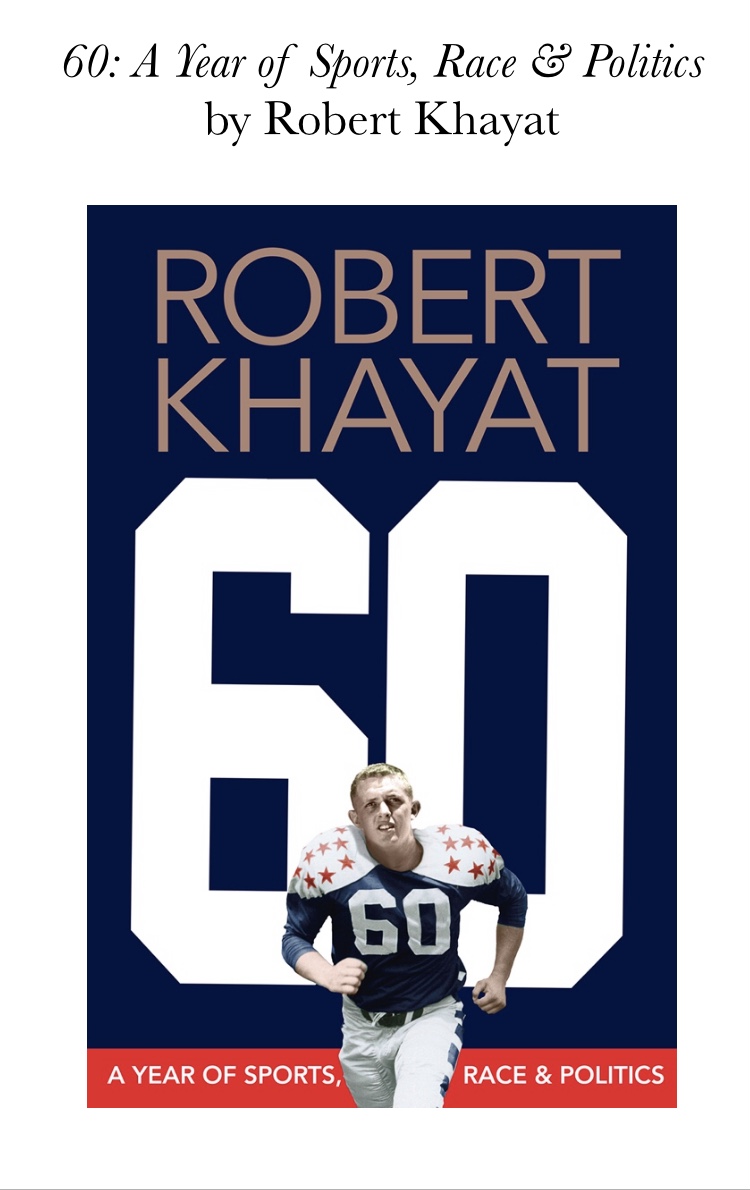 My friend Neil White, owner and director at The Nautilus Publishing Company in Oxford, Mississippi, has just sent me this press release for a new book from Robert Khayat, Chancellor Emeritus at the University of Mississippi. I CANNOT WAIT to read this book, which deals with so many issues that my new novel JOHN AND MARY MARGARET addresses, a few years later, on the Ole Miss campus, where I was a student in 1969-70. Read all about it here, and pre-order from your favorite indie bookstore, especially Square Books (Oxford, Mississippi), Burke’s Books (Memphis, TN), Lemuria Books (Jackson, Mississippi), and Reed‘s (Tupelo, Mississippi).

OXFORD, Miss. — In 1960, at the age of twenty-two, Robert Khayat’s future could not have looked brighter. He was an academic All-American, the top kicking scorer in the NCAA, an All-SEC baseball player, and headed into an All-Pro season in the NFL. No one could have predicted — least of all a naïve young man from Mississippi — what fate had in store for Khayat.

60: A Year of Sports, Race & Politics (Nautilus, 2021) is the story ﻿of 1960, as seen through the eyes of Khayat. That seminal year — Civil Rights, professional football, and politics — changed everything for a nation, its culture, and a promising young man from Mississippi.

With unflinching candor, Khayat reveals the details of his father’s unlikely rise and fall in Mississippi politics. He contrasts the careers of Washington Redskins owner George Preston Marshall and Mississippi Governor Ross Barnett — two of the most high-profile targets of the Kennedy administration — and how their actions ultimately impacted Khayat’s career. And, with uncommon vulnerability, he divulges his near-death experience in Vicksburg’s Mercy Hospital and a subsequent addiction to pain medication.

The book also features detailed accounts of the 1960 Ole Miss baseball team being banned from post-season play because the squad “might have” encountered an integrated team, the riots on the Mississippi Coast during a planned “wade in” on the public beaches by Black residents of Biloxi, and a dramatic trial that took place in Oxford that forever changed the landscape of professional football.

Rheta Grimsley Johnson, an author, journalist, and Pulitzer-Prize finalist, said, “In his new memoir 60, Khayat blends his life story with political and cultural sea changes in the year 1960. And he reveals things about himself we never guessed. From the struggles of his son-of-an-immigrant father to assimilate and succeed, to the traumatic football injury that almost killed him, Khayat spins an honest and compelling story without over-reaching sentiment or self-pity. As he has so often in life, Robert Khayat hits the mark.”

Khayat said, “I’ve had sixty years to reflect on the remarkable year that was 1960.” And in 60: A Year of Race, Sports & Politics, Khayat shares with readers the meaning he gleaned from sixty years of reflection, and the toll those events ultimately took on Mississippi and our country.

That rarest of luxuries afforded a writer — time — can lead to great gifts for a reader. This story is one of those.

60: A Year of Sports, Race & Politics goes on sale August 23, 2021, at bookstores everywhere. To order, or for more information, visit RobertKhayat.com.

﻿    Robert Khayat is chancellor emeritus at the University of Mississippi. As a student at Ole Miss, he was a two-time All-SEC baseball player. He was selected for the Academic All-American football team, and he led the nation in scoring among all college kickers. He played in the National Football League with the Washington Redskins for three seasons and was selected for the Pro Bowl in 1960. While still playing in the NFL, he enrolled in law school at Ole Miss and earned a juris doctor degree in 1966. He was appointed to the University of Mississippi law faculty in 1969 and earned an LLM from Yale University. He has received the Lifetime Achievement Award from the NFL and the Distinguished American Award from the National Football Foundation.

He was named chancellor of the University of Mississippi in 1995. He and his leadership team increased enrollment by 43% (and minority enrollment by 79%), brought in research and development grants of more than $100 million, started an honors college, raised $540 million for the endowment, and retired the Confederate flag and other old symbols associated with the university. Under his tenure, Ole Miss was designated to shelter a Phi Beta Kappa chapter and was selected to host the first 2008 presidential debate.

His first book, The Education of a Lifetime, was a “New York Times” best-selling education book. The Mississippi Library Association named him 2013 Author of the Year, and the book earned a national IPPY Award for best memoir.