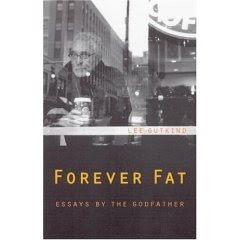 I’ve been reading two books in preparation for tomorrow’s Creative Nonfiction Workshop led by Lee Gutkind at the University of Mississippi in Oxford. I talked a little about one of these in my post of September 19 – about In Fact: The Best of Creative Nonfiction (Gutkind). Gutkind was the first to teach creative nonfiction on a university level, starting at the University of Pittsburg in 1973. Today I’d like to share a bit from Gutkind’s book, Forever Fat. First, Gutkind’s definition:

And a little exposition by Gutkind:

The term “creative nonfiction” was adopted by the National Endowment for the Arts to represent the different styles within the genre (memoir, immersion journalism, etc.) … there’s an explosion of altogether brilliant nonfiction prose being written today by people about whom they are writing while communicating compelling information and striking some sort of universal chord. What about Angela’s Ashes (Frank McCourt)….

Unfortunately, however, with so many new people discovering creative nonfiction from so many different orientations (especially in the areas of psychology, literature, and composition), the journalistic, fact-oriented roots of creative non-fiction are often forgotten—or ignored. Writers can become too enamored with the creative part of the term, paying precious little homage to the nonfiction part. There must be a delicate balance between style and substance.

It’s a genre under attack. Possibly because novices to the field too often blur the lines between fact and fiction. If you want to make stuff up, write fiction. In creative fiction, as Gutkind says, “we draw the line; we do not make up information of any kind—for any reason.”

In its purest form, creative nonfiction is… nothing else but real—with all of the potential flaws and warts of any real human being. Mostly people attack writers of creative nonfiction because we are too difficult and complicated to figure out. And we can become much too embarrassingly public.

That last point is something those of us who blog regularly must constantly keep in mind. When you think about it, blogging is the most prolific form of creative nonfiction happening today. And it doesn’t get much more public than the internet. Every day as I write here at Pen and Palette, I am aware of my audience. This is not a private journal. I have invited you into my thoughts, into my personal point of view and voice, hoping that, on a good day, I might succeed in, as Gutkind put it, “communicating compelling information and striking some sort of universal chord, and raising the craft to an art!”

Isn’t that why we read blogs? And why we write them?

Okay, sure, some days we just chat about our pets and our families or even our new shoes or a delicious cocktail we just discovered. But hey—we’re human. And all those seemingly insignificant details are part of what makes us who we are. And those of us who take blogging seriously will realize that each post is like a chapter in a creative nonfiction book. Am I shooting too high here on this little cyber-space journal? I don’t think so. In fact, I believe, as Gutkind says:

… the essence and the meaning of creative nonfiction: the ability to capture the personal and the private and to make it mean something significant to a larger audience and to provide intellectual substance that will affect readers—perhaps even incite them to action or to change their thinking—in a compelling and unforgettable way.

Gutkind does this in spades in his essay from which the title of his book was drawn, “Forever Fat.” Having struggled with eating disorders and diets and exercise addictions for almost forty years, I was so moved by his candor and courage in sharing his struggle. I’ve read countless books and articles about eating disorders over the years, taking a little from this one and a little from that to strengthen me along the way. Gutkind’s story is now on top of the stack. His childhood obesity and the ostracization he received. His successful weight-loss and fitness improvement in the military. His rediscovery of reading as “a solitary activity that provided comfort and an escalating emotional awareness.”

Just because I am solid and muscular, can lift heavy weights, and run ten miles with no significant effort, doesn’t mean that I am not fat. Buried deep down inside… I am constantly struggling to remember who I am…. The extend to which you control that fat fucker seeking therapeutic relief through eating inside your body—how you balance the mirror’s double image—is a challenge all formerly fat people share.

In psychological terms, it’s the struggle to make our insides match our outsides. Needless to say, I can’t wait to hear Mr. Gutkind speak at the workshop in Oxford tomorrow! 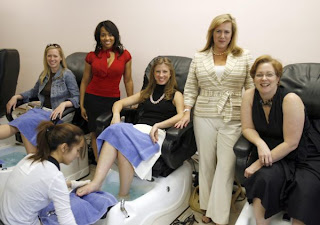 On a lighter note …. I’ll be carrying bundles of the October Memphis premiere issue of skirt! magazine down to Square Books during lunch break at the workshop tomorrow. The launch party at Elfo’s last night was wonderful! Maybe I’ll have pictures by next week. For now, here’s a pix of Leanne Kleinmann and her staff… getting pedicures to celebrate their first issue!

It was fun meeting Joann Self, founder and executive director of True Story Pictures. Read about her latest project, working with advocates for the mentally ill in the criminal justice system, “Voices of Jericho.” And Jenny Odle Madden, co-founder and executive producer of Voices of the South theater company. Joann’s video projects and Jenny’s production company are just two of many examples of the Memphis arts community in action. They are both featured in the October Memphis skirt!

Hopefully by Monday you can read the articles online. Look for my essay, “myPod,” on page 29. It’s nothing very ethereal. But it might give you pause… to think about the importance of naming things… and people.

My best friend is coming in from Little Rock tonight to attend the workshop in Oxford with me tomorrow. Then on Sunday afternoon, I’ll be at the third meeting of the Mixed Bag Ladies. Sunday night, hubby and I are off to our new dinner club’s first gathering… it’s a 50s themed evening, so watch for photos on Monday! Have a great weekend!
Please share!

5 thoughts on “>Creative Nonfiction: Raising the Craft to an Art”