Since my mother died in May, I’ve been going through some paperwork and discovered a file folder I hadn’t looked at in many years. Mother had labeled the folder “Susan’s Letters, Ole Miss.” What a treasure… letters I wrote home from Ole Miss in 1969 and 1970, my freshman (and only) year there. Other miscellaneous items had found their way into the folder, like report cards from back in elementary and junior high school. I got a kick out of a comment on my choral music report card from Chastain Junior High in April of 1965: “This is the last ‘S’ on attention I will give–improve!!” Guess I was easily distracted… But I was pleasantly surprised to see my first semester grades from Ole Miss: “A”s in art, English and French, and “B”s in western civ, algebra and PE, for a 3.56 GPA! (I didn’t remember doing that well. I spent most of the year pledging a sorority and then planning my wedding!)

One item I don’t remember finding in this folder in the past was the commencement speech given by my husband at his graduation in June of 1970. It was only two short weeks before our wedding, and I remember being so proud of him as he stood and gave his response to Chancellor Fortune’s remarks. He was only 21 years old. As I read his words again today, forty six years later, I’m still proud of him. He will probably be embarrassed, but I’m going to share them here. Be sure and read the final paragraph to see why his speech is included in my “Faith on Friday” post. 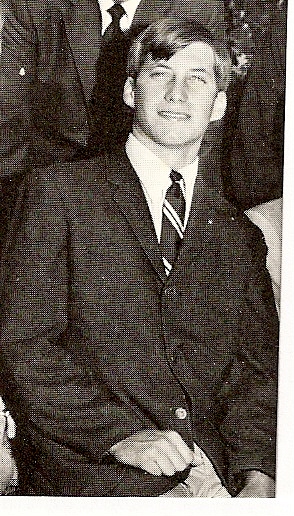 The University of Mississippi 1970 Annual Commencement

Let me begin by saying that I identify with the establishment. But there are some basic inconsistencies within this system that have created the polarization that Chancellor Fortune mentioned a moment ago.

Many people predicted that my generation would live in a world of near utopia—a world with no fear of war or hunger. And yet, we find ourselves confronted with increasingly crucial problems.

Young men today are literally compelled to risk their lives in a war from which the majority of Americans feel we should withdraw. By and large these young adults are denied the right to express their views with a vote. Ironically this sounds like involuntary servitude, or, at least, conscriptive taxation without representation. Is it any wonder that thousands of young people feel compelled to create a disturbance in order that someone will listen?

Unfortunately, they continue to be frustrated, being written off as “mere children” who will someday “grow up.” This frustration has persisted for so long that many young people now believe that the only way to improve our society is to present an active opposition to the existing system. This activism manifests itself in the violence we have witnessed on many college campuses today.

I am strongly opposed to these violent expressions, but I cannot, and I hope you will not, categorically condemn a confused and disillusioned generation.

Some have said that student violence in this country began at the University of Mississippi in 1962. Whether this accusation is true or not, this University has matured a great deal since that time and has undergone many changes:  For the most part it has not been change merely for the sake of change, but rather for the sake of definite progress in a constructive, and not a destructive, manner.

Nevertheless, even our campus has not been free from the political polarization and other dilemmas that colleges throughout the United States are experiencing.

What I am saying, then, is that, as graduates, we will be confronting a multitude of problems. Perhaps we will solve them, and then again, we may not. But as Chancellor Fortune has challenged, we must be individuals and seek out our own answers.

The way that I have found to deal meaningfully with these problems is through what I feel to be the wisdom and love of God as expressed in Jesus Christ. This is my personal response, and it does not necessarily represent the convictions of my fellow graduates. But let me urge that each one of you honestly seek out your solution.

9 thoughts on “Faith on Friday: Commencing… with Jesus”