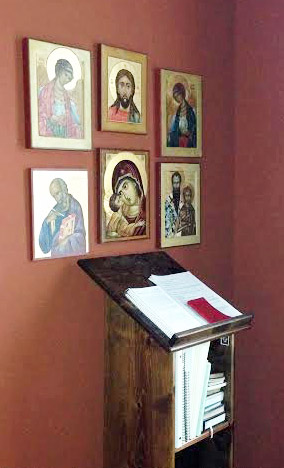 I have read dozens of books about prayer—including my favorites from the Orthodox spiritual tradition, like Beginning to Pray, Courage to Pray, and Living Prayer, by Metropolitan Anthony Bloom. In recent years I’ve enjoyed books on prayer from more diverse sources, like Anne Lamott’s Help, Thanks, Wow and Flannery O’Connor’s A Prayer Journal.

As an Orthodox Christian, I have a “prayer rule.” My spiritual father helped me set it up about twenty-five years ago. It includes a number of “set” prayers in the Orthodox tradition, and also a time for repentance, and for supplication for others. For several years when I was more attentive to my prayer life, I stood before my icons and prayed these prayers every morning and night. And I made efforts at practicing what is known as “The Jesus Prayer” during the day.  And then I went through a dark period, spiritually, during which I didn’t pray very much.

After my car wreck in July of 2013, I began to pray again. For several months I could only pray lying in a hospital bed in my office at home. It took a while before I had the strength to pray standing before my icons again. And now—since I’m “recovered” to what I call my “new normal,”—I have the strength to stand and pray, but I find myself following this practice only in the mornings. Somehow by evening the day has worn me down and the bed (or sometimes the TV or a good book) calls to me more strongly than the prayer corner. And I’m not making much effort with spontaneous prayer throughout the day.

Recently I had an experience that reminded me of the power of prayer. Especially the power of having a mindset of awareness of God’s presence. I was dealing with a frustrating situation in my writing life (which still isn’t resolved) and I found myself so anxious about it that I lay in bed one night this week thinking about the issues involved until I realized that I had not prayed about it. At all. And so I turned my thoughts towards God and told Him all about the situation (as though He doesn’t know) and how anxious I am. And then I began to pray for the other people involved—for their minds to be open and their hearts to be soft as we continue working through the situation. And finally I asked God to please give me peace within the situation.

An amazing thing happened. I felt less anxious. I slept peacefully and have continued to deal with the situation in the following days with a still heart and more clarity of mind. 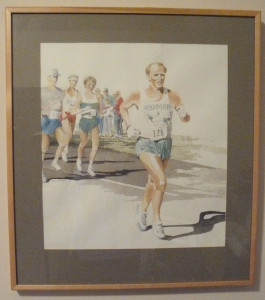 Why are we always surprised when we do the right thing and it brings good results? My husband (and my father, who died in 1998) is the kind of person who just does the right thing, almost intuitively. He’s very disciplined, as was my father, who ran marathons into his late sixties. Mom and Dad owned Bill Johnson’s Phidippides Sports in Jackson, Mississippi, from 1982-1997. Initially they had an exclusive contract with Nike (before Nike broke the contract and began to sell their shoes in discount stores) and I remember that my Dad loved Nike’s slogan: “Just Do It!” It was while I was working for Mom and Dad, running the aerobic dance studio at their store, that I learned to put that slogan into practice and lost weight and got into good physical shape for the first time in my life. Here I am twenty-five years later trying to get my 64-year-old body back into shape by eating less and exercising more. As I work out on my elliptical machine in my office at home, I find myself looking at the large watercolor picture on the wall in front of me for inspiration. It’s a picture of my father running in a marathon. When I’m tired of exercising and want to quit, I listen for his voice. There it is: “Just do it!”