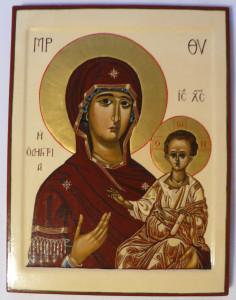 On Fridays at noon we pray what is known in the Orthodox Church as Paraclesis Prayers to the Mother of God. I haven’t been to these in a while, but today I was anxious to entreat her on behalf of those for whom I have special concerns.

First I met a friend for coffee at Café Eclectic, which is only a few blocks from St. John Orthodox Church. It was nurturing to catch up with this friend, and we talked about our children, icons, and spiritual things, as well as our common love of art. I had a couple of hours of errands to run afterwards, but really wanted to go to the Paraclesis prayers first, and I’m so glad I did.

The priest sets an icon of the Mother of God “Directress” (because her hands are directing us towards her Son) on a stand in the middle of the solea, in front of the iconostasis. Several times during the prayers he censes the icon as we chant various hymns. The hymns are really prayers. Some are penitential in nature, and some are supplicatory. Some people had turned in the names of people they specifically wanted to pray for. I just prayed for “my people” silently in my heart as the names were called.

I believe the Mother of God hears our prayers and intercedes with her Son on behalf of those who pray to her, and for those for whom we are asking help. My busy afternoon of errands was filled with peace. Tomorrow is my mother’s 88th birthday. She is one of the people for whom I prayed today, and I know my prayers were heard.