My friend Emma Connolly just sent me a link to Father Richard Rohr’s blog. Rohr is a Franciscan priest and Christian mystic. He has a series of meditations called, “Ripening.” She sent it in response to a follow up conversation we were having about the gathering at my house recently featuring Sally Thomason and her book, The Spirit of the Living Crone: Turning Aging Inside Out.

Emma knew I was struggling with this whole “second half of life” thing. My struggle has to do with the way I spent the first half. When one doesn’t mature “on schedule” (for any number of reasons) it’s more difficult to transition inward for the second half. We’re often still focused on getting our egos fed, rather than settling into a more inward-focused life.

Rohr talks about this transition in his daily meditation from yesterday, “Eldering.” Here’s a sample:

We live in a society with elderly people, but very few elders. That’s not because they’re bad people, but there haven’t been guides from the first half to the second half of life, so most of us stay innocently in the first half. True second half of life people are wonderful mirrors. They no longer need to be mirrored themselves so they can do it for others (2 Corinthians 3:18). They are not crying, “Notice me! I’m important.”

I’ve met only a few true elders in my life. I lost one of them in 2008. A wise and compassionate “mirror,” Urania became a “yia yia” to me (and many others) in our church and in the community. As I’ve written earlier, I met another wise and compassionate elder a few months ago when we moved into our current house. Sally lives right across the street, and she is a wonderful mirror. As Rohr says:

Elders have a wider, long distance lens. They are patient with first half of life folks who are still ego-driven, because they know they were there once, too. Healthy cultures have been guided by such wise seniors (“senators”) who naturally live a generative existence in service of the common good. They “live simply so that others can simply live,” as Gandhi said.

Those two quotes are from Rohr’s book, Falling Upward: A Spirituality for the Two Halves of Life. I’m ordering it today. (You can listen to Rohr talk about his book in this video.)

In another post, “A Clear Trajectory,” Rohr talks about what he calls “ripening”:

… we see there is a clear direction and staging to maturity and therefore to human life…. We live inside of some kind of coherence and purpose, a believer might say.

Unless we can somehow chart this trajectory, we have no way to discern growth or maturity, and no ability to discern what might be a full, fuller, or fullest human response. Neither do we have any criteria for discerning an immature, regressive, or even sick response. 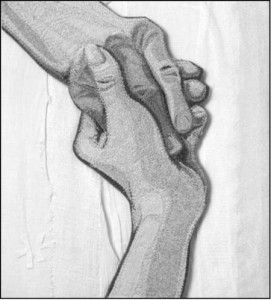 I’m actively looking for this trajectory for this stage of my life. In her book, Sally calls it a “map.” As I continue to work on the goals I set for myself about ten years ago (to pursue my art, and especially to write and publish books) I’m trying to re-shape those goals—and the driving energy behind them—into age-appropriate pursuits. I’m trying to grow up, but my ego is clinging to some of those first-half mindsets. Rohr’s wisdom is helping:

If I am to believe the novels, myths, poems, and people that I have studied in my life, old age is almost never described as an apex of achievement, hardly ever sitting atop a summit with the raised arms of a victorious athlete. It is something else—usually something other than what was initially imagined, or even hoped for. Let’s call it a slow ripening.

A slow ripening. Maybe I can do that. Maybe I can develop a wider, more long-distance lens and become more patient with myself. It sure helps to have elders.

6 thoughts on “Faith on Friday: Ripening, Eldering, and Falling Upward”