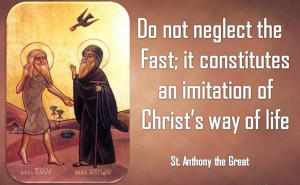 The season of “Great Lent” (link goes to the Orthodox Church in America’s web site) begins soon for Orthodox Christians… on Clean Monday (February 23.) It’s also commonly known as the “Great Fast.” This coming Sunday is called the Sunday of the Last Judgment, affectionately known in most Orthodox parishes as “Meatfare Sunday.” Why? Because it marks the last day for eating meat before the “Great Fast” begins. Our parish always has a potluck meal after Liturgy, and as you can imagine, the tables are laden with lots of meat dishes. I don’t know if there’s a relationship between this tradition and “Fat Tuesday,” but I always think about the partying that goes on during Mardis Gras at this time of year. But that’s a rabbit trail. Where am I going with this talk of fasting? You KNOW this is not my favorite subject. But in case you’re new to my blog—or unfamiliar with the Orthodox custom of fasting—an article in the Greek Orthodox web site says this about fasting:

Fasting in its religious setting is abstinence from food, always in relation to a religious event or feast. Fasting in itself has no meaning in the Christian Church, but has a role the attainment of Christian virtues. It is not to be accepted as a mere custom without a spiritual purpose. Fasting is understood as a means of temperance and sobriety, especially in relation to prayer, devotion and purity. It is also understood to be related to giving alms to the poor.

The Antiochian (another jurisdiction) Orthodox web site also addresses fasting. One small snippet from this site:

Fasting is not an end in itself. Our goal is an inner change of heart. The Lenten Fast is called “ascetic.” This refers to actions of self-denial and spiritual training which are central to fasting. 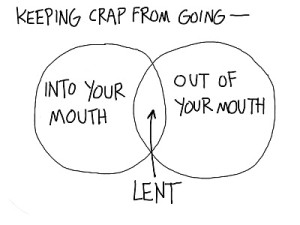 So that’s a primer on fasting. Sounds pretty straight-forward, doesn’t it? Until you try it. Keeping the Orthodox Lenten fast to its fullest involves abstinence from all meat and dairy products for forty days leading up to Pascha (Easter) and abstinence from fish and alcohol (and even cooking oil) for most of those days. It’s a strict vegan fast. Granted, many Orthodox Christians don’t embrace the fast to the letter of the law—I certainly don’t—but it’s still there. Like a goal to be reached or a standard to be achieved. And the difficulty is compounded for folks like me with a lifetime history of eating disorders.

In much Orthodox literature fasting is grouped with two other virtues—prayer and almsgiving. These three are taught together, with warnings that any one of them without the other two can be ineffective. And yet, the season of Lent isn’t known as “Great Prayer” or “Great Giving.” I’d like to rename it “Great Love,” since doing any of these things without love is meaningless. And besides, fasting has such a negative ring to it—it’s about something we should NOT do, whereas prayer and almsgiving are about something we SHOULD do.

Much ado about semantics? I don’t think so. But while I’m trying to pray more and give more and love more—not only during Great Lent but all year long—I’m always struggling with the fasting thing. Each year during this season I look for help with this. This week I found something that might help. It’s from Father Stephen Freeman’s blog. Father Stephen is an Orthodox priest in Oak Ridge, Tennessee. This is from his blog, “Glory to God For All Things.” It’s called “Boundaries: Borders and the True God”: 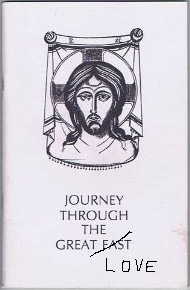 A medicine for our boundless egos. (Read the entire article to learn more about what he means by the ego.)

This is surely something I need for my soul. Maybe if I focus on loving God (something I struggle with greatly) and others more than myself I can embrace those boundaries of fasting… maybe a little bit.

Meanwhile, I’m renaming the season. For me it’s going to be “The Great Love.”