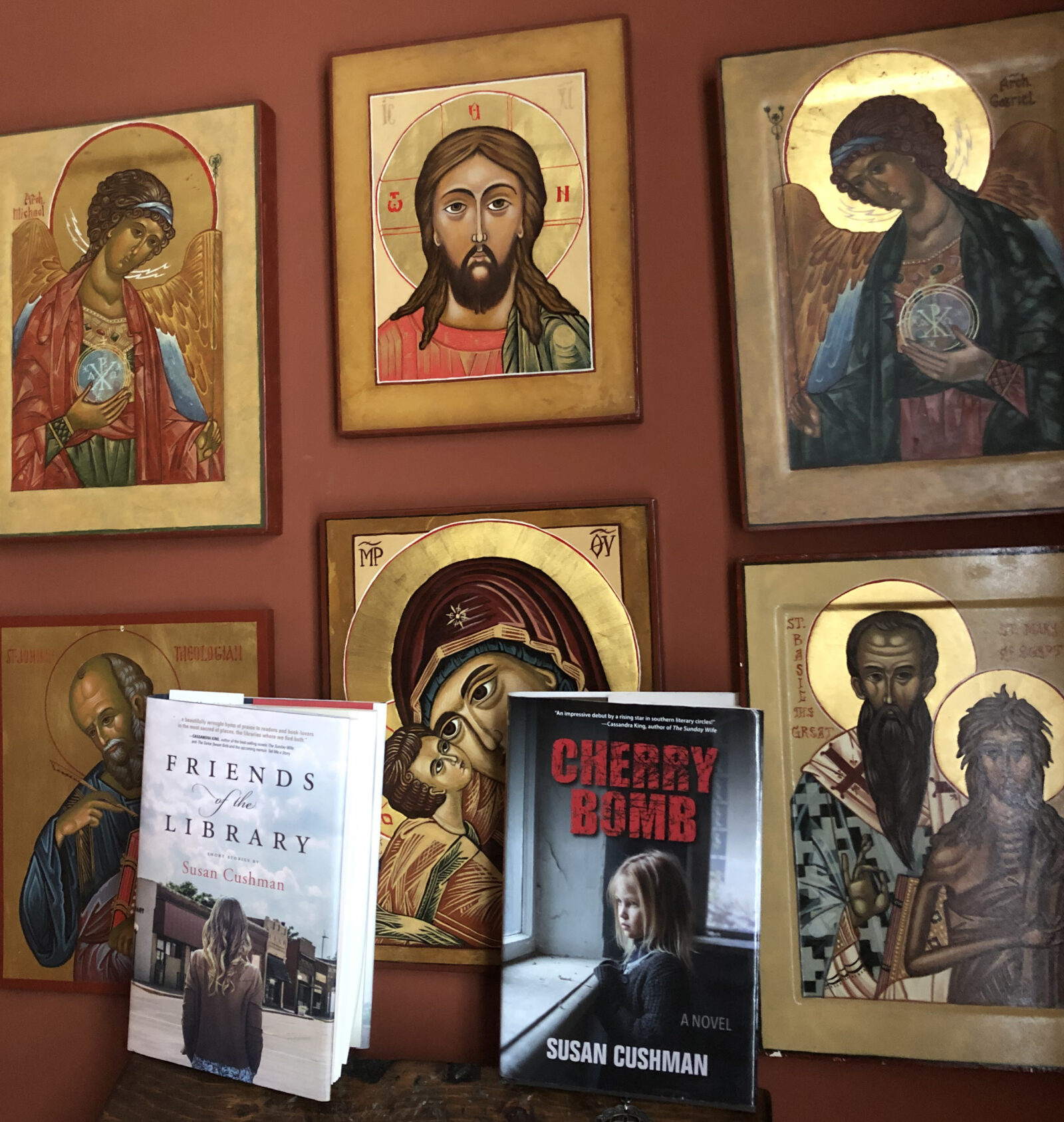 A taste of my Orthodox Christian faith folded inside my novel and my short stories . . . .

I’m a member of a Facebook group called “Mutual Aid for Orthodox Writers and Bloggers.” Sometimes I feel like a fraud because most of the writers and bloggers in the group write exclusively about Orthodox topics. I’ve published five books, and none of them are exclusively Orthodox, or even primarily Christian in theme or content. The closest might be my novel Cherry Bomb, which has several chapters involving Orthodox churches, priests, nuns, and icons. And yet it’s important to me to stay connected with my fellow Orthodox writers and bloggers, and I wish I did a better job of supporting and encouraging them.

Since my novel was published in 2017, and recently when my short story collection Friends of the Library came out in August, I’ve receive lots of questions about icons, in person at events in bookstores and libraries, and in online “chats” in Facebook groups like Novels N Latte Book Club, Bloom With Tall Poppy Writers, Sue’s Booking Agency, A Novel Bee, and The Write Review.

So today I thought I’d post a link to an informative article I had published in First Things (“America’s Most Influential Journal of Religion and Public Life,”) back in 2007: “Icons Will Save the World.” It’s a lengthy piece, so if you don’t want to read the entire article, I’m going to share one section here.

Two very mystical examples of God’s response to the serious condition of fallen man are miracle-working icons and weeping icons. There are countless stories of people who have been healed by icons, flooding rivers diverted by icons, and cities protected by icons from invaders. Thousands of faithful Christians make pilgrimages to venerate these miraculous icons all over the world. Some are seeking healing; others are offering thanksgiving to God for his protection and grace given through the icon.

My first personal experience with weeping icons took place in 1997. I had the blessing of accompanying several nuns from Holy Dormition Orthodox Monastery in Rives Junction, Michigan, to Holy Transfiguration Orthodox Church in Livonia, Michigan, to venerate four weeping icons. Each of the icons of the Mother of God had been in the home of a pious woman who brought them to the church as they began to exude myrrh or oil. When these miracles occur, a number of church hierarchy are called in to verify the legitimacy of the claim. Once confirmed, the icons are usually placed in the church, and pilgrims are invited to come and pray before the icons and receive anointing with holy oil from them.

Nothing could have prepared me for this experience. As we entered the church, the nuns were immediately greeted by several parishioners and were invited up to the front of the nave. I followed their examples as they approached each icon, made three prostrations (kneeling and placing their faces on the ground), and then gathered as a group in front of the iconostasis. Then they began to sing hymns to the Mother of God. I tried to sing with them but couldn’t stop crying long enough, nor did I want to detract from the celestial purity and beauty of their voices. For me, the spiritual presence of holiness overwhelmed the physical signs¯the sweet smell of the myrrh and the visual image of the oil dripping from the icons into containers placed beneath each one. But the physical signs were also indelibly etched into my soul.

A couple of years later, I joined three other friends from my parish in Memphis for a weekend pilgrimage to Chicago for the purpose of venerating several miracle-working icons at three different Orthodox Churches. One of them was the Tikhvin Icon of the Mother of God (attributed to St. Luke), which had been brought to this country from Russia in 1949 to save it from the Communists and Nazis who were destroying icons in Russia. (The Tikhvin Icon was returned to Russia in 2004.)

But it was another miraculous icon, one that has received less attention than the Tikhvin icon, that touched me. Another icon of the Mother of God, it adorned the iconostasis of St. Nicholas Albanian Orthodox Church and began weeping in 1986. What struck me most about our pilgrimage to this particular church wasn’t the icon itself. It was the love and devotion expressed by another pilgrim. I didn’t talk with this woman, so I don’t know her story. But I watched as she knelt at the back of the nave, and then walked on her knees the entire length of the center aisle of the church and crawled up the steps of the solea (the raised platform in front of the iconostasis) to light a candle and venerate this icon. I could hear her praying in another language . . . and I witnessed a humility and love for God that humbled and inspired me.

So, here are a few links to some of my Orthodox writer friends’ web sites and blogs. I hope you will check them out.

First my friend “Charli” Charlotte Riggle’s site, which features two wonderful picture books for children, Catherine’s Pascha and The Saint Nicholas Day Snow. Charli also has a wonderful blog, where she writes about lots of important issues like children with disabilities.

Next up is Summer Kinard, whose site features “autism, church, disabilities, children’s ministry, and homeschool.” Her book Of Such Is the Kingdom: A Practical Theology of Disability releases on October 22.

Nicole Marie Roccas writes for adults, and has recently started hosting a podcast, “Help My Unbelief,” with her husband, Basil. I was recently blessed by reading her book Time and Despondency, which I blogged about in 2018.

Not all my Orthodox writer friends are published with Ancient Faith Publishing, but quite a few are, so you can check out their web site for more titles. This post isn’t meant to be exhaustive, but more of an introduction. Thanks so much for reading! Please leave a comment or a question here or on Facebook and I’d love to respond!