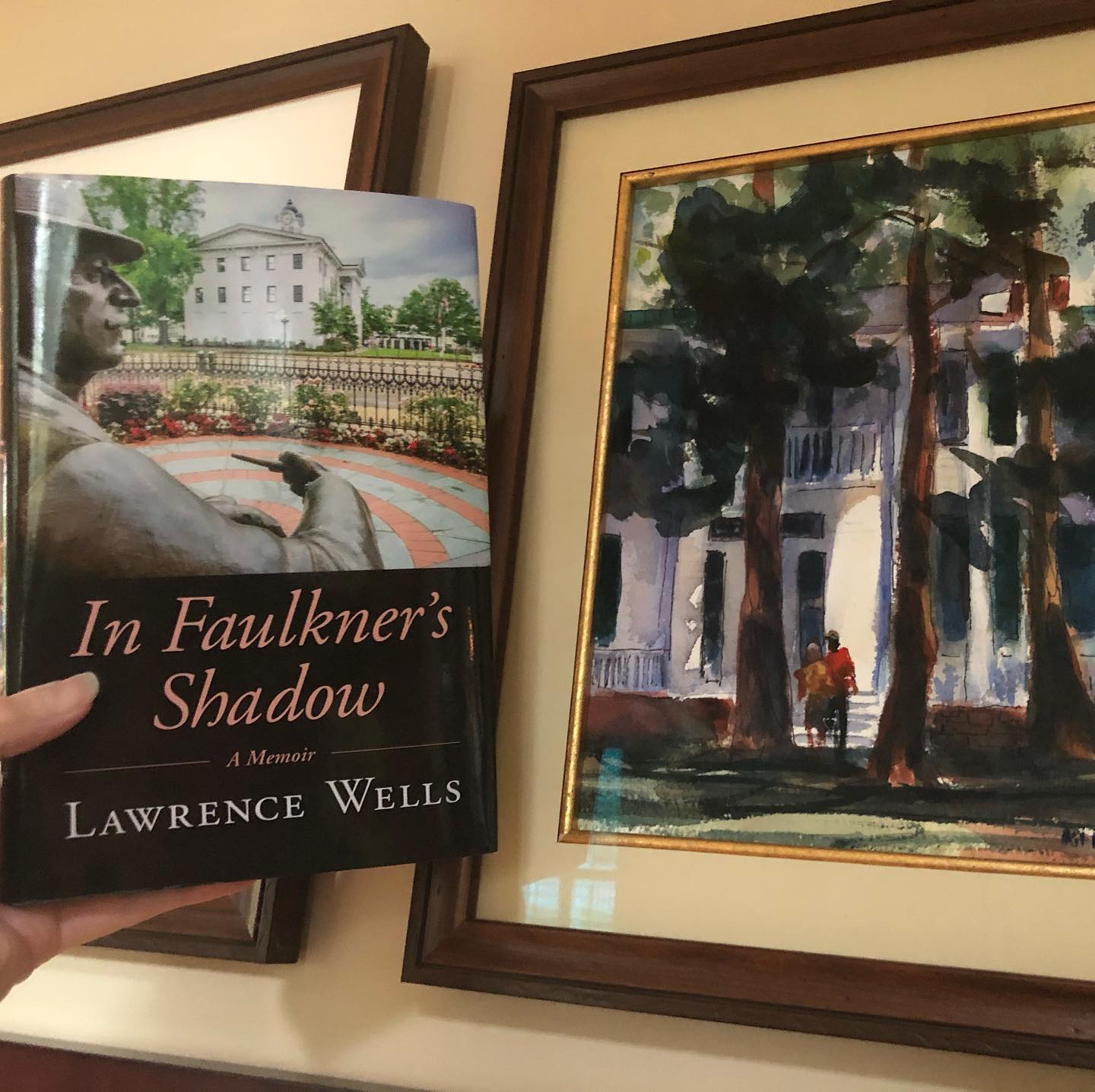 A Memoir by Lawrence Wells

I’ve just finished reading a wonderful memoir, In Faulkner’s Shadow, by Lawrence “Larry” Wells, widower of Dean Faulkner Wells, niece of William Faulkner. Dean died in July of 2011, after having published her memoir, Every Day By the Sun, in March of 2011, on her seventy-fifth birthday. I am sad that I never met Dean, as reading about her shows that she was a colorful and creative presence in Oxford, Mississippi, home to an ever-growing number of Southern literati.

I did, however, spend one very memorable evening in the Wells’ famous kitchen in the original home of Maud Faulkner at 510 S. Lamar. On November 3, 2016, my husband and I drove down to Oxford to hear our friend Cassandra King read from her husband Pat Conroy’s final book, A Lowcountry Heart, during the Thacker Mountain Radio show at Off Square Books. Larry had invited Cassandra and others at the event for a gathering at his house afterwards, and Cassandra asked us to join them. Larry was a gracious host, and I felt honored to be in the presence of so many of Oxford’s literary elite.

Wells quotes Jim Dees, master of ceremonies for the Thacker Mountain show, as saying: “Larry and Dean Faulkner Wells’ kitchen table was a warm gathering spot for friends and a touchstone for travelers seeking the Faulkner heat.”

It was fun to read about earlier events that happened in that house including one night when the Oxford novelist Larry Brown met Jim Harrison in “Miss Maud’s kitchen,” and recited Cormac McCarthy. As Dees writes: “Larry Brown finished to a round of applause and the image has always stayed with me. . . . Just part of the everyday magic of 510 South Lamar—a house haunted in a good way.”

I especially enjoyed the chapters about Willie Morris and Barry Hannah—their literary careers and their explosive personalities and relationship. Morris became Ole Miss’s first Writer in Residence. I never met him, but I really like what Wells wrote about his editing skills and how I can apply them to my own work both as an author and an editor:

Editing, to him, was like breathing. . . . (he) entered the writer’s thought process, and reshaped the narrative without altering style or voice. . . . All he added was shading for depth and focus. . . . What he showed students over and over was not how to write but how to edit themselves, and that the key is distancing oneself from one’s work.

When the English department invited Barry Hannah to join the faculty, he was instantly jealous of Willie Morris. Their feud—which to my reading seemed fueled more by Hannah than Morris—lasted for years. He was definitely gifted. Wells quotes novelist Tom McGuane as saying, “Barry Hannah writes like an angel.” And Wells added, “A dark angel, that is, who lived through his characters, followed them into real life and egged them on.” Wells went on to say, “All writers begin as book fiends, eggheads, and smart-alecks. As fuel for fiction they nurture neuroses and hang onto slights endured in junior high.”

Or maybe struggles with abusive mothers who have Alzheimer’s? In the summer of 2009, Barry Hannah held several afternoon writing workshops in Oxford to raise money for a friend who had cancer. I signed up for two of them, which were held in bars on the square in Oxford.  At the first workshop, on June 19, 2009, I submitted a short story to be critiqued by Hannah and a couple of MFA faculty members who joined him. Hannah felt that the teenage girl—the protagonist in my short story—had unrealistic expectations. “Life is messy,” he told me. “You’ll never get what you want.” Other comments included, “Be more concrete—like O’Connor and Hemingway.” Sure. I can do that.

The next week I took an essay to be critiqued at the workshop, and this time he wrote across the top, “Excellently written,” which I took as high praise. But then he drove home a lesson I will never forget. He said that the characters—in this case my eighty-something-year-old mother with Alzheimer’s and me—didn’t instill enough interest or empathy, at least not for him as the reader. He looked at me and said, “Who cares?” At first my feelings were hurt, but then he explained that the reader has to care about the characters—whether he likes them or hates them—or he won’t keep reading. That essay (with editing) became part of my first book, Tangles and Plaques: A Mother and Daughter Face Alzheimer’s.

I won’t spoil the book by telling you all of Morris and Hannah’s crazy behaviors. As Wells says: “What happened to these distinguished men of letters? Is there a dark side in writers that counterbalances their nobility of expression? How can they write like angels but live like they are possessed?” How, indeed?

I always enjoy reading about the iconic Square Books, opened by Richard and Lisa Howorth in 1977, and the scores of famous authors it attracted, including John Grisham, Jesmyn Ward, Donna Tartt, Beth Ann Fennelly, Tom Franklin, Ace Atkins and many more. (I have been blessed to give three readings at Off Square Books, and for these wonderful booksellers to help with my events at nearby First Presbyterian Church and at the Oxford library.)

I loved learning more about Dean Faulkner Wells, whom her husband Larry calls the “godmother” of Oxford’s literary revival, and “patron and champion of the growing literary community.” I’m anxious to read her book, Every Day by the Sun, which released in March of 2011. The book launch was at the Lyric Theatre, the turn-of-the-century building that had been owned by Dean’s great-grandfather and was used as a livery stable. Later it was turned into a movie theater, where Dean accompanied her Pappy (William Faulkner) to the premiere of Intruder in the Dust. One of the authors who spoke at the book launch, Wright Thompson, remembers the event this way: “We’ll never forget the feeling in that room—the way the town came out and seemed to realize that its emotional core lived inside of Deanie….”

I also enjoyed learning about Larry and Dean’s efforts—along with Richard Howorth, owner of Square Books and Mayor of Oxford for eight years—to save traditional neighborhoods in Oxford from unreasonable real estate development that threatened the town’s historical architecture. As mayor, Howorth “managed to redirect and control development and, in so doing, restore sanity and moral compass to the town’s administration. One of his first actions as mayor was to organize a historic preservation committee.” My husband and Richard were fraternity brothers at Ole Miss back in the 1960s, and we both cheered his efforts to save this town and community that we still love.

I will close with many kudos for the author, Lawrence Wells himself—“the graduate student, the former college English instructor, the writer, the indie press editor and publisher, the bass player, and obsessive compulsive who had published two novels, scripted an Emmy-winning documentary, and optioned four screenplays in LA and New York while editing and publishing other writers.” Wells is the director of Yoknapatawpha Press, which he established with Dean. He was awarded the 2014 Faulkner-Wisdom gold medal for narrative nonfiction. I’m glad to have had that wonderful evening in his kitchen back in 2016, and I hope to see him again on one of what I’m sure will be many more visits to Oxford.