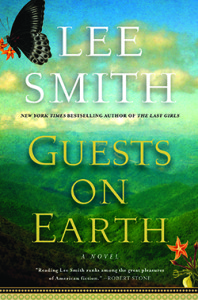 I just finished Lee Smith’s 2014 novel, Guests on Earth, and I am in awe of her. What a masterpiece! Just a few weeks ago I did a post about her memoir, Dimestore: A Writer’s Life, which was also amazing. When I learned that her son had schizophrenia and took his own life, I wanted to read Guests on Earth, which is set mostly at Highland Hospital in Asheville, North Carolina, where Smith’s son was treated in the 1980s, and where her father was a patient in the 1950s. But the most prominent patient was Zelda Fitzgerald, wife of F. Scott Fitzgerald. Her beauty and brilliance are shown throughout the novel, as her talents in dance and painting and writing are revealed, along with some complexities surrounding her marriage.

All of this is told through a fictional narrator, Evalina Toussaint, a thirteen-year-old orphan who is admitted to the hospital in 1936 and is taken under Zelda Fitzgerald’s wing. What fascinated me most about the book was the way Smith treated the “guests” (patients) at the hospital. Well, first of all the way the staff treated them in the book—with respect and kindness and none of the terrible things we might come to expect after One Flew Over the Cuckoo’s Nest. But beyond that, I love the way Smith showed each patient’s flawed humanity gently, as she highlighted their talents and gifts. Whether they were struggling with depression or schizophrenia or other mental health issues, they were first and foremost valuable human beings, portrayed with elegance by the author. If you’re wondering about the title, Smith explains it in her notes at the end of the book:

The title comes from a letter Scott Fitzgerald wrote to his daughter, Scottie, in 1940: ‘The insane are always mere guests on earth, eternal strangers carrying around broken decalogues that they cannot read.’ This novel intends to examine the very thing line between sanity and insanity. Who’s ‘crazy’ and who’s not? What does that even mean? I’m especially interested in women and madness—and in the resonance between art and madness. I also want to show that very real lives are lived within these illnesses.

And she succeeds in Guests on Earth, a novel of historic, scientific, and artistic importance. I recommend it for anyone whose life has been touched by mental illness, but also anyone who loves good literature.